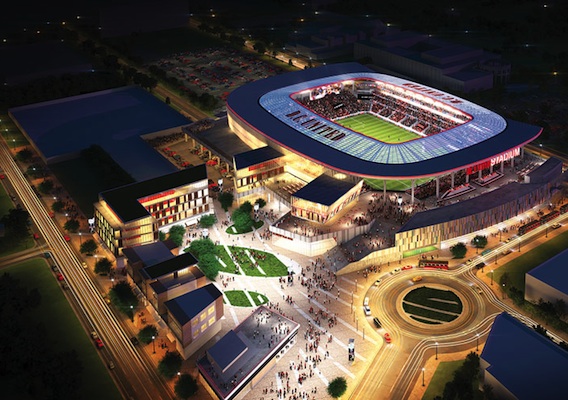 MLS State of the League: The 8 Essential Takeaways

ASN contributing editor Brian Sciaretta discusses four things he likes about the MLS commissioner's state of the league address on Tuesday, as well as four developments that rub him the wrong way.
BY Brian Sciaretta Posted
December 03, 2014
2:23 PM
MLS COMMISSIONER DON GARBER gave his annual state of the league address on Tuesday, and while much of it was predictable spin from the league's top official, there were some interesting takeaways. The spiel included some relatively minor news—like flex scheduling and new sponsors—and some carefully worded statements about the upcoming collective bargaining agreement. Here are some of the things I was glad to hear Garber say, as well as a few comments that disappointed me.

Though it didn't really qualify as news, MLS's decision to partner with USL Pro is a huge step in the right direction. The MLS reserve league was simply not providing enough games for players and it needed to be reworked. Using the USL Pro is a major step in providing meaningful competition to youth and reserve players that should help youth development.

Garber raised an interesting point about the state of the league's youth development when he said MLS now spends more on youth development than it did on salaries around a decade ago. That’s impressive but only if it is being spent the right way. The first step, of course, is to have better coaching and Garber hinted at that with his goal of requiring youth coaches to obtain top licenses. The second step is giving players a large number of competitive games. Starting next year, every MLS team will either have to own or be affiliated with a USL Pro team. Down the road, the ideal scenario will be to have all teams own a USL Pro team because it will provide greater player personnel flexibility and control of the players. For now, however, the current plan of either ownership or affiliation is sufficient because it will simply provide more games for younger players.

Garber was blunt when he talked about expansion in Miami—which has been spearheaded by global soccer icon David Beckham. Speaking diplomatically, Garber said that he believed in the city but he stressed that there needs to be a downtown stadium deal in place before Miami can get a franchise. “We all know there have been some pro sports struggles there so people are questioning whether or not Miami can support an MLS team,” Garber said. “I believe it can but only if it has the right stadium. If we don't have the right stadium, we're not going to Miami.” “We know in Miami that if we don't play in an environment that will be the center of what is happening there culturally, we will not succeed,” the commissioner added. The league recently approved new franchises in Atlanta, New York City, and Los Angeles without stadium deals in place, and the double standard seems like a bookable offense. To be fair, however, MLS has already seen one team fail in Miami and Floridians do not have a great track record when it comes to supporting professional sports. The most glaring example is Major League Baseball's Miami Marlins franchise, which has a glistening new stadium in downtown Miami but struggles to draw despite an enormous population of baseball-loving Cubans. What makes Garber so certain MLS would be a success in Miami when a stadium and positive demographics can’t help baseball? Garber's statements, along with the actions and words of a skeptical Miami city council, it's hard to see Miami coming into the league anytime soon.

"I think that we are going to get a deal done,” Garber said of the D.C. stadium approval process. “We will have a new stadium in D.C., we are going to have a new stadium in Boston, that NYCFC will get a stadium deal done, we'll have a new stadium in Orlando. D.C., Orlando, a new team in Atlanta, Boston, New York—that will give us that power and connection and ubiquity that we have in the Northwest." The Boston area's youthful population and deep soccer roots provides a perfect demographic for MLS, but the franchise has been playing its games in a cavernous NFL stadium far away from the urban center. The fans created a great atmosphere at Gillette Stadium during the playoffs, and clearly deserves better. And now it looks like they might get the venue they deserve. New York City, Atlanta, and Los Angeles will have their own issues moving forward but D.C. United and New England are original teams in very important markets. Stadium deals could elevate two franchises that have been held down for a long time.

Garber's comment that he is open to fostering a deeper relationship with CONMEBOL seemed to get lost in the shuffle. It shouldn't; it's potentially huge. The commissioner did not divulge any specifics but he did mention that a closer relationship mentioned that the South American confederation could lead to either exhibitions tournaments or possibly getting involved with the Copa Libertadores—similar to how Mexican teams currently do. “I will say that we are getting closer to CONMEBOL and even closer to FMF and the leadership at Liga MX,” Garber said. “More today than yesterday this idea that all of us should be thinking about competition that can have this part of the world, this hemisphere, be as important to football and soccer as Europe is to the game of football and the rest of the world - I think we should look at that.” I didn’t like the idea of exhibition tournaments or Garber's misguided nostalgia for the defunct Superliga tournament which ended in 2010. Unofficial tournaments are pointless. But developing a relationship with CONMEBOL is very promising and getting involved with the Copa Libertadores would be a tremendous boost for the league. It is the best international club tournament outside of the Champions League and it would offer the chance to play against teams from many different countries. While the CONCACAF Champions League has its benefits, the Libertadores has greater prestige and better competition at all stages.

When Garber spoke of New York City FC, he practically glowed. On the stadium deal he lamented that the team had stadium site in place early but “lost it.” He then went on to stress that Yankee Stadium was only temporary and that NYCFC would have its own place in short order. His lack of specifics did not exactly bolster anybody's confidence. Any developer will tell you that building within the five boroughs of New York City is full of obstacles and nothing is certain until the first shovel breaks ground. So if the league had, and then lost, its first stadium deal, why would anybody think a second deal will be any easier? The task ahead for NYCFC is huge and the lack of specifics probably has some fans thinking the team will be at Yankee Stadium on a very long “temporary basis.” Garber also was adamant that the Manchester City group had a separate and passionate focus on MLS for the New York team that was apart from the Manchester team. “Uniforms aside, they have a plan that is solely focused on New York City, trying to be a competitor with the Red Bulls, building a great stadium, and doing everything they can to be part of the Major League Soccer movement,” Garber said. That optimism is going to be put to an early test. Garber did not address the elephant in the room regarding Frank Lampard. NYCFC's celebrated designated player has signed with New York but is on loan to Manchester City where he is exceeding all expectations with his superb play. Does anyone think that Lampard is going to leave mighty Manchester City franchise—which shares an ownership group with NYCFC—amid its Premier League campaign so he can join a fledgling NYCFC in March? The prevailing opinion in England is that NYCFC can easily be pushed aside. If this happens—and it seems likely—it would be a huge embarrassment for both the league and Garber. All the insistence that NYCFC is a separate entity will lose credibility.

2. Faith in the Red Bulls ownership

During the press conference Garber seemed shocked that people are questioning the commitment of New York Red Bull ownership. Yes, it's true that the organization built the fantastic Red Bull Arena and has splashed the cash for players such as Thierry Henry, Rafa Marquez, and Tim Cahill. And, as Garber pointed out, the Red Bulls have made the playoffs consistently and won its first trophy, the Supporters' Shield, in 2013. “How anybody can question the commitment this team has had?” Garber asked. “They spent more than any other club, they built and privately financed the most expensive stadium in Major League Soccer. They compete in market where the cost of operations from a marketing perspective and a staffing perspective are more than any other club. They have invested more by significant percentages than any other club in Major League Soccer.” “There is this thing that has this momentum here and it's wrong,” he said. But Garber is guilty of looking backward instead of forward. Credible reports have surfaced pointing to Red Bulls' eagerness to sell the club. With the loss of Henry and potentially Cahill, there is only one designated player on the team—the recently re-signed Bradley Wright-Phillips. Also, the team balked at starting its own USL Pro team—a curious decision to say the least. Garber's comments about the franchise did little to reassure that the Red Bulls are indeed still heavily invested in pursuing success.

Garber pledged that a major goal for the league would be improved transparency in 2015. Sorry, but we’ve heard this before. The league is frankly awful about player acquisition rules—as the Clint Dempsey and Jermaine Jones debacles demonstrated—and seems to make up many other rules as it goes along. “I did say in 2014: Transparency is a priority. Transparency is a big priority in 2015,” Garber said. “One of the things you'll start seeing is that the concepts we have in place that allow players to come into the league, that allow a priority order as to how we have some management as to who gets the rights to certain players outside of our draft and outside of the youth system. All of that will be shared with the public after we come up with way to try to organize it in buckets so people can understand it.” It is now up to the fans and media to hold him to it 12 months from now at the next State of the League. Most, like me, will believe it when we see it.

4. Continued use of away goals

The final thing I didn’t like was Garber’s statement that the away goals rule would continue to be used in the playoffs. This is a matter of personal taste but I have never liked the idea that some goals count more than others. Giving fictitious added meaning to where a goal is scored never struck me as fair. The Liga MX playoffs do not use away goals and instead give the tiebreaker to the team who finished with a better regular season record. At least the regular season is given more meaning. As for away goals, I hope they go away everywhere, not just MLS. I agree with Arsene Wenger, who said: “The weight of the away goal is too heavy, too big and is not justifiable anymore…I think it is a problem in the modern game." Brian Sciaretta is an American Soccer Now columnist and an ASN 100 panelist. Follow him on Twitter.