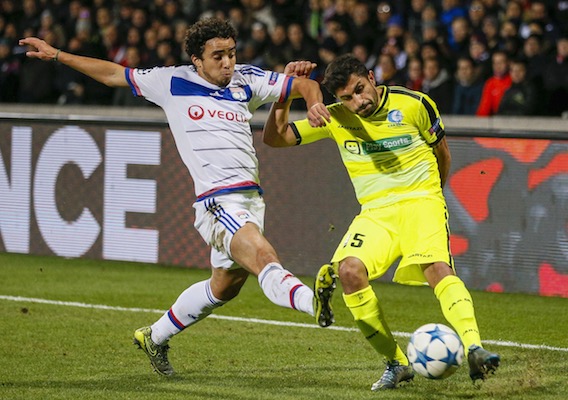 A versatile dual-national midfielder with Champions League experience, Saief is interested in playing his international soccer for the United States. Brian Sciaretta spoke with the Florida native.
BY Brian Sciaretta Posted
December 15, 2015
1:00 PM

KAA GENT ATTACKER KENNY SAIEF made headlines last week when he told Israeli network Sport5 that he would consider playing his international soccer for the United States instead of Israel.

Because Saief represented Israel at youth level, playing for the United States would entail making a permanent one-time switch with FIFA. Born to a Druze family in Panama City, Florida, Saief has never returned to the country of his birth since he left at the age of three. Despite that, Saeif seems to be leaning that way should he receive a call from Jurgen Klinsmann—which he says has not happened yet.

“I knew from someone that the United States was scouting me,” Saief, 21, told American Soccer Now from Belgium. “If I get a call from the United States, I think I would probably play for them. Which team is better at football? I think the United States is better. They play almost every four years in the World Cup. As a footballer they are better, I think.”

This stance marks a shift from a statement he gave to Israeli media in February following the passing of his father, when he said his father had asked him to be patient and wait for an Israel call-up.

But in the interview with Sport5, Saief also expressed frustration that Israel—in a transitional phase after head coach Eli Guttman quit in October—had not called him up and said he has felt unappreciated as a result. Since emerging as a starter for Gent, the reigning Belgian champion, Saief may well have opened up another possibility with the U.S.

A U.S. Soccer spokesperson confirmed that the federation has monitored Saief's progress.

Should Saief indeed elect to play for the Yanks, he would bring rare Champions League experience into the mix and will likely be the only American player to feature in the knockout stages of the 2015-16 edition. He made appearances in five of Gent’s six games in the group stages with four coming in the starting lineup.

Gent was picked by many to finish last in a group this year with Zenit St. Petersburg, Valencia, and Lyon, but Saief and Co. finished in a surprising second place to qualify for the knockout stages. In doing so, it became the first Belgian team in 15 years to advance to the final 16 of the world’s most prestigious club tournament.

“It's crazy. It’s unbelievable,” said Saief. “If you asked me before we played, I would never say we'd go on because if you see all the players, it is the first time they played Champions League, almost everybody. We were planning what we heard from the coach and the president that we were trying to go for the third place and to keep going in the Europa League.

“But when we played the first and the second game, we saw that we were really better than the other teams. We played really good football, so why don't we take points and try to go on? That's what we did.”

Coincidentally, Saief is in some ways reminiscent of the national team’s only current Champions League player (not including Julian Green, who made a cameo for Bayern), Borussia Monchengladbach’s Fabian Johnson, in that he is extremely versatile positionally.

A left-footed player, he said he prefers to play as either a left or right winger but can also play all across the midfield, as well as at forward. Saief, currently being used as a left midfielder for Gent, has also played a few times at left back.

With his recent comments has come a sharp increase in interest back in the United States. When asked about it, Saief seems flattered.

“I hope I can show what I can do and let them be happy,” he said. “If I play for the United States, I can give the national team my best—but let's hope that first I can get a call.”