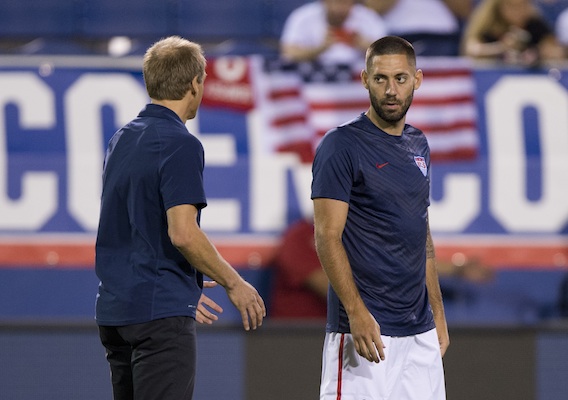 THERE’S NO DENYING IT: Saturday was a dark day for the United States men’s national team program.

Early in the afternoon, the U-23’s lost to Honduras in the semifinal round of Olympic qualifying and missed out on an automatic berth to Rio; the team now must win back-to-back games against Canada and Colombia to qualify.

Then, in the evening, the senior squad lost to Mexico 3-2 in extra time to miss out on qualification for the 2017 Confederations Cup.

The American fan base is strongly divided, with many calling for Jurgen Klinsmann’s head, while another contingent of fans remains steadfastly behind him.

But Sunil Gulati had already said that Klinsmann wouldn’t be fired, even if the U.S. failed to qualify for the Confederations Cup in Russia. The loss to Mexico was also Klinsmann’s first as U.S. coach, and his record against El Tri is still an impressive 3-1-3.

Gulati says Klinsmann's job is safe, and there aren't parallels with Bradley being fired after losing '11 GC final pic.twitter.com/Q3lEVtj8at

Against Mexico the U.S. fielded nearly an identical lineup to the one the Americans used in Brazil last summer. There’s nothing wrong with that, especially considering it represented the most proven players the U.S. had available. But those choices came after 15 months of experimenting by Klinsmann that brought about little real change. And four years into his tenure, the team has shown virtually no sign of bringing about the more proactive style Klinsmann promised when he took the job.

No matter what happens next, the coach will continue to be a lightning rod among fans and the media.

But one silver lining in all of this will, or at least should be, a substantive shakeup of the U.S. player pool as it heads into World Cup qualifying.

In the defeat to Mexico, DaMarcus Beasley and Kyle Beckerman probably played their final game with the U.S. and, with little real competition for the Americans in the early stages of World Cup qualification—which starts on November 13—it’s probably time for the U.S. to start developing full-time replacements for Clint Dempsey and Jermaine Jones as well. Chris Wondolowski, Graham Zusi, and Brad Evans should be dropped entirely to make room for younger call-ups.

This isn’t to say that it’s time for radical changes, like bringing in 17-year-old Cameron Carter-Vickers and 20-year-old Matt Miazga to replace Geoff Cameron and Matt Besler, or Emerson Hyndman to replace Michael Bradley, but it is time to move towards younger, viable replacements for the aging veterans.

Danny Williams needs to be given a real opportunity to win the job as the U.S.’s holding midfielder, or Michael Bradley needs to be pushed back into the position—one that he occupied for many years in a U.S. jersey. If Bradley were to be pushed deeper into the midfield—where he belongs—it would also open up space for a true No. 10 like Benny Feilhaber or Lee Nguyen.

The biggest hurdle in this process, however, is Klinsmann himself. While he has shown an impressive ability to make game-changing substitutions over the years, it’s shocking how often he gets his initial choices wrong. And it’s troubling to see the lack of forethought that goes into many of his decisions.

On Saturday, the U.S. received a boost from Bobby Wood as an extra-time substitute, who wasn’t even on the roster until the day before the game. If Wood had not been added to the roster, what was Klinsmann’s plan if the U.S. needed a late goal and a boost up top—throw on Chris Wondolowski?

Unfortunately, this wasn’t the first time U.S. fans saw a lack of planning by Klinsmann.

Last summer, in a disastrous decision—and one that most coaches would have avoided—the coach failed to bring a like-for-like striker to Brazil for Jozy Altidore. When Altidore went down to injury only minutes into the tournament, the U.S.’ attack plan was thrown out the window for the rest of the competition.

A properly organized coach would have had a “What if?” strategy in the event of an injury to Altidore. Klinsmann’s solution was to push Dempsey and Bradley higher up the field and further away from their natural positions.

In January Klinsmann missed another opportunity to cast a wider net as he filled the January camp roster with 12 potential U-23 players to help that team prepare for Olympic qualification, seemingly prioritizing the youth program over the senior team.

In the past, the January camp has been used to unearth Major League Soccer players who wouldn’t get a look in a normal national team camp and many of those players have gone on to be impact players for the team in important games. Klinsmann himself has done this in the past, but this year Gyasi Zardes was the only “breakthrough” player (and his real impact is debatable).

This summer Klinsmann allowed a number of players to miss the Gold Cup when their clubs asked for them to be given time off. No one can say for sure whether those players would have helped, and the club/country balance is always a difficult one. But if push came to shove, Klinsmann probably would have gotten his way and those players may have helped the U.S. avoid losing to Jamaica in the Gold Cup semifinals and maybe the CONCACAF Cup playoff altogether.

All of this seems more than a little strange considering Klinsmann is considered a talented “big picture” guy. That may be the case, but coming up with ideas and implementing them are two different skill sets.

With World Cup qualifying only a month away, Klinsmann the technical director needs to tell Klinsmann the head coach to drop the older veterans. Players with no realistic shot at being serviceable players in 2018 need to be sent packing in favor of younger players who are already in the pool or pushing for a spot.

Klinsmann isn’t going to get fired—at least not right now—and if we’re honest, he doesn’t have any truly world-class players at his disposal. But there is a core of youngsters who need to be bled into the team to help prepare for the 2018 World Cup.

That time is now.