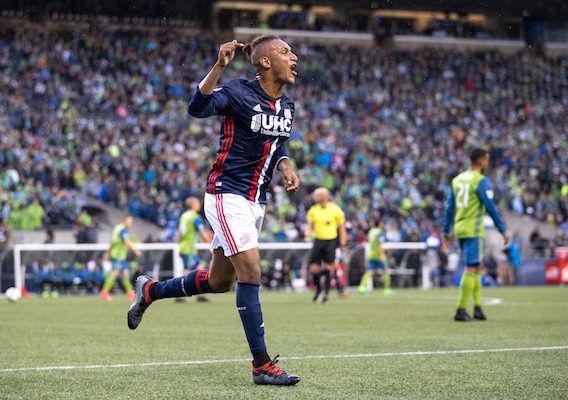 New faces, veterans who have been on the outside looking in, will get a chance to show their worth in a high-pressure environment over the coming month. Here is Brian Sciaretta's roster analysis.
BY Brian Sciaretta Posted
June 25, 2017
2:00 PM

BRUCE ARENA unveiled his roster for the group stages of the 2017 Gold Cup Sunday afternoon—a list that features a mix of veterans and young players who will be hungry to make a positive impression over the next few weeks.

The group stages should not be challenging for the U.S., which plays Panama, Martinique, and Nicaragua. After those three matches, however, Arena will be allowed to augment his roster ahead for the knockout stages.

The United States has not won the tournament since 2013 and since victory in the Gold Cup is tied to participation in the Confederation Cup, the stakes are relatively high. But the most important goal right now is for Arena to expand the player pool and perhaps experiment, something he has yet to do since taking over from Jurgen Klinsmann last November.

Here are my thoughts.

For the first time in years, a U.S. national team roster for a meaningful competition does not include Michael Bradley or Jermaine Jones. Those two have been the heart of the team’s central midfield since 2011 and now Arena is going to have the opportunity to look at other options. While it seems likely that Bradley can be added after the group stages, the tournament’s first three games, as well as Saturday's friendly against Ghana, will give others a chance to step up.

Acosta, 21, has been a regular under Arena in 2017 and played well in his first central midfield start at Estadio Azteca. Despite his youth, the FC Dallas product will be expected to perform well in the Gold Cup. He could very well find himself at the World Cup next year if he uses this tournament to round out his resume.

If he gets on the field during the Gold Cup, Cristian Roldan will make his international debut and will be cap-tied to the U.S. (At the moment he is eligible for both Guatemala and El Salvador). Roldan, 22, had an enormous year in 2016 which ended with him winning MLS Cup and becoming a key part of the Seattle Sounders’ midfield. Unlike Acosta, Roldan will not have a lot of time to integrate but he looks to have the talent to be part of this team.

For McCarty and Corona the situation is different. Both are national team veterans who have had experiences at this level. It 2016, neither were in the team’s picture but both have raised their games in 2017. Corona is part of a surging Tijuana side and McCarty has helped invigorate the Chicago Fire, currently the second best team in the league. This might be their final shot for both with the national team, so the pressure is on.

If Arena looks to go younger, a pairing of Roldan and Acosta in the middle of the field could result in an interesting blend of youth and skill.

When he was hired in November, there were questions about Arena’s willingness to be aggressive on the dual-national front. This Gold Cup team could see two players become cap-tied while a third, Kenny Saief, became tied to the U.S. program by virtue of filing a one-time switch.

Dom Dwyer and Roldan will almost certainly become cap-tied as both players are expected to play. The English-born Dwyer would have been capped long ago but it wasn’t until March when he became an American citizen. He has been among the most consistent forwards in MLS over the past four seasons and is known for playing with intensity and grit. Roldan has been overlooked as a youth player but raised his game over the past 18 months to a point where he is impossible to ignore.

The debut of Saief will be the most intriguing. Unlike the others, he knows no other player on the team and hasn’t set foot in the United States since he was three years old. The left winger brings Champions League experience and a hunger to be part of a World Cup team to the table. He has the talent but can he fit into this team? It’s an important question. If he can, he could potentially be a big part of the Arena’s plans.

While much of the talk will be on the team’s newcomers, it will be pleasant return for Joe Corona and Eric Lichaj, two veteran players who have been on the outside looking in for several years.

Lichaj once looked to be growing into the team under Bob Bradley but never seemed to be in Klinsmann’s plans aside from a few token cameos in friendlies. He has been one of the best players for Nottingham Forest in recent years and what he provides is valuable cover at both right and left back. The right back position appears to be DeAndre Yedlin's to lose but no one has claimed the back-up job. (Graham Zusi and Timothy Chandler have been mentioned.) The left back position is not as firm but Jorge Villafana seems to have an edge while DaMarcus Beasley is still around.

Lichaj, 28, is in the prime of his career and has experience on both sides of the backline. He’s wanted this chance to prove himself again and he has it. The 2011 Gold Cup was the last time he was firmly in the team’s plans. Now six years later, he could finally reemerge.

In central defense, two Matts, Miazga and Hedges, are worth keeping an eye on. Neither is likely in the team’s first-choice roster but both have the ability to break into the fold.

Miazga, 21, is owned by Chelsea but went on loan to Vitesse last season and helped that club win the Dutch Cup. Miazga's resume is solid: He’s been an MLS best XI player, earned a contract from one of the world’s biggest teams, and now has several clubs pursuing him for a loan deal.

Hedges, 27, has been Mr. Consistent during his career and that is why he was named the captain of FC Dallas at age 23. Since then, he has been the best American central defender in MLS, providing stablility to one of its best teams. He brings maturity and leadership to the national team in addition to skill. After being snubbed by Klinsmann, he should be eager to prove himself in his first major tournament.

Up to six changes await

After the group stages, Arena can make six changes so the players on this roser need to make the most of their opportunities.

The names waiting in the wings are established first-team starters. While Christian Pulisic is unlikely to appear due to club requirements, Clint Dempsey, Darlington Nagbe, Michael Bradley, Jozy Altidore, and Tim Howard are likely additions to the team.

But if the players prove themselves and perform well over the next two weeks, then maybe Arena makes fewer changes. There should be plenty of incentive for players to do well. The opponents are weak, but the pressure should be high.