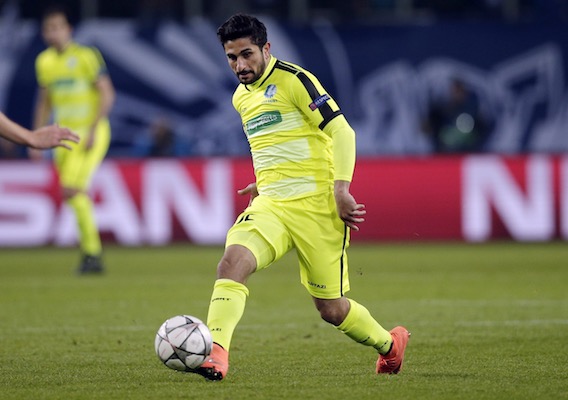 Kenny Saief Tells ASN: "This Is the Right Step for Me"

The 23-year-old Israeli-American made his onetime FIFA switch and will now play his international soccer with the United States. ASN's Brian Sciaretta spoke to Saief about the Gold Cup and much more.
BY Brian Sciaretta Posted
June 25, 2017
6:05 AM

FOR MOST PLAYERS on the 2017 Gold Cup team, the tournament offers a chance to impress head coach Bruce Arena and perhaps make a case to sneak into his plans moving forward. For Kenny Saief, these games represent a much bigger opportunity.

Saief, 23, was born in Panama City, Fla., to Israeli parents of the Druze religion—of which there are only an estimated 800,000 to two million in the world. His parents left Florida when he was around three-years-old and Saief has not set foot in the U.S. since.

In the two decades since he left the United States, Saief has blossomed into a very good soccer player who now boasts Champions League and Europa League experience. He first began getting noticed in the 2013-2014 season when he starred for Ramat HaSharon as a teenager. The club was relegated at the end of that season but Saief did enough to secure a transfer to KAA Gent in Belgium where he now is a key contributor.

In the years since his breakout, Saief played for Israeli youth teams as well as the full national team in two non-cap-tying friendlies. But back in May he began to have conversations with Arena’s coaching staff to play with the United States national team. To do so, it would require Saief to file a one-time change of association switch with FIFA and permanently tie himself internationally to the United States.

Saief recalls the discussions went well and his decision did not take long.

“The way they spoke with me, I liked it very much,” Saief told American Soccer Now. “You feel it on the inside. This is the right step for me. I think it's a big pleasure to play for the United States. It is a much better national team than Israel. It's an important step. I always wanted to play at a high national team level. To get a call from the U.S. national team was very special. I was very happy. It gave me a lot of energy and motivation.”

When Saief’s name appeared on the preliminary Gold Cup roster in early June, the process of moving his allegiance to the United States was in place. But the process of leaving Israel’s set up for good caused some anger among its supporters and those in the media. Saief was quick to dismiss.

“They were very disappointed when they knew that I decided for the United States,” Saief said of the reaction in Israel. “It was my decision. I am completely and 100% [behind] with I say and what I want for myself. I didn't mind anymore about what they're saying.”

Leo Krupnik, 37, is very familiar with Saief’s situation. Born in the Soviet Union, Krupnik grew up in the United States and developed into a professional soccer player. He spent most of his playing career in Israel, including one year for Maccabi Haifa, where he lead the team in minutes played en route to winning the title. In the final years of his career at Maccabi Netanya, Krupnik successfully obtained his UEFA “A” coaching licenses and Sports Management certificate from Wingate University in Netanya.

Krupnik recalls that he tried to argue the case for a U.S. call-up to U.S. Soccer youth technical director Tab Ramos, who was Krupnik's teammate during a brief stint with the Metrostars in 2002.

“He's one of those players where he was not a star in the Israeli youth system but he was always overlooked,” Krupnik said. “Players like these should be valued a lot more because he's done everything through is hard work—going from a tiny club Ramat HaSharon that actually got relegated to being one of the top players at Gent.

"I think it's a big loss for Israel but I can't blame Kenny. He was willing to be part of their national team. He was called into their full team and he showed up, sat on the bench, and they didn't play him. How ridiculous can that be? It's unfortunate for Israel that they are losing a player of Kenny's caliber.”

The U.S. has begun to assemble in Nashville for its initial preparations for the Gold Cup. The team will train there before heading to Connecticut for a tune-up friendly against Ghana, where Saief might make his American debut.

The thought of coming back to the United States is something that brings a smile to his face.

“This is the first time I will be back,” Saief said. “It will be special for me. I always wanted to go back to the United States but I never had the time with football. I always felt I belonged to this place. Now I have the opportunity to do it. To go back as a player for the national team is very special.

“I hear a lot about the big buildings and the nice people,” he added. “For the moment I am just thinking about football so I don't think I will have the time to visit places. But I hope the next time I go it will be for a vacation and I can enjoy the views.”

On and off the field, Saief does not expect the transition to be difficult. The one American player he knows personally, Bobby Wood, is not on the Gold Cup roster. On the final day of Gent’s season, he scored a goal past Brugge’s American goalkeeper Ethan Horvath but Horvath is not on the roster either.

When asked about integrating, Saief is quick to point out he is a “friendly guy” and is not expecting it to be difficult. He also hopes his Champions League experience—an impressive run to the knockout round in 2015-16—and the very intense nature of his on-field personality will prove his worth to his teammates.

“He’s been a good player with his club team in Belgium, and he plays a position where we can always use help, a left-sided midfielder,” Arena said. “He can play left back as well. We watched him on tape. He looks to be a good player, but you don’t know until you get him in.”

While Arena’s plans for him are still unclear, one of Saief’s hallmarks in the Belgium is his versatility. Throughout most of his career, he has been an attacking midfield but increasingly he has been playing as a left wingback in a 3-5-2 formation for Gent. Regardless of where Arena puts him, Saief will be happy just to be on the field for his new national team.

“I am the kind of player that can play a lot of positions. Whatever the coach decides I will be happy with. If he says to play goalkeeper, I will play goalkeeper [laughter].”

Krupnik, however, is willing to be a lot more specific about the impact he sees Saief having for the U.S.

“He's the type of player the U.S. team needs,” Krupnik said. “There are not a lot of left-footed players in the mix. He can play a number of different positions on the left side. He's played for Gent in a 3-5-2 as sort of a wing back but in the modern game he is an ideal left back where he can attack from within. I also see him as second striker where he comes in from deep behind another striker. That's what Gent has been doing—they find him a place to play. He fits the system and it doesn't matter where they put him, he's performing.”

While far from a given, should Saief perform as well for national team has he does with Gent, there is a good chance he could be in the team moving forward. The thought of possibly playing in a World Cup would fulfill a childhood dream, but for now Saief is focused just on lifting the Gold Cup in July.

“Of course it's a dream of every player to play in the World Cup but I need to prove myself first to my team,” he said. “As players we have to think week to week. We cannot look far ahead. In a year, a lot of things can change.

“The most important thing now for me is the Gold Cup and to show the coach I can play with them. I know that the United States hasn't won it in four years and I hope we can do something about that.

"You want to win titles. I hope can win it.”

Do you think Saief will make an impact with the U.S. national team? Share your take in the Comments section below.