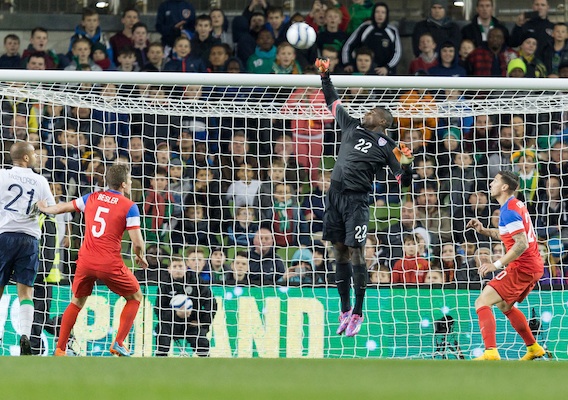 GK Bill Hamid Is MLS' Best, Should Be USMNT's Next

We're not exactly going out on a limb by suggesting that Bill Hamid deserves a call-up to the U.S. national team's January training camp. The 24-year-old goalkeeper should enter camp as the No. 1 option.
BY John Godfrey Posted
December 21, 2014
10:31 AM
Editors note: A group of ASN staffers have created a 23-man roster for the January U.S. national team camp. We will be unveiling our proposed squad in the coming weeks and crafting arguments for every name on our list. TAKE A LOOK at this partial list of American backstops who have been named Major League Soccer's goalkeeper of the year: Brad Friedel (1997), Zach Thornton (1998, 2009), Tony Meola (2000), Tim Howard (2001), Brad Guzan (2007), and Kasey Keller (2011). On December 5th D.C. United's Bill Hamid joined this illustrious group thanks to a breakout 2014 campaign. The 24-year-old Virginia native managed a 1.13 goals-against average despite facing 110 shots, helping Ben Olsen's side overachieve its way to the top of the Eastern Conference standings. Hamid is a gifted shot-stopper blessed with agility, size (six-foot-three, 225 pounds) and solid positioning instincts. He also plays a position that tends to favor experience over youth, evidenced by the three 30somethings (Howard, Guzan, Nick Rimando) ahead of him in the U.S. national team pecking order. With Howard on hiatus, however, Hamid becomes the clearcut choice to join the American troika of backstops whenever the national team convenes. Especially in January. And not just as a roster-filler. Even though Hamid has been named to multiple U.S. training camps over the past few years, he still only has two caps—the most recent coming against Ireland on November 18. Yes, the U.S. took it on the chin in that 4-1 defeat, but nobody in their right mind would blame Hamid for the final scoreline. He absolutely deserves another look. And given our strong belief that the 35-year-old Rimando has nothing left to prove and does not need to be called in, Hamid should enter camp as Klinsmann's No. 1 option.


Bill Hamid
John Godfrey is the founder and editor in chief of American Soccer Now.