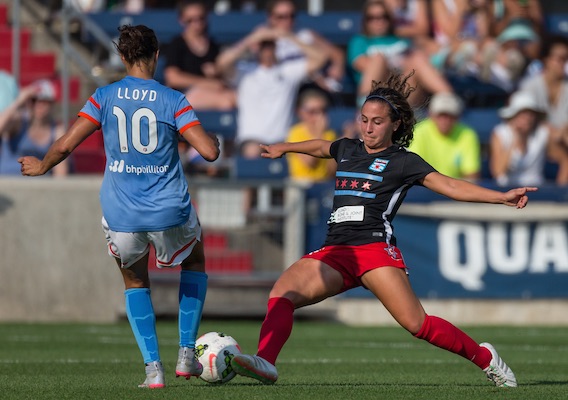 The former University of Virginia standout, 22, will get her first chance with the 2015 World Cup champions as Jill Ellis' side prepares to play four friendlies in the month of December.
BY John D. Halloran Posted
December 02, 2015
6:00 PM

AS THE UNITED STATES women's national team begins to make its final preparations for Olympic qualifying and embarks on a series of four friendlies this month, it will do so with a number of new faces, including first-time call-up and Chicago Red Stars' midfielder Danielle Colaprico.

In a state of transition closing out the 2015 calendar year and less than three months away from qualifying, the U.S. is in the process of retooling its squad following the retirements of four World Cup veterans. Head coach Jill Ellis is on the lookout for new talent and this time around that search will include the 22-year-old Colaprico who has previously represented the U.S. on the U-23 level.

And while representing the full national team has always been a goal for Colaprico, the timing of the call-up still caught her by surprise. Speaking to American Soccer Now, Colaprico recalled the moment she found out she'd be getting a chance with the senior side.

"When I first heard about it, I was a little shocked. I didn't think it was going to happen this soon in my career and wasn't expecting it, but I was very excited about it," said Colaprico. "The nerves started to kick in a little, but they've settled down. I'm just very happy that I'm being given this chance and it will be a great opportunity."

After a standout career at the University of Virginia, Colaprico was selected by the Red Stars in the first round of the 2015 NWSL draft. With Chicago, she earned NWSL Rookie of the Year honors and credits her experiences in the league with helping prepare her for the next level.

"The speed of play is a lot different," said Colaprico. "In college you have a lot of time on the ball and you can take three and four touches on the ball every time you get it. Once you're in the [NWSL], the speed of play picks up and you really need to be aware of your surroundings and know where the next pass is before you get the ball. You can really only take one or two touches or someone's going to be right on you. The speed of play was the biggest thing that was different for me."

Colaprico was also quick to give credit to her club teammates and said that the Red Stars' success as a team helped lead to her individual accolades this year.

"I love being in Chicago. I didn't know what it was going to be like coming in as a rookie—I thought it was going to be a lot harder than it was. I think everyone was super welcoming which definitely played a role in how I was able to be so successful my rookie season," said Colaprico. "I think individual awards come from a team doing well, so if the team's not doing well, people don't usually win individual awards like that. I think it says a lot about the team and how well we've done."

In addition, the New Jersey native gave credit to Red Stars' head coach Rory Dames for her progress as a professional.

"He's been great," said Colaprico. "I didn't really know him that well coming into Chicago, so I was a little nervous about that. He's been very supportive and it's nice to have a coach who has a lot of confidence in you because it builds your own confidence. It makes me feel as if I'm not just a rookie on the team and I have a larger role. He gave me the freedom to do that which was nice. It allowed me to play my game and be the player that I am, so that was very helpful coming into Chicago."

With the Red Stars, Colaprico often plays as a holding midfielder. That fact may give her an advantage when she reports to camp with the U.S., as it is a position the Americans need to solidify in the coming months.

At the 2015 World Cup, the U.S.'s switch to three center midfielders late in the tournament finally unleashed the American attack. But that combination was based heavily on Lauren Holiday anchoring the midfield trio as the team's No. 6 and Holiday retired last month. Without a natural replacement among the World Cup veterans, Ellis has begun searching for replacements, and Colaprico believes she can help the U.S. in the position.

"I definitely think that holding mid is my main position at this stage in my career," said Colaprico. "I think I can definitely help [the U.S.] in that area. They don't have that many center midfielders right now, so that's what they're looking at. If I can do really well at camp, I can have a chance at making the Olympic roster."

When Colaprico heads to camp this week, she'll also have the advantage of seeing a number of familiar faces from her days at the University of Virginia. College teammate Morgan Brian has become a mainstay on the senior team over the past six months and Virginia head coach Steve Swanson is also an assistant with the U.S.

Colaprico credits both of them with helping her get to this stage in her career.

"They've definitely had a huge impact on where I am today. Both of them have pushed me a lot. It's nice having them there. Steve has done so much over the past four years. He's always been there, always done extra work with me when I needed it. He's always pushing me to be better—nothing's enough," Colaprico explained. "It's nice having him there to push me.

"It's obviously nice having Morgan be at camp with me, to have that support system. Even just playing with Morgan, she's hard-working, and humble, and all these different things that are so great. I look up to Morgan and she's one of my best friends." Colaprico added, "It's nice to have someone to look up to and see what it actually takes to be on the full national team, to see what I have to do personally to get there."

According to Colaprico, Brian was also excited her former teammate would be getting a shot with the national team and Colaprico herself is excited to renew their on-the-field partnership.

"She congratulated me and she's happy that people her age are getting called in because she's really close to our age group. I think she's really excited to have me there. We love playing together... I hope she says the same," Colaprico joked. "That's one of my dreams, to play with her in the center of the field on the national team because it would be awesome and we have that chemistry on and off the field. I think she's excited to have me there and I'm excited to be able to play with her again."

For now, Colaprico says she's focused on the task at hand and fully believes she can turn this opportunity into an Olympic roster spot.

"I'm healthy and I'm ready to go. I'm super pumped to play some good, quality soccer with some awesome players—players I've watched all my life and looked up to."

"For this camp, I want to play well, make an impact right from the start. I think that's important. I definitely would like to, hopefully, get my first cap and I think that's something that's very reachable," Colaprico continued. "I want to get the experience, I want to play well, I want to work hard. My goal for this next year is, obviously, to make the Olympic roster. That's something I'm fighting for. It starts with this first camp and we'll see how I do there."