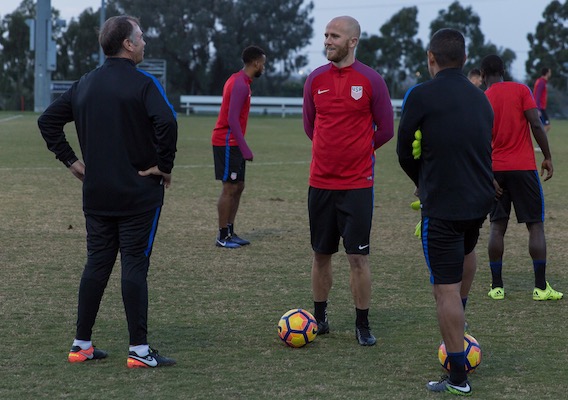 Coach & Captain Are in Sync as U.S Prepares for Jamaica

SANTA CLARA, Calif.—Bruce Arena and Michael Bradley are more than just coach and captain—they go back. Way back, as a matter of fact.

"I’ve known Michael since he was a baby—not a kid," Arena said today in Levi's Stadium, one day before the Americans face Jamaica in the Gold Cup final (9:30pm ET; FS1, Univision, UDN). "I probably saw him the week he was born."

For Bradley, this familiarity breeds anything but contempt: "It's been very, very enjoyable," Bradley said, remarking on Arena's second run as national team coach. "From the beginning there was a real sense within the group that this is what it’s supposed to feel like."

And this is where the Yanks are supposed to be—in a Gold Cup final, with a chance to win a CONCACAF tournament and hoist a trophy.

After the dysfunction that marred Jurgen Klinsmann's tenure as national team coach and led to a fourth place finish in the 2015 Gold Cup, there's a sense of confidence around the team that has been absent for quite a while. Not coincidentally, Bradley, who has struggled to find consistency on the international stage since the 2014 World Cup, has been playing his best soccer in years.

Many pundits and fans believe that Klinsmann's head-scratching approach to player management—particularly his noncommital handling of the midfield—led to confusion, bad losses, and ultimately his dismissal.

Since taking over the U.S. national team in November, Arena has emphasized communication and clarity, and the Brooklyn native's record is a sparkling eight wins, five draws, and no losses.

"When Bruce and his staff came in in January, I think the tone they set from the beginning—in terms of creating an environment where everybody feels a part of it, everybody is all in, where players are challenged and pushed to take big roles in terms of what goes on every day…it’s been great."

"I’ve enjoyed the opportunity to play for Bruce again. I certainly appreciate the trust and the confidence he’s shown in me in this stretch. For any player, when you have a coach who gives you that you want nothing more than to pay that back every single day and in the biggest moments."

Likewise, Arena appreciates Bradley's cerebral approach to the game and his take-no-prisoners mentality.

"He makes my job easier because we have a very focused individual—a focused captain—and he wants to play in the World Cup in 2018," Arena said. "Since I’ve had Michael, from January on, he’s been a great leader in the program."

Since he's known Michael, going back nearly three decades, he has noticed something special.

"I saw him around the game an awful lot as a young kid," Arena said of his captain. "First of all I never thought he’d grow the way he’s grown physically. Knowing his family, you never would have guessed that.

"There’s a focus. He has inherited a lot of his father’s qualities. He’s a very dedicated professional. He understands a lot of other things outside the lines, which has helped him as a player as well. He’s been terrific in that sense because he continues to grow every year as a player, and it’s interesting to me because he’s at an age where you wouldn’t think that would happen.

And Arena knows he never has to worry about Bradley's commitment or intensity—the captain is all in, all the time.

"If you know Michael Bradley, everything is important to Michael. He’s a very serious professional, very focused. The players follow his lead and he’s been fantastic in the Gold Cup."

Arena, 65, shares something else with his captain: a burning need to win.

"I like what I do and I’ve always been a competitive person," Arena said. "You work every day to try to be successful. You take on challenges that are interesting. And this has certainly been an interesting challenge since I’ve come back to the U.S. team in November.

"It’s been a lot of fun to try to put some of the pieces of the puzzle together. At this point in my coaching career this is probably the best challenge I could have undertaken.

"That’s what keeps me going every day."

Bradley turns 30 next week—a significant landmark in a sport that requires constant running and features few stars who continue to sparkle deep into their thirties. Bradley knows the stakes are high in tomorrow's contest, and he is all business.

"The chance to play with a trophy on the line, the chance to play in a final, you don’t get that many of these opportunities in your career," Bradley said, his intense green eyes blazing. "We’re very cognizant of that."

Does it matter to him that tomorrow's opponent is Jamaica and not Mexico, the Yanks' biggest rival?

Not in the slightest.