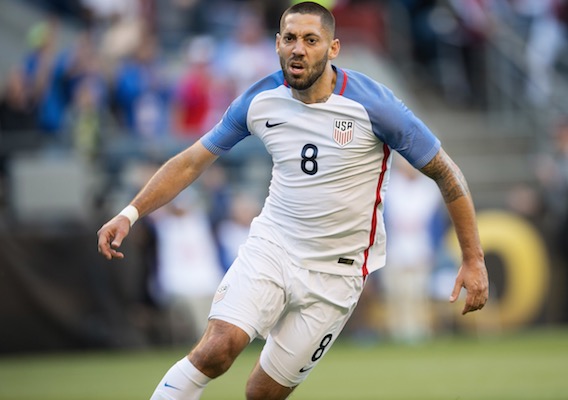 FOR JUST THE THIRD TIME EVER, the United States men's national team won a knockout game against a non-CONCACAF opponent and will now advance to the semifinal round of the 2016 Copa America Centenario. It was not a proactive game from the U.S., which was under siege the last 30 minutes, but it was gutsy and hard fought.

Every American gave an unbelievable effort on the defensive end. The downside of starting the same 11 players  for the three group stage games and then making only one change for the quarterfinal is that the team is fatigued. That was apparent in the second half and the legs of many of the players were heavy.

The United States didn’t play the beautiful game and the possession game was non-existent for most of the second half. Still, the tam was able to kill off a game seemingly through heart and willpower alone.

Here's a look at how the individuals performed.

Brad Guzan: It was a tricky game for Guzan who was busy despite the fact that none of his saves were tough. Still he was there when the team needed and his best moment came on a save in first-half stoppage time. Rating: 6

Fabian Johnson: Switching to right back in place of DeAndre Yedlin, Johnson was not particularly effective getting forward and he had some turnovers. But his defending was clutch all game long against Jefferson Montero—a tough customer. Rating: 6.5

Geoff Cameron: Cameron had a very good game aside from a botched clearance in the 18th minute that nearly cost the U.S. big time. He worked extremely hard in the backline when it was under siege and came up with some big clearances. Rating: 7

John Brooks: Brooks had another very good game. His one error came late as he had a near own-goal that flew inches wide of the goal. But his ability to clear balls and win 50-50 duels was beyond impressive. Rating: 8

Matt Besler: The Sporting Kansas City mainstay was the unsung hero of the game. He got the start and played out of position at left back. He didn’t miss a beat and his cross was a big part of the Yanks' second goal. Rating: 7.5

Jermaine Jones: It was a tale of two halves for Jones. He had a wonderful assist on Clint Dempsey’s opener and got back on defense to force turnovers. In the second half, he came out poorly and committed an early turnover. Then he picked up a red card for putting his hands in an opponent’s face. It was harsh call on a new rule, but Jones needs to know better. He will now miss the semifinal on Tuesday. Rating: 5.5

Michael Bradley: Bradley had a few bad passes that resulted in scoring chances for Ecuador—the most glaring came in the 18th and 45th minutes. But he also forced a lot of turnovers. His running and effort proved instumental in the final 20 minutes. He had some shortcomings but his leadership was an important factor in the win. Rating: 5.5

Alejandro Bedoya: The Nantes midfielder had a good first half on both sides of the ball but should have scored on a great opportunity in the 42nd minute. In the second half he was clearly fatigued and struggled with weary legs, committing a foul that gave Ecuador a goal and cost him a chance to play on Tuesday. Ratings: 5.5

Gyasi Zardes: For all the talk about his bad first touch, his effort was absolutely crucial to the win. He covered a ton of ground and willed himself to score the winning goal—thanks to both winning the initial header and to get himself into position to tap in the goal. No matter what, he was a true difference maker. Rating: 7

Clint Dempsey: It was a magnificent performance from Dempsey. While he did not touch the ball that often, whenever he did, he created opportunities. He scored the opening goal. He should have had an assist on Bedoya's missed chance in the 42nd minute, and then he earned the assist on Zardes' gamewinner. Dempsey even made a few nice defensive plays. He was the Man of the Match. Rating: 8

Bobby Wood: Another first-rate effort from Wood, who gave Ecuador’s defense fits from the start of the game. He was involved in the build up to both goals and he really stretched the game for the U.S. in the first half. Late in the second half he worked wonders holding the ball in possession. Rating: 7

Graham Zusi: The Sporting Kansas City veteran replaced Bedoya late in the game. He didn’t do much to reverse Ecuador’s siege during the final 30 minutes but he made some nice defensive plays to help in the win. Rating: 5

Kyle Beckerman: Like Zusi, Beckerman made some important defensive plays but his possession and passing game did not stand out when Ecuador raised its game. Rating: 5

Steve Birnbaum: Came on in stoppage time to run some clock: Rating: NR

Jurgen Klinsmann: The coach got it right. In particular he handled the suspension to Yedlin brilliantly. The decision to start Besler at left back was risky but it paid off. Klinsmann also has kept the starting lineup mostly the same and, as a result, it looks like a cohesive unit. The downside is fatigue and perhaps he waited too long to make substitutions. Now into the semifinals, he will have to make even more changes—and that will be interesting to monitor. Still, the coach came in saying the semifinals was the goal and he did it. Rating: 7.5

Comments below, please, and give us your ratings, won't you?