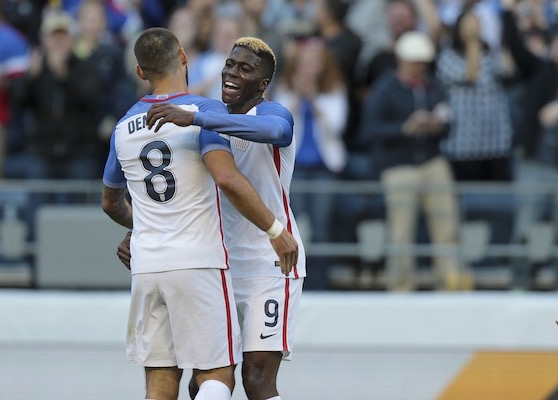 Clint Dempsey scored a first-half goal and created another after the break to lead the U.S. men to a gritty, rousing, inspirational 2-1 win over Ecuador and advance to the Copa America Centenario semifinals.
BY John Godfrey Posted
June 16, 2016
11:40 PM

THE U.S. MEN'S NATIONAL TEAM continued its strong play Thursday night in Seattle, jumping out to a two-goal lead over Ecuador and holding on to win 2-1 to advance to the semifinals of Copa America Centenario.

Clint Dempsey led by example, scoring on a first-half header in front of his home crowd, and then fighting through the Ecuador defense to create a second-half tally for Gyasi Zardes.

The Americans will be without three key contributors—Jermaine Jones, Bobby Wood, and Alejandro Bedoya—when they face the winner of tomorrow's Argentina-Venezuela match on Tuesday night in Houston.

But Jurgen Klinsmann and his men will take it. They beat the No. 13 team in the world in a knockout game, and they did so in impressive fashion.

A rabid—and partisan—crowd at CenturyLink Field in Seattle gave the U.S. men's national team a distinct home-field advantage—never a sure thing in this country.

The first noteworthy attempt on goal came in the sixth minute and off the foot of Ecuador winger Jefferson Montero. Cutting in from the right flank, the Swansea City man curled a dangerous-looking shot from just outside the penalty area but it floated over Brad Guzan's goal and out of play.

Ecuador maintained quite a bit of possession in the early stages of the game, and in the ninth minute Manchester United winger Antonio Valencia dribbled into the box and looked for an opening. The ball ricocheted in front of goal but the U.S. pounced on the rebound and immediately burst into a counterattack that showed promise until Jermaine Jones mishit a cross that squibbed into touch.

Neither side came close to scoring in the opening 15 minutes.

In the 17th minute, however, the Yanks showed a bit of promise. With both teams bunched up in the middle third of the field, Clint Dempsey sent a hopeful pass forward to Bobby Wood, and the Hamburg striker pushed past his marker and stretched to kick the ball toward goal.

It wasn't enough to challenge Ecuador goalkeeper Alexander Dominguez, but it seemed to reveal a vulnerability in the visitors' back line.

Sure enough, Wood made another strong run in the 22nd minute, pinning the Ecuador defense back. He circled right and passed to Jones who hit a first-touch cross to Dempsey. The Seattle Sounders attacker leapt to meet the ball and headed it back across goal to give the Yanks a 1-0 lead.

U.S. supporters had even more reason to shout just five minute later when Michael Bradley floated an inch-perfect, 45-yard free kick to Alejandro Bedoya on the left flank. The Nantes midfielder tapped a pass to Dempsey with his first touch and the Texan delivered a left-footed shot on goal that was on its way to the far corner until Dominguez stretched out to save it.

As the half-hour mark approached, the U.S. was in complete control of the contest.

Ecuador responded with rugged play, and for the latter stages of the first interval a number of Americans—John Brooks and Matt Besler foremost among them—spent time writhing on the pitch, victims of tough tackles.

The U.S. response? Another counterattack. In the 42nd minute Bradley created something out of nothing, floating a long ball in front a charging Dempsey, who sent Bedoya in on goal unmarked. The ball was on Bedoya's weaker left foot, however, and his close-range shot did not ever challenge Dominguez.

An unlikely source—Bradley—nearly gifted Ecuador a goal right before halftime. The U.S. captain had possession in the center of the pitch but his ill-advised backpass was sent into No Man's Land. Ecuador pounced and nearly equalized, but Geoff Cameron came up with a big block on Michael Arroyo's attempt on goal.

It wasn't so long ago that the U.S. men's national team held a 1-0 halftime lead over a South American opponent in a Copa America Centenario match. (You saw the Paraguay game, right?) This time around, however, nobody wearing Stars and Stripes was sent off in the early minutes of the second half.

But Ecuador definitely came out with on its front foot. A pointless Jermaine Jones foul near the corner flag created a dead-ball opportunity for Ecuador. On the ensuing cross, Antonio Valencia nodded the ball to Enner Valencia, who just missed an open chance at point-blank range.

And then things got weird.

Already playing with a yellow card, Antonio Valencia foolishly tripped Bedoya after the ball was out of play. In the scrum that followed, Jones curled his hand into a fist and made contact with Michael Arroyo's jaw. It wasn't much, but the referee saw it clearly and sent off both players.

Ecuador lost its undisputed star. The United States lost one of its inspirational leaders. And for the next 10 minutes or so, both teams played like they were distracted.

Ecuador emerged from its funk before the Yanks, it must be said, and momentum began to shift in favor of the South Americans. At the one-hour mark, Ecuador took control of the midfield and generated a few half-chances. Nothing truly bothered Guzan, but the crowd quieted down quite a bit as the U.S. looked bewildered.

In the 65th minute, Brooks lifted a long ball from the U.S. half behind the Ecuador defense. Like he had been doing all day, Woods chased the ball down and retained possession. He promptly crossed into a dangerous area, and Zardes nodded the ball toward a goal-bound Dempsey.

Dempsey fought past—OK, through—a defender and tapped the ball toward goal. It was heading to the far corner when Zardes emphatically slammed the ball into the back of the net.

United States 2, Ecuador 1. With 25 minutes left to play, the Yanks could practically taste a semifinal showdown against either Lionel Messi and Argentina or an upstart Venezuela team.

But closing out the contest wasn't exactly easy.

With the Yanks visibly tiring—a clear downside to Klinsmann choosing so many of the same starters—Ecuador struck back.

In the 75th minute, Bedoya lost his man just outside the penalty area to Guzan's left. He committed a foul and earned his second yellow of the tournament—meaning he will miss the semifinals—but it also created a great chance for Ecuador.

Sure enough, Michael Arroyo got on the cross and blasted it with his right foot, beating Guzan easily and cutting the U.S. lead in half.

Ecuador responded with even more desperation and aggression, coming close with several potential equalizers. Enner Valencia, for one, will be having nightmares about a certain point-blank opportunity for a long time.

The crowd, boisterous from the opening whistle, sensed the sea change and grew strangely quiet.

But then Klinsmann decided to play cheerleader, waving his arms frantically and exhorting the fans to support the U.S. players.

John Godfrey is the founder and editor in chief of American Soccer Now, and he wants to read your comments on the game.