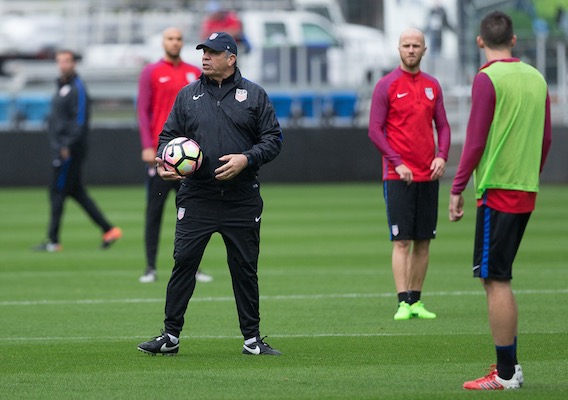 Bruce Arena Says "We'd Like to Be Playing Right Now"

Despite injuries and suspensions that have depleted the team, coach Bruce Arena, iconic goalkeeper Tim Howard, and rising star Christian Pulisict are confident ahead of Friday's match against Honduras.
BY Noah Davis Posted
March 23, 2017
7:55 PM

SAN JOSE, Calif.—The weather was perfect, 64 degrees and sunny, as the United States men's national team walked onto the Avaya Stadium field for its final training session before taking on Honduras in the final round of CONCACAF World Cup qualifying. The Americans, in last place after two matches, face a virtual must-win against the Catrachos on Friday evening.

But rather than panic, the team is projecting an air of calm. The mission, after all, is simple.

"It's soccer," 18-year-old star Christian Pulisic said. "And you have to play hard and try to win the game." He laughed, just a little. He's ready. So is everyone else.

"The mood is we'd like to be playing right now," Bruce Arena, hired after Jurgen Klinsmann's ouster following November's disastrous results, said in a press conference before practice. "The guys are very eager to play."

The head coach admitted that he knows his lineup already, but he'll be without a significant number of his first team. Fabian Johnson and Bobby Wood pulled out with injury. Timothy Chandler and Jermaine Jones are suspended. Jordan Morris hurt his ankle in his last Major League Soccer game and has not joined the full squad for training.

Arena has faith that the 11 on the field tomorrow can get it done.

"It's kind of the next man up," he said, sounding very Bill Belichick-like. "Our team has enough depth and experience to deal."

Later, he added: "I'm eager to see how some of these other players are going to perform. My guess is that we're going to be OK."

The talent is here. But if the Americans fail to earn three points on the West Coast, their road to Russia gets even rockier. While they've had good showings in desperate times before at home—against Honduras in 2009, versus El Salvador in 2010, 2013's SnowClásico—Friday evening's match is a precarious situation against a strong opponent.

"I'm not going to put pressure on myself like that," Pulisic said. "I'm just going to go out, be confident, and play like I play."

This seems smart. Sometimes, the confidence of youth is the best response. (Puslic's recent electric form with Borussia Dortmund certainly helps as well.)

Then there's the veteran core: Tim Howard, DaMarcus Beasley, and Clint Dempsey were here when Arena first coached the United States national team. All three kept their levels high and will play a role against Honduras.

"I marvel at the veteran players who are still here, who I had so many years ago," Arena said, "their desire to be here and the leadership role that they naturally take."

The U.S. needs a mix of old guys and young kids to get three points.

"More so than happy to be here, we're determined," said Howard, the presumed starting goalkeeper. "We know what it takes. We've been through this before. It's a rollercoaster. We're pretty unfazed now because we've seen it all. This will be another great story to tell come October."

It will be, yes—assuming the U.S. makes it to Russia.

On Thursday evening, the weather was beautiful—California at its best.

But things can change quickly. As the Americans warmed up with a jog, their shadows grew longer.