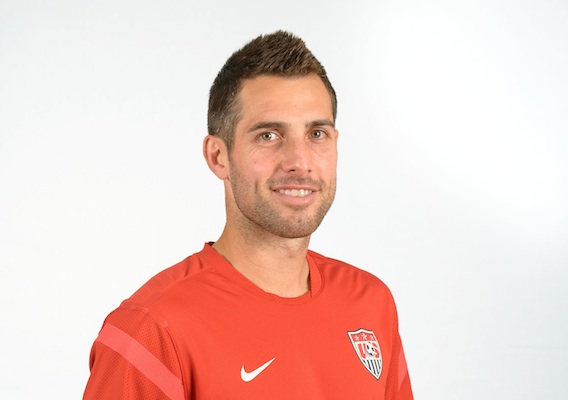 Can Carlos Bocanegra Rehab His Game in MLS?

Carlos Bocanegra is back in MLS, but will he be able to parlay this move into a roster spot on the U.S. national team. We caught up with the former captain to talk about Besler, Gonzalez, Klinsmann, and more.
BY Chris Gigley Posted
July 21, 2013
3:42 PM
FORMER UNITED STATES men's soccer team captain Carlos Bocanegra always said that he'd like to return to MLS one day, and not just for a symbolic farewell tour en route to retirement. He wanted to be a difference maker for whatever team he wound up with. Mission accomplished. After nine years of playing in Europe, Bocanegra returned to MLS with Chivas USA on July 17 and immediately helped the Goats snap a 14-match winless streak in a 1-0 victory over Toronto. The 34-year-old defender tells American Soccer Now he has plenty left in the tank. And not just for Chivas. He's ready if U.S. national team head coach Jurgen Klinsmann comes calling once again. AMERICAN SOCCER NOW: Have you noticed any improvement in the play in MLS compared to when you left in 2004?
CARLOS BOCANEGRA: That's a hard question to answer because I've played only one game. One thing I have seen is the league has grown tremendously and has a lot of nice new stadiums. But I'd be giving you a false answer if gave you my judgment after only one game. It's just nice to be back regardless. ASN: Does it feel strange as a former U.S. captain to be playing for a team with such strong ties to Mexico?
CB: Not at all. I was excited to come back. Obviously, I'm playing in the U.S. again. And I'm from Southern California, so coming to work at the Stub Hub Center every day is pretty amazing. There are some more Spanish speakers in our locker room than there are in other locker rooms, and it definitely has a Latin flair, but it's fine for me. It's not an issue. It's good. It's been nothing but positive. ASN: You didn't play in any of the Hex matches in June or Gold Cup matches in July. Where do you think you stand with the USMNT?
CB: I have a decent dialogue with Jurgen. But coming back to MLS—or wherever I may be playing—I can't be distracted by chasing the national team. I've been fortunate enough to have a pretty long career with the national team. Would I like to get back in there? Of course. But first and foremost, I want to play for this club and help us win. If that translates to a call up to the national team, great. If not, OK. I can't really control that. I enjoy being part of that group, but I have to concentrate on what I'm doing here with Chivas. ASN: Do you think Matt Besler and Omar Gonzalez are ready for the big stage of the World Cup?
CB: They're good enough and will be ready to play. It's just a matter of them getting some games under their belts. Facing top competition at the international level is different from MLS. When you're playing teams like Brazil and Spain, they put you under pressure for the entire game. You can't let your guard down. These are the little things those guys will start to see when they're playing for the national team. But they certainly have the talent. Those are two good young players. I think they're still learning on their feet. I think they'll keep getting better and better. ASN: How long does it take to get comfortable at the international level?
CB: It takes a little bit of time. It's part of a natural evolution that happens all the time on the national team. Players get older and step down and new players come in. It's also hard playing with the national team because you're not with the guys day in and day out. You have to come together as a team and gel quickly. That's the challenge. But like I said, once these guys get some games under their belts, they'll gain more confidence. The good thing about Jurgen is he's really positive and encouraging. He wants guys to go out there and express themselves and play their game. ASN: Klinsmann lives in Orange County. Did that influence your decision to play in L.A.?
CB: It wasn't up to me. The whole allocation process with MLS is what determined this situation. It ended up working out like this, and I'm glad Chivas stepped up to bring me in. It's a great fit for me. ASN: What are your early impressions of the Goats?
CB: Here's what I've seen. A group of younger players with few vets mixed in—but not too many. Everyone on this team is willing to work hard and has a great spirit. We have coaches who are really trying to teach and help the guys learn and tactically get us settled so we can build defensively. There have been a lot of sessions where we're learning to come together as a team. The head coach has been great. He's a nice guy. Out on the field, he has a good way about him. All those things are really good. I'm happy to come in here. I know it will be a challenge to put better results on board, but we're building on it already. We're just trying to build little by little and not get ahead of ourselves too much. The win over Toronto showed some good character. It was really good for me to see that. What do you think of Bocanegra's return to MLS? Think he has a shot with the national team? Check out our ASN Matrix to express your views.