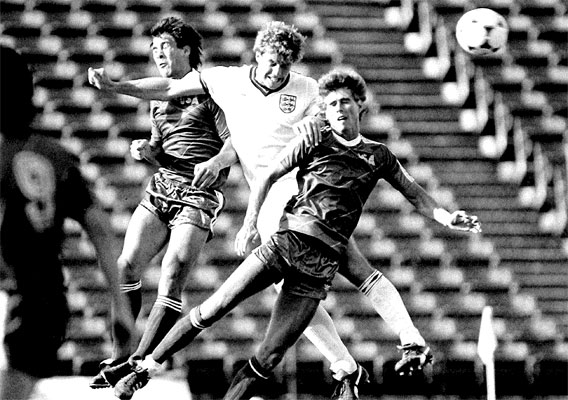 American Soccer in 1985: The Nightmare Approaches

The United States has qualified for every World Cup since 1990, but it struggled mightily before this run. Will Parchman's three-part series explores America's ill-fated 1985 journey toward qualification.
BY Will Parchman Posted
February 11, 2013
11:00 AM
Editor's Note: This is the second installment in a three-part series. You can read the first part here; the final installment will run on Feb. 18.

THE U.S. NATIONAL TEAM that convened for its final qualifying push in 1985 was a prismatic bunch led from the sidelines by a charismatic general. The Starting XI that took the field on May 31 was young and internationally inexperienced: Arnie Mausser in goal; Gregg Thompson, Dan Canter, Kevin Crow, and Mike Windischmann in defense; Paul Caligiuri, Perry Van Der Beck, Rick Davis, and Mike Fox in midfield; and John Kerr and Hugo Perez up top. Kerr (Duke), Caligiuri (UCLA) and Windischmann (Adelphi) were still in college. Fox, Crow, and Thompson had only just left school in 1982, while Davis and Mausser, who started 12 games as Team America's keeper, were among the few veterans of the bunch. The roster was long on determined defenders and brusque midfielders, but U.S. coach Alketas Panagoulias sorely lacked attacking panache. He felt this too when he brought together Team America for its first training camp in 1983. Cosmos striker Steve Moyers, who was tabbed as the U.S.'s next hope at forward, left the Team America camp after just two weeks, favoring instead the Cosmos. He never came back. Finding a consistent, effective goal-scorer dogged Panagoulias to the end. In 1985, the U.S. soccer team scored just six goals in eight games. All six goals came from different players. But nothing could tamp down Panagoulias' relentless optimism. It helped that, in 1983, he was given charge over the U.S. national team, the U.S. Olympic team, the NASL's Team America, and the national youth team for good measure. Nobody knew the player pool better than Panagoulias—perhaps no one coach in U.S. soccer history has enjoyed such oversight—and nobody saw the country's soccer potential in more lavish terms. In a 1983 Sports Illustrated interview, Panagoulias couldn't contain this overflow of positive sentiment that echoes in Jurgen Klinsmann's speeches today. "This isn't some underdeveloped, underprivileged country," Panagoulias said. "Even now as we talk, somewhere—in Harlem, in Tampa, in L.A., I don't know where—there are Peles growing up. There was no compulsion for me to leave a comfortable career in Greece and come here. But I believe that American soccer has a tremendous potential for success." Panagoulias' eccentricity was legend. The former Greek national team coach, who died in 2012, was famously blunt and often laced his speech with profanity. A statuesque and occasionally intimidating man, he once complained to reporter Donn Risolo about "all these goddamn California surfers" on his roster, and he frequently worked with a smoldering cigar clamped between his teeth. He had an encyclopedic knowledge of U.S. history (he'd been a U.S. citizen for about 15 years by this time), and he loved to stump his players with obscure trivia on state capitals and the founding fathers on road trips. His players were often treated to his quicksilver mind. Before one training camp during the build-up to the 1984 Olympics, Panagoulias released his roster for a pre-game meal and told them to order whatever they wanted. He assumed, like professionals did overseas, the players would load up on starches and lean carbohydrates. Panagoulias arrived at the table just in time to see the waiter bring out a serving tray of, among other greasy food, nachos and fajitas. He launched into a meandering, profanity-laden tirade on professionalism and refused the food. And then there was the female USA Today reporter who routinely showed up to practices with a recorder but without much soccer knowledge. Panagoulias hated her. The players generally took her arrival as a sign to clear off. A brutal, occasionally sexist tirade on the value of knowing soccer terminology and tactics was sure to follow. He was blunt to a fault. But he was also passionate about drumming up support for his players, and he crusaded for the necessity of a thriving U.S. national team. At a time when most U.S. officials had their scopes adjusted to salvaging something from the NASL, Panagoulias foresaw a top-down module beginning with the national team and trickling down to the national club league—not the other way around. Given the rift between this thought process and the pervasive one at the time, this wasn't an easy sell. The federation was insolvent (Panagoulias was just the second full-time coach in the history of the U.S. national team), so he used the NASL and Team America to circumvent the lack of resources. It wasn't perfect, but it was the sum of his resources.

DESPITE THE DISTRACTIONS, the U.S. men appeared on pace to qualify for Mexico. A relatively breezy two-game sweep over the Netherlands Antilles in 1984 (a 0-0 draw away followed by a 4-0 exclamation point at home) set the national team up with two games on home soil against Trinidad & Tobago.

The U.S. came back from 1-0 down in the first leg in St. Louis with goals from Borja and a dramatic 88th-minute winner from Mark Petersen for a 2-1 result. Caligiuri's 15th-minute tally during the second leg in Torrance on May 19 just four days later secured the series. That sent the U.S. to a two-legged tie with Costa Rica with three wins and a draw in its qualifying wake. For many of the players, this augured something distinctly positive. "This is something that we'd never experienced before at the World Cup level," Davis said. "You've got this heightened sense of, 'This is going to be the time, this is going to be the year, and 1986 World Cup, here we come.'" But they couldn't escape the clawing gravitational pull created by the NASL's supernova. The league's last game was played on Oct. 3, 1984, and most of its players weren't waiting for its unlikely restructure. This triggered an exodus to the Major Indoor Soccer League, which replaced the NASL as the U.S.'s top professional club league of record (until it folded in 1992). By the time 1985 arrived, Thompson, Mausser, Crow, Canter, Van Der Beck, Davis, Fox, and Perez all played in the MISL during the fall, winter and early spring. The only three starters who weren't in that league yet—Kerr, Caligiuri and Windischmann—were still in college. It is important to note the obvious differences in style required to play indoor. The field is roughly the size of a hockey rink, the game lasts 60 minutes, teams can only employ six players, the boards are in play, and there is no offside rule. It was easy enough for most players to adjust their scopes to the rules themselves, but playing on a downsized pitch for 30 fewer minutes per game often had a degenerative effect on conditioning. And, in any case, having to switch between indoor and outdoor styles so quickly was anything but ideal. "Different game, totally different game," says Van Der Beck, now the executive vice president of the Tampa Bay Rowdies. "There were some players who played indoor and had some very lucrative careers that were going back and forth. But to play internationally when you're playing a full season of indoor soccer, you just need more time to prepare. It's just the way things were. You just had to deal with it." FIFA had not yet instituted anything so sophisticated as an international match calendar or official release days. This left it to each individual federation to schedule games within their own means. For a country without a professional outdoor club league, the lack of regulation to even the playing field forced the U.S. to play its final four qualifying matches at the semifinal stage in the span of 16 days. To top it off, the U.S. soccer federation's insolvency it to employ whatever tactics necessary to rake in money. Chuck Blazer was then the chairman of the International Games Committee, so the ultimate decision fell on his desk. In this case, that meant marketing the game to the group of fans most likely to turn up in numbers for tickets. Unsurprisingly, this was the Costa Ricans, not the Americans. The U.S.'s 1-1 result in Alajuelense, Costa Rica, just days earlier left the Americans in need of only a draw to advance to the final round with Canada and Honduras. Profit, though, dictated that the U.S. would be forced to play in front of a decidedly pro-Costa Rican crowd for the second time in a week. The majority of the 11,800 jammed into Murdock Stadium on the campus of El Camino College in Torrance were flying Costa Rican flags. And this is where the nightmare of May 31, 1985 began. NEXT MONDAY: PART THREE—THE MATCH