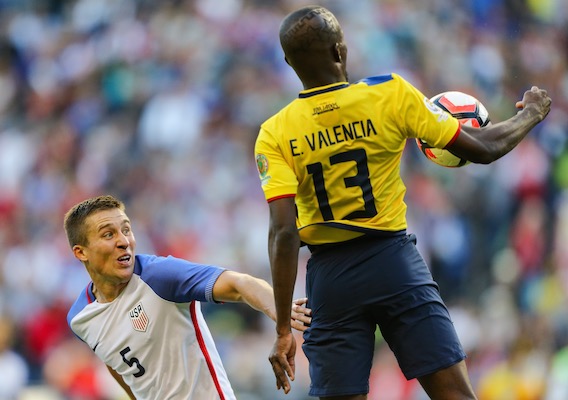 5 Thoughts on the Yanks' Massive Win Over Ecuador

Matt Besler stepped up big-time, Gyasi Zardes added to his highlight reel of strong efforts, and who in the world is going to start in the semifinal match next week? Brian Sciaretta assesses the situation.
BY Brian Sciaretta Posted
June 17, 2016
2:05 AM

THE U.S. MEN'S NATIONAL TEAM does not get many opportunities to play in big-time knockout games but on Thursday night, it seized the day to fend off Ecuador 2-1 and book a ticket to the semifinals of Copa America Centenario.

There is a lot to digest from this win, as it wasn’t pretty but it was extremely admirable. Now in the semifinals, this qualifies as one of the best-ever achievements on home soil for the U.S. men. For the first time in years, positive energy is flowing from the team and the players look like they are having fun. It that regard, the tournament has been the right event at the right time.

“Sometimes you win games on emotion”

This quote, from the great Jose Mourinho, was uttered with games like Thursday's quarterfinal in mind. In a 10v10 situation against a speedy and talented Ecuador team, the U.S. players had to fight the fatigue that comes from having a nearly unchanged starting lineup through four games.

It was not pretty and it was not proactive soccer. Klinsmann said that he wanted the U.S. to take the game to the opponent. That happened—a little—early on, but it evaporated as the game progressed.

In its place we saw clinical finishing and a gutsy effort from players who found that extra little bit of energy despite running on fumes. In early 2015, fitness was a big talking point from Klinsmann and the fitness from the U.S. players was a difference-maker against Ecuador.

The Yanks wanted this game and the players did whatever they had to do to make it happen. It was a typically hard-fought American performance.

Brooks and Cameron can cover up a lot

Like the group stage game against Paraguay, this win over Ecuador was far from perfect. Fortunately for the U.S., the team doesn’t have to be perfect because it has two central defenders who are in top form at the moment.

John Brooks is perhaps the best defender so far at Copa America Centenario and Geoff Cameron is also having a great tournament. They complement each other very well and win so many challenges in the box that it leaves opponents with few chances to score.

For all the possession Ecuador had late in the game, Guzan did not have to make that many high-quality saves. Of course the U.S. got a little lucky when Ecuador missed a chance or two, but the Ecuadorian players did not have nearly the amount of chances a team with their possession should have. A big reason for that was Brooks and Cameron.

Moving forward in the World Cup cycle, a Brooks and Cameron pairing should have American fans feeling very good about the team's ability to play with some high-quality teams.

Besler was the unsung hero

Much of the post-game talk will center on Clint Dempsey’s performance, and rightly so as he registered a goal and an assist. John Brooks' name will spark conversations, too, as his partnership with Geoff Cameron shined in central defense. Bobby Wood and Gyasi Zardes both gave strong, confident performances.

The unsung hero, however, is Matt Besler. With DeAndre Yedlin suspended, the Sporting Kansas City central defender was thrown into the left back position despite only having played the role once (in a four-man backline) against a poor Bolivian team three weeks ago. Now he had to do it against a talented Ecuador team in a Copa America knockout game in front of more than 50,000 people.

He rose to the occasion and even had an important cross on the second goal. It was a clutch performance and one that underscores Besler's soccer smarts. He reads the game well and has a good mind for the sport. That really allowed him to fit into the position well with no real learning curve.

Besler’s outing also gives Klinsmann some realistic options for the semifinal. He can keep Besler at left back and then maybe put Yedlin at right back to give Fabian Johnson the chance in the depleted midfield. Or he can keep the backline as it is with Yedlin on the bench.

Left back has been an Achilles' heel for the U.S. men's national team and while Johnson can play there, everyone knows he is underutilized at the position since he plays in an attacking midfield role for a Champions League-caliber Borussia Monchengladbach club.

Klinsmann has done a lot of experimenting in using players out of position but maybe this is one to worth the effort?

Many soccer fans have seen the YouTube video an American fan made last week—a compilation of Gyasi Zardes’ first touches. It's quite unflattering. But to be fair, Zardes' first touch has cost the U.S. some a number of scoring chances.

That said, Zardes is finding ways to be effective despite his limitations. He does have a knack for getting into dangerous positions and making big plays. Against Paraguay he had the big assist. Thursday night against Ecuador he scored a goal on a play where he also won an important header. Late in games he makes runs that can open up the field. He also then can track back on defense and either force turnovers or close down passing lanes.

Zardes might never be the highly technical player that American fans want and he might eventually lose his starting spot to young stars like Christian Pulisic (and others who are rising through the ranks) but Zardes can play an important role on this team. He’s scrappy, he can cover an incredible amount of ground and not lose his pace late into games, and he seems to rise to the occasion as the games get bigger.

Starting XI for the Semifinal?

For the semifinal on Tuesday in Houston—where the U.S. will face either Argentina or Venezuela—the U.S. will be without Jermaine Jones, Alejandro Bedoya, and Bobby Wood. That is going to hurt but since the U.S. team had 10 players staring all four games, suspensions were bound to happen. There was no way of escaping it.

Now Klinsmann will be required to test the team’s depth. Fortunately, some fresh legs might be just what's needed at this stage of the competition. In particular, Bedoya looked very fatigued in the second half.

So what is likely to happen? Without Wood, it is quite possible that Klinsmann opts for a 4-4-2 lineup with Zardes and Dempsey up top.

In the midfield, Bradley will be paired centrally with either Kyle Beckerman or Darlington Nagbe. Beckerman has been useful late in games for defense but does he have the ability to deliver a complete 90-minute performance against a top team? Also, is Klinsmann willing to give Nagbe a shot in a huge match next week?

Elsewhere in the midfield, it seems likely that Graham Zusi is a straight swap for Bedoya. But on the other side, does Christian Pulisic come in? Or does Johnson move into the midfield with Yedlin at right back and Besler at left back? One final option is to start Chris Wondolowski with Dempsey up top with Zardes back in the midfield.

There is a lot to figure out in the days ahead.