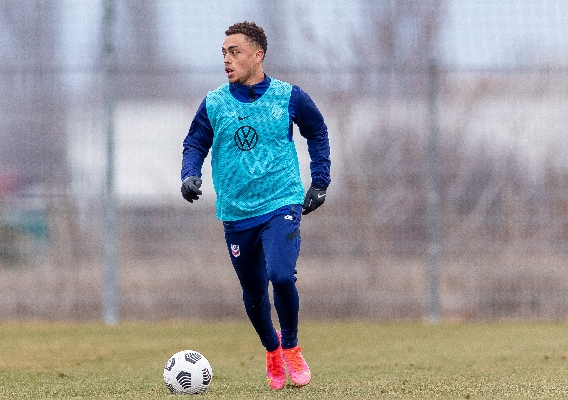 Sergino Dest arrived at USMNT camp on the heels of a career milestone performance at Barcelona. Even still shy of his 21st birthday and with just five national team caps, Dest is a veteran leader on this current group. ASN's Brian Sciaretta wrote about Dests rise since his national team decision 18 months ago and during his 2020/21 season with Barcelona
BY Brian Sciaretta Posted
March 23, 2021
4:05 PM

WHILE HE HAS just five caps for the U.S. national team and is still only 20, Sergino Dest carries himself like a veteran on the team. For one, he has started in the Champions League with two different teams – Ajax and now the mighty Barcelona and also has vast youth national team experience playing in both the U-17 and U-20 World Cups. Most of all, however, the player pool has expanded greatly in the 18th months since he publicly declared that he would represent the United States over his native Holland.

Now in Austria ahead of the U.S. team’s upcoming friendlies against Jamaica and Northern Ireland, Dest is surrounded by players who were not part of the team in the fall of 2019. Christian Cappis, Brenden Aaronson, Owen Otasowie, Yunus Musah, Daryl Dike, Nicholas Gioacchini, Gio Reyna, Jordan Siebatcheu, Chituru Odunz, Bryan Reynolds, and Chris Richards are all new to the pool since that day. Two other players in Luca de la Torre and Erik Palmer Brown had limited caps under interim manager Dave Sarachan but were never part of the regular rotation.

Those players consist of half the current roster that is new since Dest declared. For some of them, joining the pool took dual national recruiting of their own. Siebatcheu once represented France’s U-21 team and Dike’s brother and sister played for Nigeria. Musah, 18, however was a high profile “recruit” who has earned attention for his first team performances at Valencia and his time playing for English youth national teams.

For Dest, the best part of his commitment is that nothing really changed. The team was just as welcoming before he committed as it was afterward. Considering the new players, especially Musah, Dest believes that will help him.

“Everybody feels welcome,” Dest explained. “For [Musah], even before he committed to the U.S. team, he was welcome. It's just a good vibe. For me, personally, when I committed to the United States, it was actually the same as before. Obviously, people were happy that I chose the U.S., but there always has been a good vibe - that's really good for the new players also, it's one group, one nation.”

Like any veteran, however, Dest is going to have to provide leadership and fortunately for the fullback, he arrives in this camp playing some of the best soccer of his young career. On Sunday, he scored two goals for Barcelona in a 6-1 rout over Real Sociedad to help the team remain just four points back of leaders Atletico Mardid. 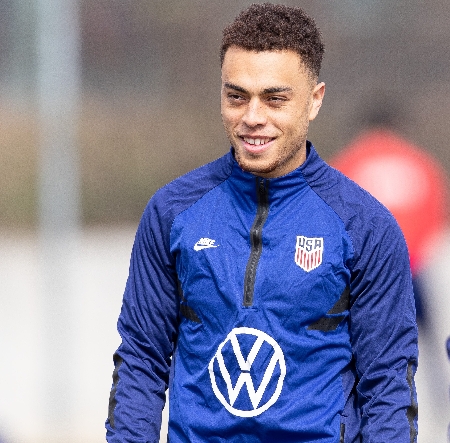 “I was really, really happy to score two goals in a game,” Dest said. “I think I needed it. It was about to come. I hit the cross bar and then I hit the post against Sevilla. It finally came. I was really happy because it was important for the team. It was the second and third goals and I think as a team, we put out a really good result. We have to continue it.”

Last August, Dest made the historical transfer from Ajax to Barcelona and became the first American to play for the storied club’s first team. Barcelona is also in a transitional period as it has moved on from its iconic core and Lionel Messi is perhaps in his final year with the club. Dest was signed as one of the players who could comprise of the next core.

This season has been mostly positive for Dest but it is not without its struggles. One such period came in the Champions League during its Round of 16 first leg loss to Paris St. Germain. In the 4-1 defeat at home on February 17,  Dest not only struggled to contain Kylian Mbappe but he also was unable to get into dangerous positions – having just one touch in the final third.

Shortly after that loss, Barcelona manager Ronald Koeman made key formational change where he went with a three-man central defender lineup with two wingbacks pushing further up. With Dest playing wingback, he was given more freedom to push into the attack.

“I think this system fits the whole team really well - especially for me,” Dest explained. “I think it's a little bit better because I have someone behind me and I like to take some risks in my game. If I get to take risks in the game, I am at my best.. of course, it can go wrong but now I have someone behind me and that is really, really good for me. As a team, the system really fits the whole team. We are winning and scoring a lot of goals.”

“In the new system, [Koeman] just said to me if you can, just go – go,” he added. “That's something that fits me really well. My attacking abilities are my strengths. I feel like I can take more risks..I feel like I can grow more in this positions and be more helpful to the team.” 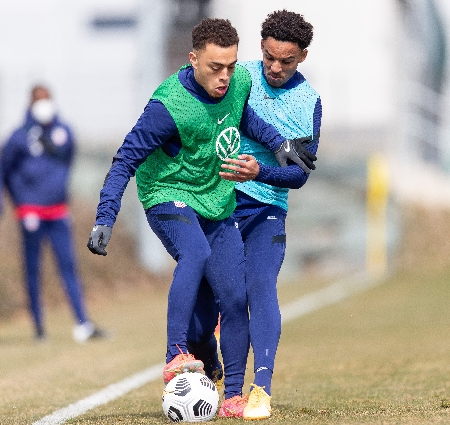 Since that first-leg loss to PSG, Barcelona has not lost. Over its last eight games including six in La Liga, the return leg against PSG, and one in the Copa del Rey, Barcelona has won six and drawn two. It has outscored its opponents 24-4 including scoring 10 goals in its last two La Liga games.

With World Cup qualifying and Barcelona finding its groove, Dest believes he has matured a lot as person and as a player. On the field, he has learned to accept roles while also improving on his decision making on the field – something that will help him with the national team as well. Off the field, the expectations at Barcelona are on another level when compared with Ajax or just about any other club in the world. While he has had his down moments at Barcelona this season, learning how to rebound under that spotlight has made his stronger.

“Obviously there is pressure playing for such a big club like Barcelona,” he continued. “For me, the pressure doesn't affect me a lot. I just try to play my own game. Of course, you have some bad games but if you're looking through social media, that is going to make it bad. It's not good for your mental recovery after a good or bad game.  I just play. If I have a bad game, it's on to the next game. I don't focus on the media, that can break some people.”

“I am at the right place to hit my full potential.”