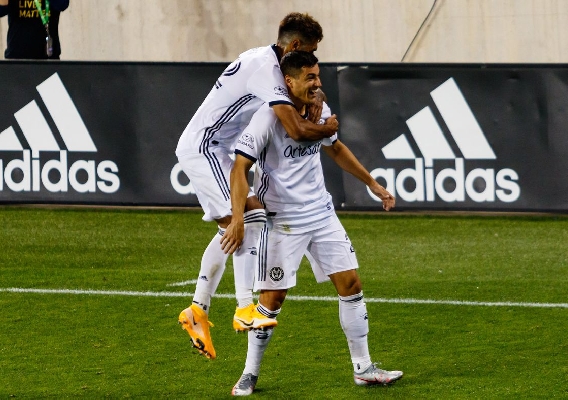 ASN's Brian Sciaretta writes about the solid youth numbers in MLS over the weekend as young players both got on the field and played well. He also looks at the new faces who have used the 2020 season to breakout into regular contributors for their clubs.
BY Brian Sciaretta Posted
September 21, 2020
6:00 PM

THIS PAST WEEKEND was another huge step forward in MLS in terms of the important area of getting young players on the field. If we are being honest, things have been quite positive in this area since the MLS is Back tournament began in July.

Measuring things with the start of the 1997 birth year (2020/21 Olympic eligible), there has generally been an impressive number of domestic players in this age-rage to play.

Even going down to the 2003- birth year (2023 U-20 eligible) there has been minutes given to players such as San Jose’s Cade Cowell, DC United’s Kevin Paredes, and the FC Dallas duo of Dante Sealy and Ricardo Pepi. Over the weekend, 2004-born Christian Torres made a late cameo for LAFC – his third appearance of the season.

Young players – particularly homegrowns – are doing very, very well. When you combine that with the fact that many players out of MLS academies are succeeding in Europe and with the fact that two of the most youth-friendly teams the league (Dallas and Philadelphia) are winning, it all bodes well.

The Philadelphia Union stole the show in this regard during its 4-1 win over Montreal. Brenden Aaronson, Matt Real, and Mark McKenzie all notched assists. Anthony Fontana scored one of the goal – his third over the past two games.

Philadelphia Union kids are putting on an impressive show tonight. Here is Mark McKenzie to Brenden Aaronson to set up Przybylko pic.twitter.com/7njrxX2rHZ

But this has been the case for awhile now. Jim Curtin’s team is in second place and the young players have been key all season.

Aaronson is, of course, being linked with a coming move to Red Bull Salzburg. ASN has heard the same thing and Kirsten Dyer at MSG reported last night the deal could be coming soon. But ASN is hearing that such a deal could include Philadelphia keeping a percentage and that Aaronson might remain with the Union via a loan through the end of the season.

With that said, Philadelphia needs to put forth an effort to win it all this season. Assuming Aaronson is shipped out and McKenzie potentially not far behind, there will be a readjustment next season.

Cole Bassett is coming on strong for Colorado as the attacking midfielder scored in the club’s 2-0 win over the LA Galaxy (which also saw Bassett’s U-20 teammate Julian Araujo sent off for the Galaxy). Bassett is on a roll for Colorado and now has three goals and three assists in eight games in 2020.

Among forwards, U.S. U-23 candidates Toronto’s Ayo Akinola and Portland’s Jeremy Ebobisse both got on the board for their respective clubs. At this point, both players have the inside track to making the U.S. U-23 team.

The 20-year old heads it in off the feed from Pablo Piatti to give @TorontoFC a 2-1 advantage. #DCvTOR pic.twitter.com/91xvcDMnWJ

It is one thing to play young players but it is another thing to win with young players – while having the young players play key roles in the process. The two best clubs in that regard – Philadelphia and FC Dallas – are both pushing towards the top with FC Dallas sitting in third in the West and Philadelphia sitting second in the East. That would be a very fun MLS Cup.

While players like McKenzie, Aaronson, and Ebobisse are all building off of solid 2019 seasons and aren’t new to this scene, the 2020 season has also seen young players make the transition into becoming important players.

For FC Dallas, U.S. U-20 midfielder Tanner Tessmann has proved why the club pursued him so intensely. Bryan Reynolds has also looked like an potentially strong replacement for the now-sold Reggie Cannon.

For Orlando City, Daryl Dike, 20, is the reigning MLS player of the month and the Orlando City forward is helping turn that team into a contender in the Eastern conference.

For Portland, Eryk Williamson has been regularly solid and he has shown that he probably should have been playing regularly the previous two seasons.

And here is Delaware’s own Anthony Fontana with his 3rd goal in his last 2 games for Philly pic.twitter.com/EoaQBsot3k

For Philadelphia, Matthew Real has been known among youth national team circles for awhile but he’s now playing like he’s a starter-quality. Anthony Fontana, meanwhile, is doing very well in the minutes he’s been given

So anyway... this pass from Real is impressive pic.twitter.com/eNyBWHeAVO

Overall, it’s been a huge step forward in MLS this season and the progress of young players in this league is critical to the future of American soccer. There will always be some stars who move abroad at a very young age, like Christian Pulisic, but more and more the league can serve as a way to foster the development of players and be an important part of the process that helps create top players.