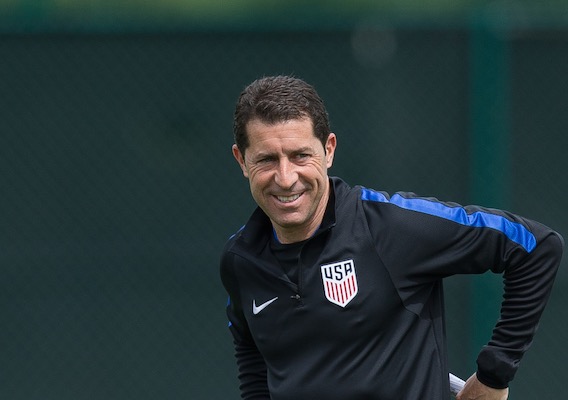 THE UNITED STATES under-20 national team defeated Japan 2-1 on Sunday night to complete a perfect three-game run through the NTC Invitational en route to winning the title. While lifting the trophy means little, the tournament was a success in that several players made strong cases to be part of the team’s future.

The game started poorly for the U.S. as Japan scored the opening goal in the 6th minute when Ritsu Doan took a pass about 30 yards out from goal. The Gamba Osaka midfielder dribbled with ease through the defense and beat U.S. goalkeeper Jonathan Klinsmann.

Fifteen minutes later the U.S. drew even when defender Miles Robinson hit a beautiful looping pass over the Japanese defense that found forward Jeremy Ebobisse. The Duke University product held off his defender near the end line and passed back to Sebastian Saucedo who was running into the box. Saucedo made no mistake with the finish as his low left-footed shot, beating Japanese keeper Rui Yamaguchi to even the score at 1-1.

The U.S. took the l in the 51st minute when Japanese midfielder Keita Endo tried to maneuver the ball in his own half but was dispossessed by U.S. captain Eryk Williamson. The Yank quickly swung the ball out wide on the left side to Isaiah Young. The New Jersey native made a move past a defender and then sent a low cross to Ebobisse, who finished from close range.

For the remainder of the game, Japan stepped up and held the majority of the possession but the U.S. was able to preserve the win.

Next up for the U.S. U-20 team will be a camp in the New York Area starting at the end of July, where the team will face the New York Cosmos and the Red Bulls II.

Players who Made an Impression

Jeremey Ebobisse: The Duke University forward was the player of the tournament, registering three goals and two assists in three games. While big and strong, he showed some technically strong moments. Against Costa Rica, his hold-up play and assist on Saucedo’s goal was very well executed. His three goals were all tap-ins, but he demonstrated the ability to get into dangerous positions. He will have some decisions to make in the near future about whether or not to return to Duke after taking the spring semester off. It would not be surprising to see him continue to trial abroad.

Sebastian Saucedo: The Real Salt Lake midfielder is currently on loan to Liga MX side Veracruz. He showed very well and was the most dynamic American player in the midfield. He finished with two goals and an assist but was also a key part of the build-up to other key scoring chances. It is very likely that Saucedo will be a starter for this team as it builds towards World Cup qualifying.

Luca De la Torre: The Fulham midfielder did not play in the finale against Japan so that he could return to his club. When he was on the field, he was terrific and his assist to Isaiah Young against Panama was one of the best plays of the tournament. He is one of the top U-20 players to watch as he might push for first-team minutes in the English Championship.

Eryk Williamson: The University of Maryland midfielder was named the captain of the U.S. team for this tournament and while he was not involved consistently in the attack, he was effective in a deep-lying position where he helped in the transition from defense to offense. He helped do a lot of the dirty work that broke up the opponents’ opportunities.

Jackson Yueill: The UCLA midfielder showed a willingness to look for through-balls and other ways to play forwards and wings into dangerous positions. Like Ebobisse, he is making noise about leaving college to turn professional. That is probably a smart move as the U.S. U-20 team has become increasingly difficult to make as a college player. For Yueill, he recently went on a trial in Sweden with top-flight club Jönköpings Södra. Minnesota also might be an option as it prepares to make the jump into MLS. Whether Sweden, MLS, or someplace else, he just needs to play.

Here is Yueill’s outstanding pass that played Brandon Vazquez into the box who then set up Coy Craft for the goal in the U.S. team’s 4-0 win over Panama.

Marlon Fossey: A right back with Fulham’s U-18 and U-21 teams, it was Fossey’s first call-up to the U-20 team. The dual-national was born in Hollywood but raised in Jersey, a Crown Dependency in the Channel Islands, and has very little history with U.S. youth national teams. His first U.S. call-up came this spring when he was part of the U.S. U-19 team that won the Slovakia Cup. Now, after winning the NTC Invitational, Fossey has titles in each of his youth call-ups. His play at the NTC up and down, and he made some turnovers against Japan. But it is important to consider that the 17-year-old was the youngest player on the U.S. roster. He is also completely unfamiliar with each of his teammates—except for De La Torre who also plays at Fulham—and is also still learning the U.S. setup. Given all of that, there were enough strong moments to indicate he should be able to grow into a role with this team.