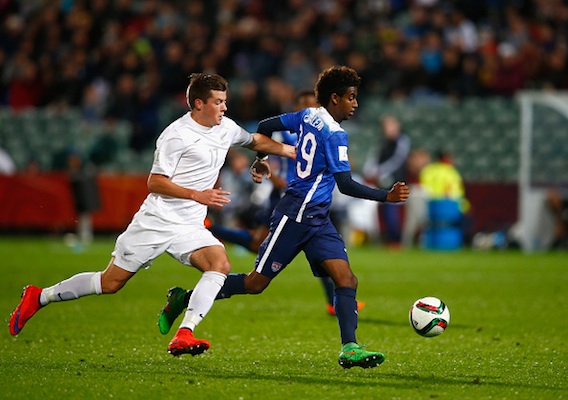 Strong performances from Rubio Rubin, Emerson Hyndman, Gedion Zelalem, and Cameron Carter-Vickers led the U.S. past host nation New Zealand and into the U-20 World Cup Round of 16.
BY John Godfrey Posted
June 02, 2015
8:15 AM

Had we all overrated this group? Did these young Yanks have enough time together to develop chemistry? Would this U-20 team crash out of the Group Stage like so many others before it?

Tuesday's decisive 4-0 win over host nation New Zealand put those concerns to rest as the Americans advanced to the knockout stage of the tournament and now sit atop Group A with six points after two games. Rubio Rubin opened and closed the scoring, while Emerson Hyndman and Paul Arriola added tallies for the U.S.

Neither of Rubin's goals were highlight reel material, but his relentless work rate and strong technical play are lovely to behold. His first strike came in the sixth minute, an entirely unnecessary tap-in of a Bradford Jamieson shot that was bouncing toward the back of the net. (Jamieson celebrated like it was his goal to claim, but match officials ruled otherwise.)

Rubin's second came at the 83rd minute mark, after the match had been decided, when a series of defensive gaffes by the All Whites gifted the Oregon native with a freebie in front of net.

Rubin's enterprising play also created Hyndman's 34th-minute goal, the second of the tournament for the Fulham midfielder. Rubin seems utterly unwilling to give up on any ball, and after outfighting a New Zealand defender for a 50-50 ball, Rubin flicked a shot on goal. Goalkeeper Oliver Sail pushed the shot away but it fell to a streaking Hyndman who, for the second game in a row, ran onto a free ball in front of goal and calmly slotted it into the back of the net.

Paul Arriola's strike in the 58th minute was a beauty, a perfectly placed right-footed blast that ricocheted off the far post and then edged over the goal line. But it was Zelalem's build-up play and eventual assist that made the sequence truly memorable.

Though surrounded by four—or was it five?—defenders, Zelalem nonchalantly danced his way through the heart of New Zealand's defense and then delicately placed a perfect pass in the perfect spot to give Arriola a chance to shine.

Although the Arsenal reserve came off the bench in the first match of the tournament, expect him to be a fixture in Ramos' Starting XI going forward. Zelalem's vision and skill on the ball were nothing short of spectacular, and together with Hyndman the U.S. now has two impressive central midfielders it can rely on to create and distribute.

All told there are eight players on this U.S. U-20 squad in the latest ASN 100 ranking of the top American players in the world, and 17-year-old Carter-Vickers validated his spot on the list with a dominating display at both ends of the field. Solidly built and blessed with an eye for danger, he is a rock in central defense. Carter-Vickers also contributed in the attack, narrowly missing a first-half goal when his header hit the crossbar. He also delivered two shots on goal.

While the pair of wins are encouraging, Sunil Gulati shouldn't start planning parade routes just yet. Myanmar was a technical-but-undersized opponent that punched above its weight and New Zealand looked like a U.S. side from 15 years ago—big and athletic and very committed....but not very good. Stiffer challenges await Ramos' men.

With its place in the knockout round now secured, however, Ramos has the luxury of resting a few players for Friday's final group stage contest against Ukraine (3am ET, Fox Sports 1), which defeated Myanmar 6-0.