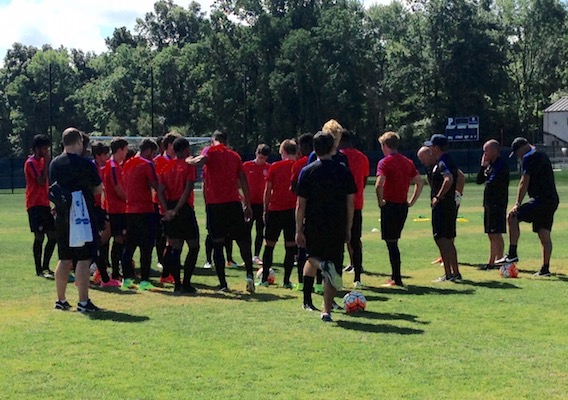 United States under-20 men's coach Tab Ramos is in New Jersey with 20 of the top young players in America. ASN's Brian Sciaretta spoke with the coach and a few key players about the status of the team.
BY Brian Sciaretta Posted
August 05, 2016
8:30 AM

BASKING RIDGE, N.J.—For the United States U-20 team, this is an important time in the cycle as head coach Tab Ramos begins building the team that will compete next February for U-20 World Cup qualifying in Costa Rica.

The current camp is assembled in New Jersey and for Ramos it is a special experience since it is the first time he has been able to bring the U-20 team to his home state—where he was a dominant youth player for the storied St. Benedict’s Prep program in Newark.

This is the third cycle for Ramos as coach of the team and it has been far different than previous cycles. For one, U.S. Soccer now has a U-19 team that allows for great exploration of the talent pool. Also, there is a growing migration of key players of this age group to Europe which, while likely beneficial for the players' development, will complicate matters for Ramos as he tries to obtain their release for qualification next year.

On Wednesday, the U.S. U-20s defeated the New York Cosmos 2-0 with a pair of second-half goals from Indiana University’s Jeremiah Gutjahr and Queretaro’s Jonathan Suarez.

Ramos was satisfied with the team’s effort: “It was a very good game. We played well.” He also added that several of the players who were with the team for the first time adjusted well—citing specifically Gutjahr and Kendall SC’s Jonathan Lewis as particular standouts.

When evaluating his current crop of players, Ramos sees very tough choices ahead.

“I think we have quite a few guys, especially on the attacking side, who are making it hard for us to decide,” Ramos said. “At qualifying, we're not going to have everyone anyway, so it's nice to have options.”

When combining the U.S. U-20 and U-19 teams this summer, there have been solid moments. The U.S. U-20 team won the NTC Invitational in July while the U.S. U-19 team, which is coached by former U.S. national team goalkeeper Brad Friedel, won the Slovakia Cup in April.  Just last week, the U-19 team played in the COTIF Tournament and while it did not advance out of group play, it still defeated host country Spain.

In a cycle when Ramos is unlikely to get access to many of his top players, the U-19 team has served as a valuable asset, enabling the coach to develop a deeper understanding of more players.

“It's helped a lot," Ramos said. "Brad has done a great job with that team. We've had to have perfect communication so that we're not calling in the same players at the same time. We've had a good understanding of who goes where. There's quite a few players who went to Valencia with Brad who could have been here with us—and probably should have been at this camp but that was a good experience for them. It's our first go-around with the U-19s but I think we're seeing the benefits of it.”

The current team in New Jersey is mostly a collegiate team with 12 of the 20 players now at the NCAA level. Despite not playing professionally, several of the collegiate players have shown well and look set to make the transition.

One college player who is not at this camp is Duke University’s Jeremy Ebobisse, who has emerged as the team’s top center forward. After three goals and two assists at the NTC tournament, Ebobisse, 19, is now on trial with Sonderjyske in Denmark.

According to Ramos, Ebobisse is not an unusual case as he predicts that this will be a transitional period for many of these players in the near future.

“Some of the kids who stay in college will be at a good level,” Ramos hinted. “Inevitably, I think most of them will be turning pro at some point over the next year.”

Two such players who might have difficult decisions coming up are central midfielders Jackson Yueill and Eryk Williamson. Both featured last month at the NTC and are now in New Jersey.

This summer Yueill trained with top-flight Swedish club Joenkoepings Soedra and while he is set to return to UCLA, he is contemplating a career abroad. For the Minnesota native, the U-20 team might offer the former platform to help achieve that goal.

“Being in a professional environment will definitely help me with this team and get more exposure,” Yueill said. “But I think this team is also helping me become a pro. It's keeping my level high and giving me exposure to European teams. So both ways it is good.”

Williamson is in a similar position as he plans to start to his career in Europe whenever he leaves the University of Maryland. The Virginia native had a very strong NTC tournament while wearing the captain’s armband.

“Most of all he's been a leader by example,” Ramos said of Williamson. “He works extremely hard on the field. He has great feet. He has a good demeanor about him. He's calm in the way he addresses the rest of the players. So there's a lot of things that make him a leader.”

At Maryland, he is at a top college program that has produced U.S. World Cup internationals such as Clarence Goodson, Maurice Edu, Omar Gonzalez, and Graham Zusi.

“Just knowing that the Maryland environment itself is pretty much like a professional environment,” Williamson explained. “I'm in no rush knowing that we're good hands with [coach] Sasho Cirovski. It doesn't have so much pressure on us knowing that Maryland is such a good program.

“At the same time it's something we also think about. The U-20 is another place where I can open up a ton of doors. That's one of my top ambitions to go over to Europe. I'm a fan of MLS but I think the best step for me to develop as a player is in Europe. I think that's where I want to go.”

Both Yueill and Williamson know that competition for playing time on this team is intense. Ramos has hinted that top players like Borussia Dortmund’s Christian Pulisic, Arsenal’s Gedion Zelalem, and Tottenham’s Cameron Carter-Vickers might never play for the U-20 team—but the presence of these players still looms large among the squad.

“We all know they are very good players who are doing well overseas at big clubs,” Yueill said.

“It serves as motivation more than anything,” Williamson added. “They're great players and if we're in college instead of Europe, it kind of pushes us to try harder. It forces us to fight harder for our spots.”

The next opportunity for the players to make a case for one of the coveted roster spots will come on Sunday when the U-20 team takes on the New York Red Bulls II in New Jersey.