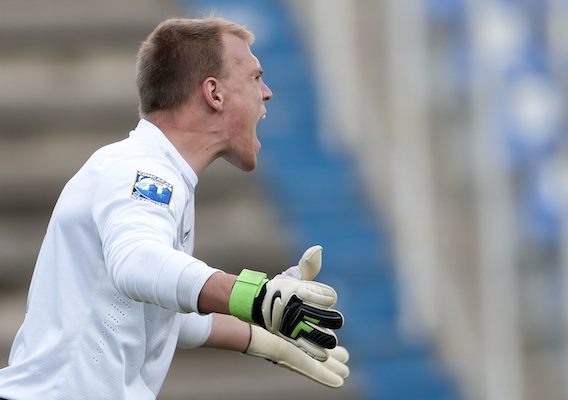 Squaring off against an older and more experienced side, Tab Ramos’ shorthanded U.S. U-20 team lost its footing and skidded to a 4-1 defeat. Here's how it happened.
BY Josh Deaver Posted
May 28, 2013
7:31 PM
In a one-sided affair played in soggy conditions, the U.S. under-20 national team fell to France 4-1 in the opening match of the 2013 Toulon Tournament. Playing against the host nation on Tuesday, the Americans were physically dominated for a much of the contest, and never posed much of a threat. The Americans, in preparation mode for the upcoming U-20 World Cup, left several key players—including Luis Gil and Jose Villarreal—back in the U.S. with their club teams. France, looking determined to win the competition, brought a squad to match their intention. Les Blues featured mostly 20- and 21-year-old professionals, all of whom feature in the top two tiers of French football. Early on the U.S. looked flummoxed in attack and were forced to play deep, allowing France to control possession for most of the first half. The Yanks managed to absorb the potent attack until the 38th minute, when French captain Alexandre Coeff converted off a free kick with an incredible airborne back heel that would make Rene Higuita proud. Given the run of play, the Americans would have been content to head into the locker room trailing by just one goal. But seconds before the whistle blew Gilbert Imbula sent in a shot that slipped through the fingers (and legs) of Southampton keeper Cody Cropper to give the hosts a 2-0 lead. The Americans lone chance in the first half came off a shot from Wil Trapp that nearly found the far post. Alfred Koroma also showed well and seemed to be one of the only members of Tab Ramos’ squad who could match the physicality and athleticism of the more experienced Frenchmen. More of the same followed in the second half. While the Americans saw a little more of the ball, infrequent possession was punctuated by mostly wasteful forays into the attacking third. Daniel Cuevas and Koroma both managed to register shots on goal, but goalkeeper Zacharie Boucher saved the attempts easily. It wasn’t until Ramos subbed out his attacking midfield of Cuevas, Koroma, and Collin Martin that the Americans began to show some life. North Carolina’s Danny Garcia, Colorado Rapids’ Dillon Serna, and Seattle Sounders’ product Jordan Morris all made positive contributions and generally livened up the proceedings. Morris was especially active on the right wing, leading to a few dangerous crosses and half chances. Another newcomer to the under-20 roster, Monterrey forward Alonso Hernandez, received the start up-top for the Americans in a 4-2-3-1 formation. However, due to the lack of midfield combination, he was frequently isolated and saw little of the play. He did draw a dangerous free kick on the edge of the area in the 72nd minute. Benji Joya converted for the Americans’ only goal. Trailing 2-1, a revitalized U.S. squad fought hard and seemed rejuvenated. But only five minutes later, France put the match out of reach thanks to a Stephane Bahoken strike following a poor clearance in the U.S. zone Les Blues put the game away seconds before the final whistle when Lyon winger Ranchid Ghezzal chipped Cropper on a counterattack. The U.S. will continue Group A action on Saturday when it faces Colombia, who defeated South Korea 1-0 earlier in the day. THREE QUICK THOUGHTS
1. Both Alfred Koroma and Jordan Morris made positive impressions on the wing. In stark contrast with the rest of the American squad, this duo managed to overpower and outrun their French opponents from time to time. With World Cup roster decisions to be made, they have certainly made a strong impression. 2. The backline clearly missed the calming influence of Caleb Stanko and Shane O’Neill (not to mention Will Packwood and John Anthony Brooks). Center backs Jevan Torre and Jeffrey Payeras will have to raise their games if they want to punch tickets to Turkey next month. 3. The quality gap separating the two squads cannot be overstated. France chose a comparatively much older side to participate in what is technically a U-21 tournament. The U.S. squad, which featured several academy products and college players, could not match the physical play of a team full of professionals. Josh Deaver is a former academic turned soccer obsessive. Follow him on Twitter, @USFootballGuy.