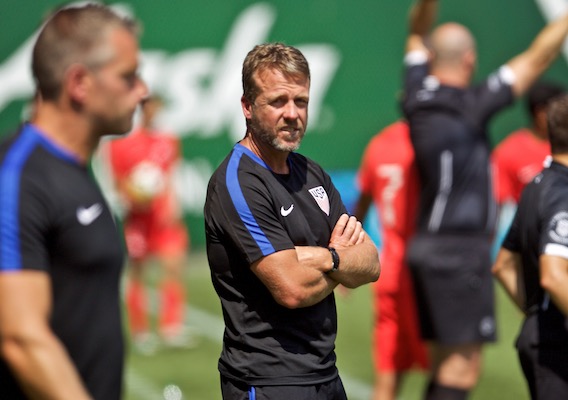 Ayo Akinola scored a second-half goal to give the U.S. under-17 men's national team a 1-0 victory over Ghana in its second match of the World Cup. The Yanks now have six points after two contests.
BY Brian Sciaretta Posted
October 09, 2017
1:00 PM

THE UNITED STATES U-17 men's national team continued its strong start at the World Cup Monday with an impressive 1-0 win over Ghana at Jawaharal Nehru Stadium in New Dehli. The result now gives the Americans six points through two games heading into Thursday’s Group A finale against Colombia.

The game itself was played in difficult conditions with temperatures approaching 100 degrees in the hazy Indian capital. Ghana proved to be a very difficult opponent with a very physical and athletic team.

After a 3-0 win over hosts India on Friday, U.S. coach John Hackworth kept most of his starting lineup together. The Yanks started off the better squad through the first 25 minutes with several good chances with the best coming from Josh Sargent who had a header saved off the line by Ghana’s Danlad Ibrahim.

But Ghana raised its game the final 15 minutes of the first half and nearly scored when a ball was played over the U.S. backline. Goalkeeper Justin Garces came out but was caught out of position. Ghana’s Isaac Gyamfi fell down, however, before he could chase down the ball with an open net in front of him.

In the second half, Ghana continued to pressure and nearly scored in the opening minutes when a cross into the box fell right at the feet of Sadiq Ibrahim in front of the goal but somehow he failed to convert.

The game turned in the 75th minute when Ghana tried to move the ball out of its own third. Once Ghana hit the midfield, Chris Durkin forced a turnover and then made a pass to Chris Goslin. Goslin then played Toronto FC’s Ayo Akinola into the box on the right side. Akinola was able to make a dangerous turn and then fire a low shot past Ibrahim to give the U.S. a 1-0 lead.

The U.S. managed to see the game out without much drama and moved to the top of Group A with six points. A draw on Thursday would be enough to clinch the Group A title.

With Colombia’s win 2-1 win over India, the U.S. still has work to do. It is through to the knockout stages because some third place teams qualify, but a bad outing on Thursday could see the U.S. tumble to third. As of now, however, the Americans have a +4 goal differential advantage as Colombia and Ghana both sit at 0.

Moving forward, Hackworth will have to make difficult decisions as to whether or not to rest key players. These games are played on two days of rest and fatigue should become a significant factor. The Yanks will now travel southwest to the coast where it will face Colombia at DY Patil Stadium Navi Mumbai on Thursday (10:30am ET, FS2).

Midfielder Chris Durkin was the clear-cut player of the game and is emerging as one of the top midfielders of the tournament so far.

Durkin, 17, scored the second goal in Friday’s 3-0 win over India and today he made the defining play that lead to Akinola’s winning goal. Aside from the goals, Durkin has been a force in the midfield on both sides of the ball.

The Glen Allen, Va., native became the sixth homegrown player signed in the history of D.C. United and the fifth youngest in the history of the league. This year, Durkin played once for United in the U.S. Open Cup but also made six appearances with the USL’s Richmond Kickers on loan. Next season it will be interesting to see him try to break into a crowded D.C. United central midfield that already features Russell Canouse and Ian Harkes.

In this tournament, however, Durkin is showcasing himself as part of a possible “golden generation” of young American central midfielders that includes Kellyn Acosta, Cristian Roldan, Tyler Adams, Weston McKennie, and Jonathan Gonzalez.

The Effort was remarkable

Of course the United States needed a little bit of luck in this game. Ghana had a very good stretch at the end of the first half and beginning the second. During that time, Ghana had multiple good chances and it easily could have converted one or more of them.

But over the course of the 90 minutes, the U.S. was better in most facets of the game.

But more noteworthy was the Americans' effort. There was not a lot of squad rotation and the players only had two days of rest after Friday’s game. The sweltering conditions were brutal and Ghana is a very fast, strong, and athletic team. On Friday, Ghana defeated Colombia 1-0 in a game that should never have been that close at the African nation was far superior to the South Americans.

So this was always going to be a battle but the U.S. was able to win this game with a late goal—without a late-game collapse due to fatigue.

The 2015 U-17 team had a ton of talent—including Christian Pulisic, Tyler Adams, and Haji Wright—but this team is playing together better as a unit and is finding ways to win. That is a credit to Hackworth.

Need to get Sargent more involved

Josh Sargent is the U.S. U-17 team’s best player and the U-20 World Cup showed his potential. So far in this tournament Sargent has looked good when on the ball. The problem, however, is getting him the ball. He received plenty of great service at the U-20 World Cup, and many will remember the great assists on his goals including Brooks Lennon’s dream cross in the opener.

So far, Sargent has been isolated up top. Understandably, opponents are focusing on him defensively, but Sargent’s teammates need to get him involved. Andrew Carleton and Tim Weah are talented attacking options who will have more pressure heading into the knockout stages to punish opponents for concentrating defensively on Sargent.