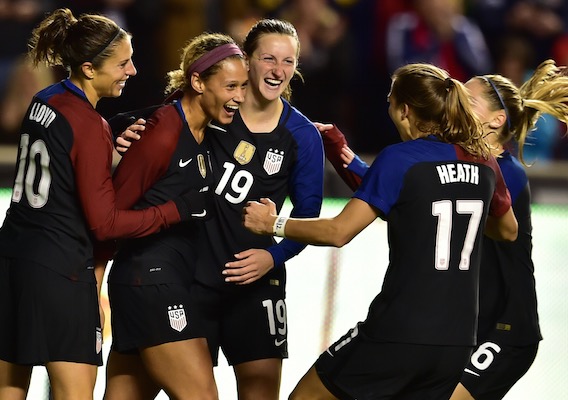 United States coach Jill Ellis mixed things up in Sandy, Utah, trying out a few new players and rolling out a 3-5-2 formation that could shake things up in the short term.
BY John D. Halloran Posted
October 19, 2016
7:55 PM

AFTER GETTING OFF TO A SLOW start in the first half, the United States women’s national team took advantage of four second-half tallies to cruise to a 4-0 victory over Switzerland on Wednesday night in Sandy, Utah.

Calling in a revamped roster as the team begins the long road to the 2019 World Cup, U.S. head coach Jill Ellis surprised nearly everyone with her starting formation—trotting out a 3-5-2 in the first of two friendlies against the 15th-ranked Swiss.

To start the contest, midfielder Allie Long took up duties as the Americans’ center back, flanked by veteran Becky Sauerbrunn and newbie Emily Sonnett. While Sauerbrunn provided her usual excellence, Sonnett had a pair of bad giveaways that resulted in Swiss opportunities in the first half. Most fans, however, wondered how Long would do in her new position, one—by her own admission—she had never played before.

Despite the fact that La Nati failed to put any real pressure on the U.S. backline through most of the match, Long did well. She stepped when needed, repeatedly broke up Swiss attacks before they got started, and covered for her fellow center backs. Long repaid her manager’s faith in the new position, especially considering the fact that Ellis dropped long-time veteran Whitney Engen from the team following the September friendlies.

The midfield trio of Stanford junior Andi Sullivan, Morgan Brian, and Lindsey Horan played well, if unspectacularly, through the first half, especially when they found Tobin Heath roaming in the wide spaces. The outside midfield position in the 3-5-2 did require Heath to play a bit more defense—and more conservative—than usual, but she continued her recent run of good form with another strong performance on Wednesday.

Not only did Heath pick up the U.S.’ second goal in the contest, but she once again impressed with her strong technical ability and flair for the dramatic.

Second half of #USAvSUI coming up next on ESPN2! pic.twitter.com/GIe54YKzs4

The U.S. midfield performed notably better in the second half, sparked to life when Ellis removed Horan and dropped Crystal Dunn—who had started up top—into the No. 10 spot. While Dunn is by no means a classic No. 10, her pace, power, and sheer effort created a number of opportunities for the U.S. and made her a nightmare for the Swiss to defend.

The U.S. also received strong performances from Christen Press and debutant Lynn Williams, who both subbed into the match up top in the second half. Williams scored the game-winner only seconds after the halftime break, while Press picked up a goal and an assist later in the contest.

Looking ahead, it will be interesting to see what Ellis does regarding the formation. The 3-5-2 can provide a number of advantages, as it gives the U.S. three dedicated defenders, numbers up in the midfield, width, and two front-runners. However, it is also a system that a team must commit to over the long haul because of the subtle nuances that must be learned—often through hard experience.

It’s also worth noting that absent the occasional experiment, none of the NWSL teams where the U.S. national team players ply their trade regularly play a three-back system. If the formation is something Ellis is going to stick with, she needs to play and practice with it consistently to avoid the system’s potential pitfalls and get her players comfortable with the expectations of the new scheme.