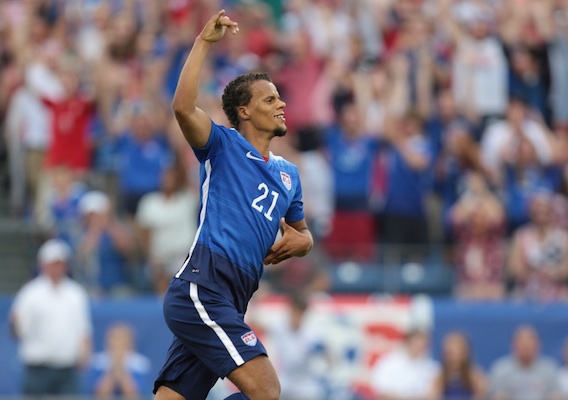 Timothy Chandler, Clint Dempsey, and Chris Wondolowski tallied for the U.S. men's national team as it defeated an overmatched Guatemalan side, 4-0, in a Gold Cup warm-up in front of 44,835 fans.
BY John Godfrey Posted
July 03, 2015
9:25 PM

IT TOOK THE U.S. MEN'S NATIONAL TEAM an hour or so to get untracked but once it finally did the talent disparity became evident and the Americans cruised to a 4-0 victory over Guatemala in Nashville.

The match, a warm-up for the 2015 Gold Cup that begins on July 7, gave U.S. supporters plenty of positives to rally around—and quite a few negatives to worry about. Timothy Chandler scored his first goal for the national team and Clint Dempsey took a confident penalty, but the defense looked disorganized at times and Jozy Altidore flubbed two golden chances to get on the score sheet.

All told, the scoreline flattered the Yanks, as Los Chapines gifted the U.S. one marker thanks to an own goal and Guatemalan striker Jose Contreras missed two absolute sitters that would have made the contest much more interesting.

No, it wasn't one for the time capsule. And U.S. coach Jurgen Klinsmann knew it.

"Result? Nice," Klinsmann said afterward. "Obviously 4-0 sounds really nice. Performance? Not so nice. I’m not happy with that performance. I’m kind of disappointed with a couple things: movement off the ball, speed of play, urgency—things that we talked about before were not executed the way we wanted them to be executed.

"We were lucky to not get a tie, certainly at the beginning of the second half. If it’s 1-1, it’s a whole different ball game. It looks really nice at 4-0, but we have a lot of work ahead of us.”

The game got off to a sluggish start but in the 16th minute U.S. left back Fabian Johnson turned on the afterburners, bombed down the left flank, and floated a lovely cross intended for a streaking Jozy Altidore. The U.S. striker was pulled down in the box, however, and the referee signaled for a penalty, giving the Americans an early opportunity to take the lead despite some shoddy play.

Altidore, Clint Dempsey, and Michael Bradley all seemed interested in taking the penalty, but Altidore claimed it and stepped forward to try to put the Yanks ahead.

Altidore stutter-stepped his way up to the ball and delivered a low, too-slow, right-footed shot that had a chance but Guatemalan goalkeeper Paulo Motta dove to his right, stretched out his right arm, and batted the ball away.

The U.S. hadn't played particularly well up to that point and the missed opportunity seemed to deflate both the crowd and the squad.

A few minutes later, however, a bit of good luck put the Yanks ahead.

DeAndre Yedlin pushed down the right wing and delivered a cross that didn't look particularly dangerous—there wasn't an American anywhere near it—but Guatemalan defender Carlos Castrillo botched his headed clearance and delivered a beautifully placed ball—directly into the back of his own goal.

The Americans didn't deserve the 1-0 lead but they took it nonetheless.

Instead of building on this good fortune, however, the Americans looked flat and slow throughout the remainder of the first half. Though overmatched on paper, Guatemala held its own on the pitch. In fact, the visitors nearly scored twice before the break.

Just after the half-hour mark Carlos Mejia created a bit of space on the left flank and delivered a dangerous cross to a shockingly open Ruben Morales. Fortunately for the U.S., the ball skipped past the Guatemalan attacker and U.S. goalkeeper Brad Guzan swallowed up the loose ball.

At the 39-minute mark the visitors had another great scoring opportunity when Wilson Lalin eluded Chandler on a long free kick and had a free header in front of goal. Once again Guatemala let the Yanks off the hook, as Lalin nodded the ball into the turf and straight at Guzan.

The first half ended with the U.S. leading 1-0, but nobody on Klinsmann's team could have felt good about the performance.

Klinsmann made three substitutions at the half, bringing on Greg Garza, Ventura Alvarado, and Gyasi Zardes as Johnson, Omar Gonzalez, and Graham Zusi all sat down.

The early returns weren't good, as Guatemala nearly scored yet again one minute after play resumed.

The sequence started when Guatemalan substitute (and Seattle Sounder midfielder) Marco Pappa blasted a left-footed free kick into a the heart of the attacking zone. Another sub, Carlos Ruiz, tried to pounce on the ball but just missed. Ruiz distracted Guzan, however, and the ball ricocheted off the goalkeeper and fell to a wide open Jose Contreras, who somehow managed to push the ball wide.

It was a true howler, and Guatemala never recovered from the gilded opportunity.

Over the next 10 minutes the Americans began to dominate possession and seemed likely to take the lead. Both Dempsey and Altidore squandered good opportunities in front of the Guatemala goal, however, with Motta stoning an unmarked Altidore for the second time in the contest.

As the game approached the one-hour mark, a U.S. team that looked so confident and dangerous against Germany and the Netherlands in June had yet to put one past the No. 93 team in the world.

The Yanks broke through, however, thanks to a tremendous goal from an unlikely source. Right back Timothy Chandler, scoreless in his previous 22 appearances for the U.S., created something out of nothing when he cut into the channel and unleashed a blistering 28-yard strike—with his weaker left foot—that sailed past an outstretched Motta and just inside the far post.

Chandler's wonderful strike gave the U.S. a 2-0 lead and a jolt of confidence—perhaps even serving as a reminder that the U.S. should outplay and outscore its Central American opponents.

Fifteen minutes after Chandler's strike U.S. captain Michael Bradley dribbled into the Guatemala penalty area and was bumped to the ground. Another penalty was called, and this time Dempsey stepped forward to take it. The former U.S. captain delivered a confident Panenka that sent Motta sprawling to his left as the softly hit ball eased into the center of the goal and made the score 3-0.

In the 84th minute Contreras saw his second easy scoring chance go to waste when Ruiz freed him up on the edge of the six-yard box. Once again, the striker failed miserably, blasting the ball over a gaping goal from point-blank range.

The Americans closed out the scoring two minutes later when Zardes danced to the end line and fed Wondolowski for a tap-in that gave the U.S. a 4-0 victory....that didn't really feel like a 4-0 victory.

"We have four days to prepare for a game against Honduras. If you guys had a chance to watch them play Mexico two days ago, you can expect a very, very nasty game from Honduras, a very aggressive and difficult game. We’ll talk through that the next couple of days.

"We have to step it up in order to get three points on Tuesday night.”