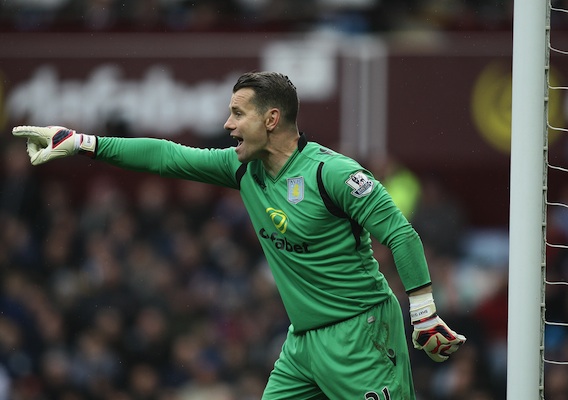 It was a quiet weekend for Americans in Europe as many players found themselves on the bench or out injured. The best news came from south of the border and in Scandinavia, where Stabaek is soaring.
BY Brian Sciaretta Posted
May 04, 2015
3:10 PM

The most disappointing aspect of the weekend was that many U.S. national team players were either on the bench or were out with injuries. The most glaring DNP was Brad Guzan who was benched at Aston Villa in favor of Shay Given for Saturday’s 3-2 win over Tim Howard and Everton. It is certainly not the news Jurgen Klinsmann wants to see from his No. 1 keeper as the Gold Cup approaches.

In the Bundesliga, right back Timothy Chandler did not get off the bench for Eintracht Frankfurt in a 1-0 loss to Werder Bremen. Frankfurt is now winless in its last six Bundesliga games.

Geoff Cameron sat out Stoke City’s 2-0 loss to Swansea on Saturday because of a hamstring strain that limited his training all week.

Danny Williams only came on for the final four minutes in Reading’s season-ending 3-0 win over Derby County.

Julian Green looks set to complete the season with Hamburg without having played a minute for club or country in 2015.

In other words, it was a boring weekend—and the latest sign that Major League Soccer and Liga MX are the driving forces in American soccer.

The highlight of the weekend for American fans came in the Hertha Berlin-Borussia Monchenglabach game which has major implications at either end of the Bundesliga table. Hertha was looking to use its home field advantage to pull away from the relegation fight for good. Monchengladbach was aiming for three points that would move it into third place and a spot in the Champions League group stages.

Fabian Johnson earned the start in midfield for Monchengladbach and John Brooks started in the backline for Hertha.

In the end, Monchengladbach earned the three points with a 2-1 win. Johnson played 76 minutes and left with the game tied at 1-1. Monchengladbach remained unbeaten this season in the 13 games in which Johnson has started. Still, the game was not the best for Johnson who did not have much of an impact on the game.

Brooks, on the other hand, was sharp in the loss. Hertha, however, are coming close to being back in the relegation fight and are now just four points clear of the drop zone with three games remaining.

Former U.S. national team head coach Bob Bradley has Stabaek off to a terrific start in Norway’s Tippeligaen where the club is exceeding all expectations. Its 1-0 win over Mjondalen on Saturday lifted Stabaek to second place through six rounds.

Impressively, Stabaek has won four in a row and all wins have come via shutout. Stabaek has conceded just three goals in six games and its current shoutout streak stands at 375 minutes.

Former Real Salt Lake and Columbus Crew midfielder Cale Grossman has been a significant contributor so far. The St. Louis native has played every minute of the season this year for Stabaek.

It was a busy weekend for Americans in Mexico. Friday’s Tijuana–Atlas game featured two American left backs going up against each other. While Greg Garza scored for Tijuana (and midfielder Joe Corona played the final 20 minutes), Edgar Castillo had the last laugh for Atlas which came up with a 2-1 win. The three points moved Atlas into third place—but also in a three-way tie for first place on points. Club Tijuana, meanwhile, is in a tailspin and has earned just one point over its last six games.

Meanwhile Ventura Alvarado went a full 90 for Club America in a 3-1 win over Toluca at Azteca Stadium. America is in fifth place but just two points out of first place in what has been a chaotic and unpredictable season in Mexico.

Also, Michael Orozco went the distance for Puebla in a 2-0 win over a struggling Leon team.