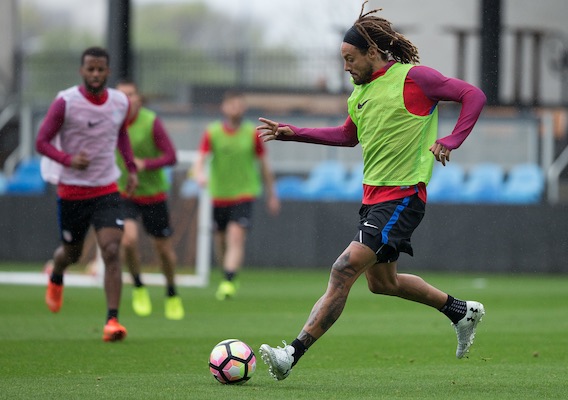 Four more players fell to injury and will miss Tuesday's match, but Jermaine Jones and Paul Arriola are available for selection and could factor into Bruce Arena's plans as World Cup qualifying continues.
BY Brian Sciaretta Posted
March 27, 2017
3:00 PM

ON THE HEELS of Friday's 6-0 rout over Honduras, the United States national team is preparing for another pivotal World Cup qualifier—this time against Panama on Tuesday night in Panama City. Road games in CONCACAF always present challenges but a U.S. team decimated by injuries is hoping a newfound wave of momentum will carry it to six points this international break.

Speaking from the southernmost Central American country, many American players seemed to be upbeat—even while acknowledging that the team has plenty to do to qualify for the 2018 World Cup in Russia.

“It was an important win,” U.S. captain Michael Bradley said. “The points were obviously very valuable. We were able to put our goal differential back in a good place—and for the confidence and the spirt of the team, it was important. So we feel good about things. It's been a good week. Obviously we all understand that because we had one good result that we're not out of the woods yet. We have to understand that it is going to be a very difficult game on Tuesday night. We need more points. We want three and we're going to play in a way we give ourselves a chance to win. If in the end we take one, so be it. But we've got to follow-up the good performance on Friday with another one on Tuesday.

“We can sit around hypotheticals until we're blue in the face,” Bradley added. “But the reality of the situation is that Bruce is our coach and I think he's done a very good job of coming in and re-establishing certain things that we feel had dropped a bit in this recent stretch. We had a lot good days under Jurgen. Friday night was the start of real competitive games with Bruce back. I think it was a really important night.

"I've touched on it a few times: I think Bruce has come in and set a very good tone in terms of his energy and enthusiasm and making sure every guy needs to understand what we're all about."

Midfielder Jermaine Jones, who was suspended for the Honduras match but is available for selection against Panama, agrees that Arena set a good tone but he believes it is the players, not the coach, who shoulder the biggest load.

“We won one game,” Jones said with a sarcastic chuckle. “We can talk after the Panama game. It's too early……I think Bruce Arena came in and did a good job, and he still does a good job of trying to bring a smile back on the face after the two losses. We knew that the pressure was on us and he tried to take the pressure away a little bit and put it on his focus. But in the end of the day, I think it is always what the players show on the field.

Christian Pulisic certainly showed up. The 18-year-old scored a goal and registered two assists Friday, justifying so much of the hype he has generated in recent months. The Borussia Dortmund midfielder wasn't overwhelmed by the environment, and why should he be? A few weeks ago he dominated a Champions League knockout stage against Benfica, assisting on the equalizer goal and scoring the game-winner.

Despite his efforts against Honduras and Benfica, Jones preaches patience.

"What I see with Christian Pulisic is that he's a young kid," Jones said. "Give him time and let him grow. This is what Dortmund does. They don't put him in a spot where he is the face of everything. This is why he plays week-for-week in the Champions League—in good games.

"He played a good game against Honduras. But if he's the face of this country? [after skeptically pausing] I don't know. If he can be one day? Definitely. But he's still young and we don't want to give him the whole pressure. We have, I think, a bunch of guys who are the face or who can be the face. Let him grow but he will definitely be a good player."

Regardless of individual performances, the Panama match should gauge whether this U.S. team has really turned the corner in the Hexagonal. The list of players who are injured or otherwise unavailable was already long, and it grew by four names as John Brooks, Jordan Morris, Sebastian Lletget, and Michael Orozco were sent back to their clubs with injuries.

As is often the case, however, one man's misfortune is another man's opportunity. Lletget did just that against Honduras, scoring the opening goal and playing well before being removed with an injury. Meanwhile, Jorge Villafana built on his solid January camp with an impressive statement that he could be the starting left back for 2017.

One new player was added to the roster: Tijuana winger Paul Arriola, who played well under Jurgen Klinsmann and will be looking for his shot to impress Arena.

“For us as young players you have to wait for your opportunity,” Arriola said. “Unfortunately there was a bunch of injuries in this camp and going into this camp. So now here we are with some younger guys, including myself. That we might have a chance to play. So the most important thing is to take advantage of the opportunity, whether we play or don't play or just in training, take in everything that's been given to me.

"If I'm on the field, of course I'll be ready to help the team win.”

Roster volatility will force Arena to be creative with his starting lineup.

If Jones is back in the XI, who in the 4-4-2 the midfield from Friday sits to make room for him? Christian Pulisic and Michael Bradley are automatic starters so that leaves Alejandro Bedoya and Darlington Nagbe at risk‚ with Bedoya being the most likely candidate. On the other hand, if Clint Dempsey, who only recently recovered from a long layoff due to a heart ailment, is not set for a second start in four days, Arena might elect to go with a 4-2-3-1 with Jones and Bradley playing together as holding midfielders.

The backline will also see another change as John Brooks was forced out of Friday’s game in the second half due to dehydration. Will this force Geoff Cameron from right back into his preferred central defense position or will there be a direct replacement for Brooks—most likely either Ream or Besler?

For players like Besler, Cameron, and others who are over 30, they recognize that this World Cup cycle could be their swan song in international soccer. And for some, they want to end their international careers in strong fashion.

No matter the formation or the choices Arena makes, Jones sees games like the one tomorrow as a way for him to seal his legacy—similar to how Dempsey did with his hat trick on Friday.

“When everybody is really focused and on the same page, we have a good team and we have good qualities,” Jones said. “But you have to show it every time. For me it is always a pleasure to play for this country. Every time I can step onto this field, it is something special.

"I am happy to be back now. I've always said that I want to make it a dream come true and go to one World Cup again and then I think retire from the national team. To make it happen that this country goes, it's not only a big goal for me, I think it is also for Timmy, and Clint and all the other guys who have that last World Cup shot in Russia.”