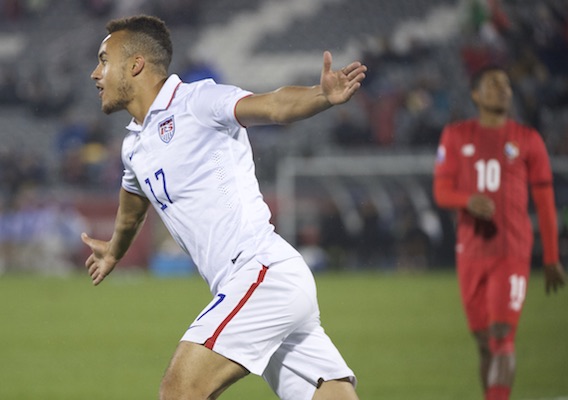 After a slow start, Andi Herzog's U-23 U.S. men's national team scored four second-half goals to defeat Panama and set up a date against either Mexico or Honduras with a trip to Rio on the line.
BY Brian Sciaretta Posted
October 07, 2015
7:45 AM

THE UNITED STATES U-23 men's national team finished off Group A with a resounding 4-0 victory over Panama on Tuesday night at Dick’s Sporting Goods Park in Colorado. With the win, the Americans finished group play with a perfect nine points, outscored their opponents 13-2.

Before the start of the game, the United States knew it had won the group regardless of its result thanks to Canada’s disappointing 2-2 draw with lowly Cuba. Panama, on the other hand, had everything to play for: a three-goal win against the U.S. would keep Panama’s semifinal—and Olympic—hopes alive.

Head coach Andi Herzog rested a few regulars and utilized a 4-2-1-3 formation. Ethan Horvath started in goal in his return to his home state, with Cameron Carter-Vickers and Will Packwood (rather than Matt Miazga) in central defense. Boyd Okwuonu started at right back while Dillon Serna, a Colorado Rapid playing in his home stadium, got the nod at left back.

In central midfield, Matt Polster and Luis Gil played behind Gedion Zelalem, who was set up in the playmaking role. Up top, Alonso Hernandez and Gboly Ariyibi started out wide, with Maki Tall in the middle.

The game started off slow and lethargic, and Panama did have some stretches where it took the game to the United States.

The Americans’ best chance of the half came through Zelalem in the 10th minute, but his shot could not beat Panama's goalkeeper. Unfortunately for the Arsenal product, on loan for the year with Rangers in Scotland, he again failed to make enough of an impact and was taken off at halftime.

At the start of the second half, Herzog made two changes, replacing Tall and Zelalem with Jordan Morris and Jerome Kiesewetter. With that newfound pace in the U.S. mix, it took just five minutes for the Americans to get on the board. The scoring began when Ariyibi moved into the box on the left side and had his cross redirected into the net by Panama’s Fidel Escobar for an own goal and a 1-0 U.S. lead.

Two minutes later, the lead was doubled on a very nice combination between Ariyibi, Morris, Gil and, in the end, Kiesewetter, who was sent into a dangerous position on the right side and fired a low shot inside the far post. The United States then made it three goals in five minutes in the 55th, when Kiesewetter made a run down the right side and sent a low cross in to a sure-footed Morris for an insurmountable 3-0 advantage.

A fourth goal came in the 70th minute after Kiesewetter was brought down in the box on a dangerous run. Real Salt Lake’s Gil—wearing the captain’s armband in place of the Crew’s Wil Trapp (suspended due to yellow card accumulation)—stepped up and converted the penalty despite the keeper getting a hand to it.

The dominant showing in Tuesday’s final match was a fitting end to Group A, which the Americans stormed through from the get-go. They will next head to Sandy, Utah, for Saturday’s first semifinal against the second-place finisher of Group B.

Heading into that all-important semifinal matchup, Herzog looks likely to lean on the chemistry between Morris and Kiesewetter, both of whom have played fantastic attacking soccer so far. Kiesewetter finished group play with three goals, two assists, and two drawn penalties; Morris with four goals and one assist.

The U.S. team won’t know its foe for certain until Wednesday’s Group B decider between Mexico and Honduras. Honduras needs all three points to claim the group and avoid the U.S., while Mexico will take the top spot — and a date with Canada — with either a win or a draw.