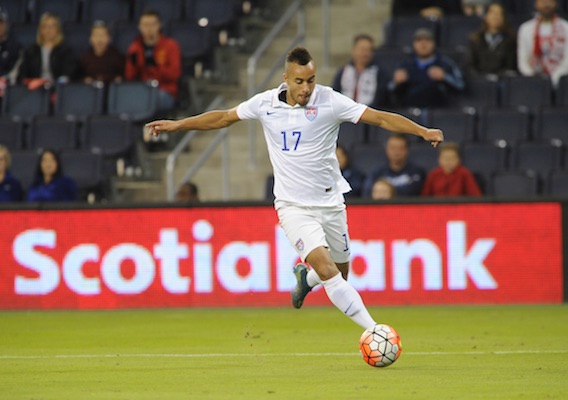 KANSAS CITY, Kan.–The United States U-23 team kept up its perfect start to Olympic qualifying and clinched a spot in the semifinals with a resounding 6-1 victory over Cuba at Sporting Park. The result means that the Americans only need to draw against Panama on Tuesday in Colorado to clinch first place in Group A.

The U.S. team enjoyed a complete performance, with five different goalscorers. Jerome Kiesewetter netted twice and Luis Gil twice played provider, consistently opening the game up with his superb passing against an outmatched and shorthanded Cuban side.

Following a flawed but steady performance in Thursday’s win over Canada, head coach Andi Herzog made a few changes to his lineup. Zack Steffen one again started in goal behind the standout central defense tandem of Cameron Carter-Vickers and Matt Miazga, with Boyd Okwuonu and Marc Pelosi at fullback.

Herzog kept the four-man diamond formation, though, and used captain Wil Trapp in the No. 6 role with Matt Polster on the right side and Emerson Hyndman on the left. In the attacking role, Gil swapped in for Gedion Zelalem, who struggled against Canada on Thursday.

In its opening game, Cuba played to a surprising and hard-fought 1-1 draw with Panama despite being outplayed throughout the contest. As is often the case with international tournaments, the Cuban team was hit hard with defections, with four players leaving the team prior to tournament, and one more not showing up Saturday—only 15 dressed against the United States.

The U.S. controlled possession from the start and found its breakthrough in the 16th minute when Gil hit a perfect in-swinging free kick from the right side of the box that found Carter-Vickers’s head on the far post for a 1-0 lead.

It took 20 minutes for the United States to double its lead, when a short free kick was hit to Polster on the left side and the Chicago Fire rookie swung in a perfect cross that found Miazga for another open header. A 38th-minute Gil-to-Morris-to-Kiesewetter combination then turned into an unselfish tap-in and the rout was on.

In the second half, the U.S. continued its momentum and in the 49th minute found another goal when Pelosi sent a ball across the goalmouth to Kiesewetter, who was there to tap in his second of the game for a 4-0 lead. Another beautiful pass from Gil in the 69th minute sent Hyndman into the box, and the Fulham midfielder fired a hard-driving left-footed shot past the shell-shocked Cuban keeper, Sandy Sanchez Mustelier, for a 5-0 lead.

The final goal for the U.S. came in the 76th minute when Cuba had all but given up and substitute Gboly Ariyibi slid a pass to Alonso Hernandez who was standing still and wide open. With no defenders closing down, the FC Juarez forward struck an easy, low shot past Mustelier for a 6-0 advantage.

The game ended on a couple bad notes for the Americans, though, as Pelosi was stretchered off the field after a harsh collision on the field and Daniel Luis scored Cuba’s lone goal on a long knuckling shot moments later.

Nonetheless, the United States will now head to Colorado on six points for its final group-stage game on Tuesday against a Panama team that has disappointed thus far, having posted just a 1-1 draw against Cuba and then a 3-1 loss Saturday to Canada.

A win or a draw for the US. would clinch a first-place finish in the group, which would be significant in that it would allow the Americans to avoid a very powerful Mexican team in the critical semifinal round. It would take an extraordinary turn of events for the United States not to win Group A even with a loss—but you’d have to figure Herzog’s squad would prefer not to take any chances.