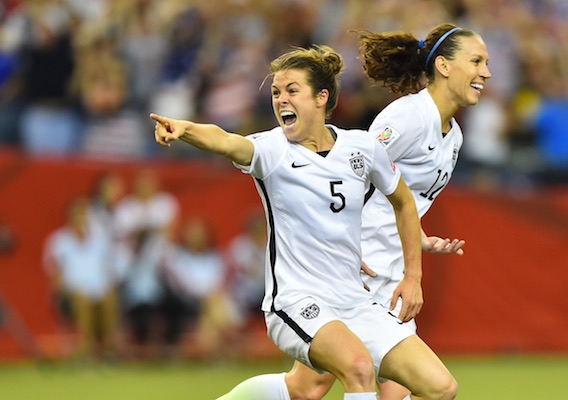 The 27-year-old Georgia native had to wait her turn with the U.S. national team, change positions ahead of the Olympics, and overcome a serious injury. And now? She can't wait to get to Rio.
BY John D. Halloran Posted
September 19, 2015
12:00 PM

FOR MOST OF HER LIFE Kelley O’Hara has excelled at putting soccer balls past goalkeepers.

In high school, she was a two-time All-American, scoring 20 goals her senior year while leading Starr’s Mill High School to a state title. Over the next four years at Stanford University O’Hara would go on to score 57 more goals and win the Hermann Trophy as the nation’s top player.

During those years she also collected a remarkable 24 goals in 35 caps with the United States U-20 national team.

So it might come as a surprise that O’Hara, who has been playing with the U.S. senior team since 2010, headed into this summer’s World Cup having never tallied in 59 appearances for the Americans.

But in Canada, in the World Cup semifinals and on the world’s biggest stage, all of that would change.

In the 84th minute against No. 1-ranked Germany, and with the Americans clinging to a one-goal lead, O’Hara darted into the box to latch onto a driven service from teammate Carli Lloyd. O’Hara threw herself forward and karate-kicked the ball in midair. Her shot went in, giving the Americans a 2-0 lead and virtually assuring them a place in the World Cup final.

“It’s everything any player can ever dream of,” O’Hara told American Soccer Now. “It was incredible. I was just happy to be able to, at that level, at that moment, in that game, to be able to contribute to the team in a way to give everybody the confidence that, ‘We’re going to a World Cup final.’

"On top of that, as a personal achievement, you can’t dream up a better scenario to score your first international goal.”

The U.S. would go on to win the tournament—its first World Cup title in 16 years—by throttling Japan 5-2 five days later in Vancouver. Today, the U.S. is in the midst of a 10-game Victory Tour celebrating that win with its next context against Haiti on Sunday in Birmingham, Alabama (2:30pm ET, ESPN2).

For O’Hara, that goal against Germany and the team’s subsequent success capped off the latest high in an international career that has had plenty of ups and downs.

Breaking into the team in 2010, O’Hara earned only seven caps in her first two years with the U.S. and only started once. And at the 2011 World Cup, she didn’t see a single minute of action.

With a bevy of talented forwards (including Abby Wambach, Alex Morgan, Amy Rodriguez, and Lauren Holiday—who was then still named Cheney and still playing as a forward), competition for minutes up top was fierce. That group also didn’t yet include Sydney Leroux nor did it take into account head coach Pia Sundhage’s decision after the 2011 World Cup to move the team away from a two-striker set and into a 4-2-3-1.

Then came an odd proposal from Sundhage. With playing time unlikely for O’Hara at forward, the coach proposed a move to the backline—one that would challenge the Georgia native to develop a new skill set.

“It was difficult because it’s a different position," O'Hara said. "There are intricacies you have to learn and an entirely different mindset than playing forward.

"When Pia offered me—well, basically told me—that was her thinking going toward the Olympics, I said, ‘All right. I’m all in. Let’s do this.’ And that was my goal—to win a starting spot and play a big role in the Olympics.”

An ACL injury to Ali Krieger during Olympic qualifying pushed up the timeline on the experiment. Fortunately for the U.S., it did: O’Hara shined in the new position. The U.S. qualified for the Olympics and O’Hara would go on to play every minute for the Americans in the 2012 Olympics, helping the team to the gold medal.

Following the Olympics, Sundhage left and the U.S. hired a new coach, Tom Sermanni. In 2013, Sermanni began experimenting with a new cadre of players, with some of O’Hara’s minutes at outside back going to newcomers Crystal Dunn and Kristie Mewis. Then, O’Hara suffered an ankle injury that eventually required surgery and she faced a long spell on the sidelines.

“It was hard," she acknowledged. "It was a very hard year. I came off a great Olympic tournament and felt really good and felt good when Tom came on as the coach. And then, I got hurt pretty soon after he signed on. It was the type of thing where I tried to play through the injury and got to the point where it obviously was not going to work.

“That was the hardest part because it wasn’t an acute injury where it happened all in one play. I went from playing really good soccer to trying to play through this pain and through this injury and not playing 100% because my body wouldn’t allow it.”

The surgery put O’Hara out of action for seven months and, even when she returned, her recovery was uneven.

“Once I decided to have the surgery, coming back from that was difficult because the last time I had been playing, I wasn’t playing well because I couldn’t. So it was just trying to remember that I could play at this level and play to this ability at some point and that it would come back,” said O’Hara.

“It was hard—I had a total ankle reconstruction. It’s not something that goes quickly. Even though I came back with the team about six to seven months after I’d had surgery, I didn’t feel like my normal self until a year after the surgery. At that point, it’s 2014 and we’re heading into [World Cup] qualifying. It was a very long road to come back from that injury and feel like my normal self again.”

Shortly after O’Hara returned, the U.S. went through another transition as Sermanni was fired and replaced by Jill Ellis. The new coach quickly settled in on Meghan Klingenberg as her first-choice left back—with Ali Krieger still cemented in on the right—and O’Hara found herself again struggling for minutes.

“I knew where I stood,” O’Hara said. “I was coming back from an injury and I knew that I’m playing on the best team in the world, so you’re going to have to fight for a spot. It’s not going to be easy. A lot of it was getting my confidence back. I hadn’t had confidence in over a year. I think that was the hardest thing to do.”

When the U.S. got to Canada O’Hara couldn’t find the field—not even as a substitute. In the group stage, she didn’t play a single minute and watched from the sidelines as the U.S. beat Colombia 2-0 in the Round of 16. But during that match with Colombia, Megan Rapinoe picked up her second yellow card which meant she would be suspended for the quarterfinal with China.

Most tipped Christen Press to be Rapinoe’s replacement on the wing, but Ellis surprised everyone with her decision, including O’Hara.

"[Ellis] had mentioned at a practice, two practices before we played China, ‘We’re going to practice you at outside mid today—just FYI.’ That was her relaying what she was thinking,” O’Hara said. Then “she called me in two days before the game, sat me down, and said, ‘We’re going to start you at right mid.’ I was like, ‘Great. I’m ready. Let’s do this.’ I was obviously surprised, but at the same time, was ready and prepared for that. I was just excited for the opportunity because it’s not easy to sit on the bench.”

O’Hara played well against China, putting in a solid effort on the flank before being withdrawn in the second half with a nose injury. But she had done enough to stay in Ellis’ plans and provide another spark—this time coming off the bench—four days later against Germany.

NO ONE MAKES KELLEY O'HARA BLEED HER OWN BLOOD pic.twitter.com/mXFYo9mFpp

But a few days later, when the would go on to beat Japan to reclaim their title as World Cup champions, O’Hara’s thoughts—oddly enough—turned almost immediately to the future.

“We were able to win and then, as soon as it’s over I’m thinking about the next thing—which is the Olympics,” she said.

“I’m so excited for the Olympics. I loved my experience last time. I’m so happy that we were able to achieve what we did this summer, but honestly, as soon as that whistle blew, I was so happy, but then, I’m also thinking about next summer.”

With Olympic qualifying just five months away, there won’t be much time to rest or reflect and O’Hara just hopes her teammates are ready for the ride to start all over.

“I hope everyone’s ready to do this again, because I am.”