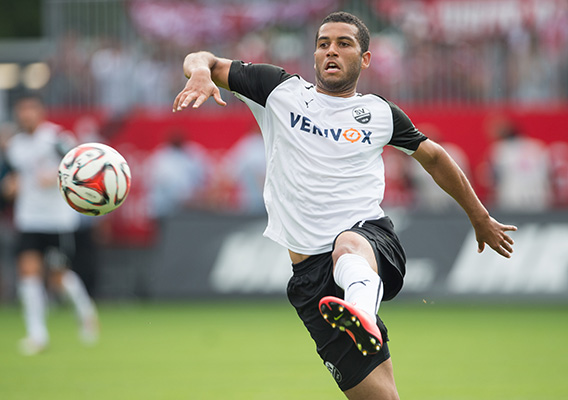 Andrew Wooten and Bobby Wood both got on the score sheet in the 2.Bundesliga while Paul Arriola showed well in Mexico. Here are all the updates—and highlights—from Yanks playing overseas.
BY Brian Sciaretta Posted
August 17, 2015
10:45 AM

Question: Who is the hottest American striker in Europe right now? Easy answer: Andrew Wooten. On Friday the German-born American scored two goals for Sandhausen in a 6-0 road win Paderborn. The 2.Bundesliga season is only three games old and Wooten already has five tallies.


Wooten, 25, has repeatedly told me that one of his career goals is to play for the United States national teams. To date, his only involvement with the U.S. was with a few call-ups to the U-23 team in 2011. Perhaps that will now change as he sits on top of the 2.Bundesliga in scoring and with several other members of the national team’s striker pool either aging or underperforming.

Bobby Wood was not included on the 2015 Gold Cup team and that may have been the best thing for him. As a result he has been with his new club, Union Berlin, from the start of preseason and on Sunday he scored his first goal of the 2015-16 campaign in Union’s 2-2 draw with Kaiserslautern.

Wood, 22, has now started all three of Union Berlin’s games—two draws and a loss.

If there is one member of the U.S. national team player pool who has raised his game in recent weeks it is Joe Corona who is playing terrific soccer since making the move from Club Tijuana to Veracruz. He has settled in nicely and has been an instrumental player for his new team.

On Friday night, Corona delivered a wonder assist with his first touch to Julio Furch in Veracruz’s 2-2 draw with Queretaro. A week earlier he provided a game-winning assist in a 2-1 victory over Chiapas.

Oddly, the California native was substituted out in the 44th minute Friday night—with no injury given as a reason for his removal.

One could make the case that Fabian Johnson is the best American in the game right now, but the Munich native might miss the next several weeks according to Kicker magazine.

Borussia Monchengladbach was on the wrong side of a 4-0 result against Borussia Dortmund in Saturday’s Bundesliga opener. Fabian Johnson started at left midfield but apparently suffered a torn muscle in his right calf and will be forced to miss at least several weeks.

An updated timetable for his return should be available in the week ahead but it is a major cause of concern for the national team. If Johnson misses more than six weeks, it could prevent him from being match fit for the national team’s crucial game against Mexico on October 10—the biggest game of 2015.

Alfredo Morales made his professional debut in the Bundesliga with Hertha Berlin and stayed with the club when it was relegated to the 2.Bundesliga. Last year he was an integral part of Ingolstadt’s promotion to the Bundesliga and on Saturday the Berlin native lined up in his left midfield role and produced an assist in a 1-0 road win over Mainz.

In the 66th minute Morales received the ball out wide and fed Lukas Hinterseer into the box who hit a perfect shot past the keeper for the winning strike (at 1:33 of the clip above).

Bob Bradley’s Stabaek team continues to overachieve in Norway’s Tippeligaen. Projected as a midtable team, Stabaek has settled into second place since the early season and on Sunday it cemented its place as a true contender.

After falling behind to Lillestrom, 2-0, Bradley’s squad mounted a furious comeback, scoring three second-half goals to earn a 3-2 victory. Cole Grossman continues to be a big part of the team’s success, starting in central midfield throughout the season (and earning strong consideration in the ASN 100).

Stabaek trail league-leading Rosenborg by seven points but has a four-point cushion over third-place Viking.

Paul Arriola enjoyed a lot of playing time early in his career at Club Tijuana but when a new coach came in and did not rate him he found himself glued to the bench.

Things are back on the upswing for the Chula Vista, Calif., native who returned to Club Tijuana after a strong showing at the U-20 World Cup in New Zealand. Arriola has resumed his place among top American prospects and on Saturday he came off the bench to start the second half and scored against Cruz Azul in a 3-1 road win.

In a disappointing—yet thoroughly understandable—development, many players on the 2015 U.S. Gold Cup are currently riding the bench for their clubs.

GREG GARZA: The Dallas native has been an occasional starter for Atlas but after a poor performance in a 5-0 drubbing by Pumas, Garza will have to claw his way back into consideration. He was benched for Saturday’s 2-1 loss to Puebla.

ARON JOHANNSSON: This cane as no surprise since he only recently joined Werder Bremen, but Johannsson came off the bench for Werder on Saturday in a 3-0 loss to Schalke.

JOHN BROOKS: Only played the last six minutes of Hertha Berlin’s 1-0 win over Augsburg on Saturday.

TIMOTHY CHANDLER: Was not in the 18 for Eintrach Frankfurt’s 2-1 loss to Wolfsburg on Saturday.

TIM REAM: Ream is not playing for Bolton becaue he has a transfer pending to either Fulham or Queens Park Rangers.

WILLIAM YARBROUGH: Playing time could be minimal for Yarbrough who had a horrific game recently in the Copa MX for Club Leon.

ALEJANDRO BEDOYA: Did not play over the weekend for Nantes in a scoreless draw against Angers—reportedly due to an injury.

DEANDRE YEDLIN: He is nowhere to be seen on Tottenham’s lineups so far this season. A loan might still be possible before the close of the transfer window.