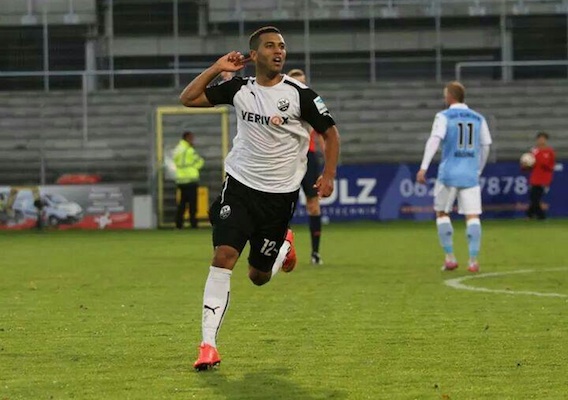 Wooten Reportedly Gets US Call; Zardes on the Move?

Andrew Wooten's hot start in the 2.Bundesliga has been rewarded with a reported national team call-up while Tim Ream and Gedion Zelalem appear to be on the move and Gyasi Zardes may be joining them.
BY Brian Sciaretta Posted
August 18, 2015
7:20 PM
THE EUROPEAN TRANSFER WINDOW has been relatively quiet and there has not been much news regarding Americans Abroad in recent weeks but that has changed in a hurry. Here is some analysis of some huge stories that have emerged in recent days.

Andrew Wooten has been on an amazing start to the 2.Bundesliga season with five goals in his first three games for Sandhausen. According to Bild, the German-born American has been rewarded by Jurgen Klinsmann with his first call-up to the United States national team for next month's friendlies with Peru and Brazil. Prior to this the only time he has played for the U.S. was with a call-up to the U-23 team in 2011.

The 25-year old has historically been a decent striker in the 2.Bundesliga but never been among the best in the league. He began his professional career with Kaiserslautern in the Bundesliga but has since featured in the second division after Kaiserslautern was relegated. He spent time on loans with Sandhausen and FSV Frankfurt before making a permanent move to Sandhausen in 2014. He has a total of 25 goals in first-team soccer- one in the Bundesliga and the last 24 in the 2.Bundesliga since 2012.

The skinny: If the report is accurate (and evidence I have heard suggest it is), the call-up is warranted given Wooten's hot start and because of the rough shape of the national team forward pool. Jozy Altidore is playing poorly while Chris Wondolowski and even Alan Gordon are aging. Bobby Wood is still unproven while Juan Agudelo has had an erratic summer. Other options like Will Bruin and Charlie Davies are less convincing. Jordan Morris is coming off a knee injury and is still in college while Rubio Rubin is still very young.

That leaves Clint Dempsey and Aron Johannsson (who himself is going to have to fight for minutes at Werder Bremen) as the team's best forward options right now. Not many others have stepped up. Wooten's numbers are great to start the season and it’s worth it for Klinsmann to try to ride the hot hand right now. But, he’s 25. While it’s not impossible that Wooten a late bloomer, it is also unlikely.

Yes, Sandhausen is usually a lower-middle table team in the 2.Bundesliga so it is hard to score for them, but evidence suggests Wooten is a slightly better than decent 2.Bundesliga forward. He might be able to help the national team for a bit while other prospects emerge but it is probably not realistic to think he is going to be a major impact player for Russia and beyond.

Then again, stranger things have happened and he might just be that late-bloomer type.

Recently there have been reports about interest from abroad for LA Galaxy and U.S. national team forward/winger Gyasi Zardes. Keith Costigan of FoxSoccer (who also coached Zardes in college) mentioned that he heard interest was coming from Genk in Belgium as well as Brighton & Hove Albion and Reading in England's Championship.

Zardes, 23, has come up through the Galaxy's system. He now features on perhaps the most talented team MLS has ever produced with Robbie Keane, Giovani Dos Santos, Steven Gerrard, Sebastian Lletget, and Omar Gonzalez - just to name a few. Likely none of the teams that are interested will have as much talent as the Galaxy but will the Hawthorne, Ca. native be the next American to make the move?

The skinny: I like the idea of Zardes making the move for a few reasons. First financially, there is a potential upside. MLS rules make it such that it is going to be very tough for the Galaxy to keep Zardes around for much longer. He is due for a pay raise and such deal will likely force him out of LA.

The Galaxy have young and talented players who can also step into the team, so selling Zardes might be in the team's interest as well. Also, he has won MLS Cup and has played at the highest level the game can offer in the United States.

A change of scenery could be good for Zardes in that it will offer more challenges and perhaps give him a different perspective on the game. A move to England would not be a sure thing. Zardes lacks an EU passport and England's FA is aiming to tighten its already tough restrictions. The fact that Zardes has played so much in 2015 including at the Gold Cup will help, but he doesn't have the caps yet for an automatic work permit so he will have to go through an appeal. That is never a sure thing.

A move to Belgium would probably make more sense both for its style and level. The real test for Zardes will be to make a move only if he feels comfortable with the new team and the new coaching staff. He is in a good situation with the Galaxy and is surrounded by great players who have played at very high levels. So a move might be nice, but there isn't any rush.

Earlier on Tuesday, it was reported in England that Arsenal prospect and 2015 U.S. U-20 midfielder Gedion Zelalem might head to Scotland to join Rangers on loan. Rangers, of course, has been the home to many top American players over the years including Carlos Bocanegra, DaMarcus Beasley, Maurice Edu, Alejandro Bedoya and Claudio Reyna.

In 2012, however, the club was rocked by a financial crisis that saw it implode and reform. As a result, it restarted in the fourth tier of the Scottish pyramid. Last year, it was in the second tier Scottish Championship but narrowly missed out on promotion back to the Premier League.

The skinny: There are definitely pros and cons to this move. Among the pros, he would be able to play in the lower levels of Scotland. The competition might even be weaker than the English youth leagues which Zelalem normally plays now. And Zelalem, who is still just 18, would be forced to play under pressure and against grown men - not kids.

Despite the lower tier, there is tremendous pressure from Rangers fans to return to the top flight and reestablish itself as the best team in Scotland. The club has a huge fan base and carries with it a long and proud history. The current group of players have to deal with the pressure to revive the storied club.

The bad news, of course, isn't the stature of the club but the opposing teams he would face. Yes, the Rangers will score goals and that will be good for Zelalem's confidence. Last year, Rangers scored 69 goals in 36 games while Championship winners Hearts had 96.

But Scotland's lower tiers are not of a high quality and can very physical at times. Rarely does it resemble the beautiful game. If Zelalem makes the move, it will be successful if he can take a leadership role and help the storied club return to its rightful place in Scotland. Also, if he can add a physical dimension to his game and adjust to playing against adults, it will also help.

While the level of play might not be pretty, there is huge value towards improving his mentality of handling pressure of fans to deliver on the field. If he earns minutes and delivers, it will help his game in many important areas that often get over looked - maturity, responsibility, and physically. A lot of things have to go right, but if this move happens, it could be a good one over the long haul.

It wasn't expected but Fulham have come in strong at the last minute to make a push for Bolton’s U.S. defender Tim Ream. Last week, it appeared as if Queens Park Rangers would be the winner to acquire Ream but now the odds tilt in favor of Fulham, as the London-club has reportedly made a bid of $3.6 million.

The skinny: It is well known that Bolton has financial problems so selling off its two-time player of the year makes sense. Ream is a known quantity in the Championship and can help a team immediately. It seemed likely that QPR's bid would be the strongest since it recently was relegated from the Premier League and wants to return as quickly as possible.

The news also means that Fulham are indeed serious about competing in the Championship after a shaky season in 2014/15. The bottom line is that Fulham's bid, if accurate, will likely help Ream's pocketbook more and it will be fun to have yet another American at the European club with the strongest ties ever to American players.

The bad news is that it Fulham is less likely to return to the Premier League than QPR. If Fulham, however, is willing to spend, it would be a lot of fun to see another American be part of the team's return to the top flight.

Earlier on Tuesday, Chelsea U-21 midfielder Kyle Scott, who has been with the Blues academy since the U-10 level tweeted that he was called up by the U.S. U-20 national team in what will be its first camp of the 2017 cycle.

Born and raised in England, the 17-year old (he turns 18 in December) Scott's mother is from Chicago and he frequently visits family in Illinois. The midfielder has also played for the youth national teams of England and Ireland (in non cap-tying games) so the news that he is willing to play for the Americans at this camp appears to give U.S. Soccer the inside track.

The skinny: At this point, American fans should be well aware that a player in the youth system of a big club is not necessarily a top prospect. So it is not certain where Scott stands among players of his age group. Still, it is always good to explore all options in the player pool and for coaches to know who is out there.

The next U-20 cycle looks like it will be very strong where it will draw from a solid U-18 and U-17 team in addition to holdovers like Zelalem and Cameron Carter-Vickers from the strong 2015 U.S. U-20 World Cup team.