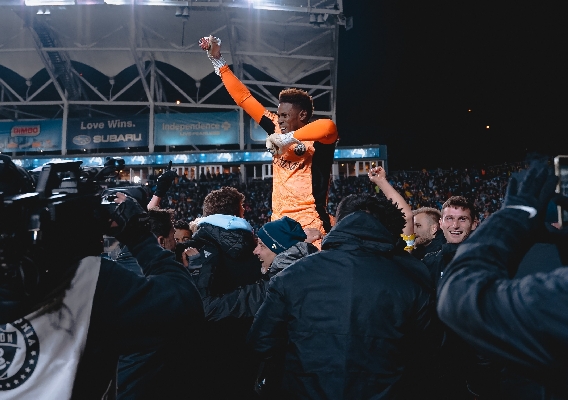 It was a dramatic and memorable day in the MLS playoffs on Sunday as Real Salt Lake upset Sporting Kansas City to continue its miracle run while the Philadelphia Union outlasted Nashville in a wild shootout. ASN's Brian Sciaretta offers up his thoughts on it all.
BY Brian Sciaretta Posted
November 29, 2021
12:05 PM

THE 2021 MLS CUP PLAYOFFS enjoyed a dramatic Sunday with two very intense games which saw Real Salt Lake and the Philadelphia Union advance to their respective Conference finals. Each game could have gone either way, but the winning teams each had a true difference maker in the end.

The stories were compelling. Real Salt Lake is an underdog team playing under an interim manager in Pablo Mastroeni. The club is still waiting for a new ownership to take root and it features several players like Bobby Wood and Rubio Rubin who have fought through difficult situations in recent years. The path has been difficult, but RSL has now advanced past Seattle away and now Sporting Kansas City away to face the Portland Timbers for a spot in MLS Cup.

Meanwhile, Philadelphia has been a team on the rise and is run exceptionally well. Last year, the club sold two U.S. internationals and MLS Best XI players in Brenden Aaronson and Mark McKenzie to European teams. Despite losing two top players, the team has advanced to the furthest point in club history following a win over Nashville in a shootout.

Here are thoughts on each of the two games

Playing at home in front of a raucous crowd, Sporting Kansas City had things going its way early. Aaron Herrera concedes a penalty and Johnny Russell converts in the 24th minute. How would RSL respond?

Mastroeni’s team was magnificent. They weathered the storm from SKC and began to take their opportunities in the second half. The equalizer game from Andres Julio in the 74th and then the winner from Bobby Wood in stoppage time. It stunned Sporting Kansas City. It stunned all the fans in attendance. And it stunned anyone who has paid attention to RSL’s amazing rise the past month – at a time when the organization had nothing going for it.

Despite going up 1-0, Sporting KC was having a very tough time going in for the kill. There were a bunch of things going wrong throughout the first half after Russell’s goal. Daniel Salloi was sloppy. As an MVP candidate, it made sense why SKC was going to look to get him the ball but he didn’t have it on the day. His touches were off, and he couldn’t get anything going.

On top of it, RSL began winning a lot of second balls in their attacking half and the chances began to come. It was a glaring sign that RSL had an edge in desire and was more committed to their game plan.

Sporting SKC had the ability to put this game out of reach, but simply couldn’t do so.

“We lacked a pep in our step or something, but they were they were better team today,” SKC boss Peter Vermes said afterward. “That’s the easiest way to say it."

It went beyond second balls too. SKC gradually began allowing more space to RSL for crosses and in possession. SKC’s backline kept getting pushed back. RSL’s forwards were pinned back at the start of the game but found their way forward in the second half.

SKC simply fell apart throughout this game and by the end, RSL found its deserved winner.

This has been a tough assignment from the get-go for Pablo Mastroeni and the job he has done has been phenomenal. The club has been without proper ownership. The previous head coach, Freddy Juarez, bailed to take an assistant job at Seattle.  It’s best player, Albert Rusnak, has been out for the first two playoff games due to COVID protocols. To be frank, this team didn’t deserve to be in the playoffs but snuck in on a miracle on the final game of the regular season.

Mastroeni, a 65-cap World Cup veteran with the United States, has been able to connect with this team and has helped a roster achieve more than the sum of its parts. It hasn’t always been pretty, but Mastroeni has been focused on finding ways to get results as opposed to putting on a show. He’s also allowed players to be themselves. 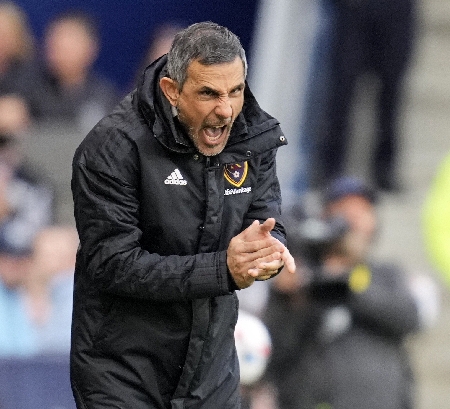 David Ochoa has received a lot of attention this season – with his decision to leave the U.S. set up for Mexico as well as his visible antics throughout the season that have ruffled teams the wrong way. Early in the season it was his taunting of Minnesota United which drew the ire of Minnesota head coach Adrian Heath. Then in the opening round of the playoffs it was against Seattle where Ochoa stood tall in the shootout and gestured for the fans to be quiet. Against SKC, it was more of the same.

Mastroeni hasn’t tried to stifle his players. He’s allowed them to be them, and they’re comfortable and they’re responding. Winning second balls, defending well to the last man, and winning aerials all points to a team that is playing with maximum effort – and that starts with the coach.

It is hard to not be excited for many of the players on RSL who have not had a smooth ride getting to this point.

Rubio Rubin was struggling to stay in the game after a tough fall from the European and Mexican runs of his career. Once one of the top U.S. youth internationals, Rubin rebounded in USL with San Diego under Landon Donovan. He then got his chance with Real Salt Lake and has made the most of it.

Aaron Herrera has had several strong seasons, but he was on the hook early in Sunday’s game after he conceded the penalty to open the scoring for SKC. After that foul, however, Herrera was excellent. He shook off the penalty and put in a massive performance that was key towards delivering the win.

Tops among all of them, however, is Bobby Wood. A former starting forward for the U.S. national team, Wood dealt with knee injuries and a situation in Germany where clubs hoped he would leave on his own accord from his expensive contract if they didn’t play him. After the contract, Wood got a deal with RSL. He came into Sunday’s game in the 72nd minute and scored the winner in stoppage time. His third goal of the season in a little under 700 minutes.

What a finish, what a game. Pablo Mastroeni’s team just does not quit. SKC just couldn’t put the game away #MLSCupPlayoffs pic.twitter.com/TKMxJR5Eml

His celebration showed how important of a moment it was for him.

The Philadelphia Union will meet the winner of the New England Revolution and New York City in the Eastern Conference final after defeating Nashville SC on penalties after a 1-1 draw.

The result wasn’t necessarily an upset like RSL in the West, but it was still a remarkable story of an organization that began the year in a tough situation after the sale of two Best XI players. But the formula remained the same – savvy veteran leaders like Alejandro Bedoya, lesser known but smart foreign imports like Daniel Gazdag, a lot of local youth from its top academy, and strong tactical plans from head coach Jim Curtin. Unlike other top teams, Philadelphia had just one Designated Player in Jamiro Monteiro.

While Nashville took the lead in this one in the first half with a goal from MVP candidate Hany Mukhtar, Gazdag responded with an equalizer just before the half on a scramble following a corner kick.

Here are some thoughts:

Is Jim Curtin one of the top American coaches in the game? It’s hard to say otherwise. He rebuilt this team quickly and in a similar fashion. Leon Flach filled in beautifully all season long in defensive midfield and continues to log a lot of minutes. The young guns buy into their roles.

U.S. U-20 midfielder Jack McGlynn, at just 18, came into the game in extra time and drilled a decisive penalty to help secure the team’s advancement. Other young players like Quinn Sullivan and Paxten Aaronson have also stepped up a big moments during the season.

Curtin knows his players well and how they will respond in certain moments.

Curtin on Jack McGlynn: "When a young kid says I want one, you reward him with it. For him to step up in that moment, there’s a word for it, but I won’t say it in the press conference. But he has brass ones."

Afterward, like any good manager, he gave his players the credit.

"We lost two Best XI players this offseason, which is always difficult," Curtin said. "We lost a lot of key pieces to this franchise. But guys have seamlessly stepped in and done a job for us. This is the furthest we've ever been, it's a huge accomplishment for us.”

Andre Blake’s performance will be remembered for a long time. On the penalty shootout scorecard, it just showed “red X’s” across the board for Nashville.

Blake has long been one of the league’s best goalkeepers and it’s hard to believe he was once a controversial pick with the first overall draft selection in 2014.

This was a special performance and Blake knew it. He was still on the field at the stadium long, long after the game ended. It was one of those iconic moments that will stay with the Union and the league for a long time.