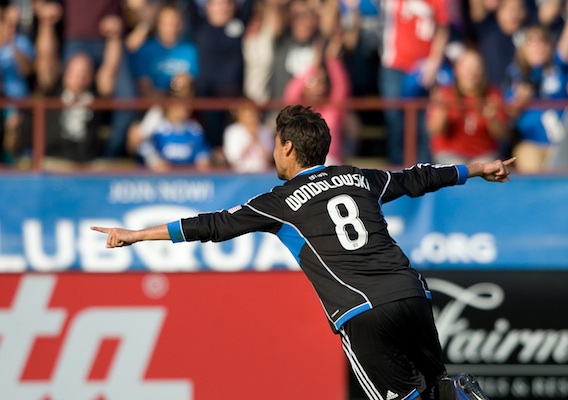 The three-fer leaves him just two goals shy of Roy Lassiter's MLS-record 27 in a single season, a mark that hasn't been touched in 16 years. Wondolowski is currently fourth on the all-time list with two matches to play.

“It’s been surreal, to be honest. The names I see up there are unbelievable. Roy Lassiter and guys like that, those guys are absolute legends. It’s a true honor. It’s something that I do take a lot of pride in, but it hasn’t sunk in yet,” the always affable forward said after the match.

The real question is whether Wondolowski's sustained excellence will warrant a United States national team call up. He made the roster for the match against Mexico along with teammate Alan Gordon, but neither man figured in the historic 1-0 victory. And Jurgen Klinsmann did not bring in the forward for the double set with Jamaica, preferring the talents of Jozy Altidore, Terrence Boyd, Clint Dempsey, and Herculez Gomez.

But with Gomez struggling for playing time in Mexico, you wonder if Wondo's time is now.