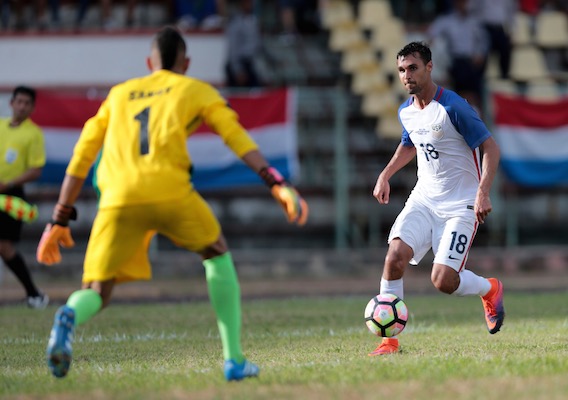 Wondo and Green Score as U.S. Claws Past Cuba, 2-0

The field left much to be desired, and so did the first-half of performance of the visitors. But the U.S. scored twice in the second half to defeat Cuba in a messy friendly in Havana.
BY John D. Halloran Posted
October 07, 2016
9:40 AM

IN THE FIRST OF TWO October friendlies ahead of the final round of World Cup qualifying next month, the United States men's national team downed Cuba 2-0 on Friday afternoon in Havana.

Jurgen Klinsmann made four changes from the lineup that secured advancement to the hex last month and with the win against Cuba, the United States extended its winning streak over Los Leones del Caribe to 10 games.

Chris Wondolowski and Julian Green tallied for the Americans with Ethan Horvath earning the shutout.

Through the first 15 minutes of play, both teams struggled to get anything going as the pockmarked surface in Havana made it impossible for either team to play through their midfield, or even connect the simplest of passes.

In the 17th minute, however, the U.S. found the first opportunity of the game. Finally eschewing any attempt to play possession, Geoff Cameron played a long ball to Jozy Altidore near the top of the 18 and the big forward knocked the pass down for Bobby Wood. With the ball at his feet, the Hamburg front man managed to find his way through two Cuban defenders and earned a corner kick with a shot that deflected over the crossbar.

Five minutes later, Green nearly broke the deadlock with a nifty double cutback on the left edge of the box. Beating his man, Green dribbled in towards goal, but hammered his shot directly at Cuban goalkeeper Sandy Sanchez.

In the 28th minute, the Cubans got their first chance of the match when Roberney Caballero found some space in front of Fabian Johnson and fired. An outstretched Ethan Horvath got just enough of the ball to push it wide of the net.

Seven minutes after that, the Cubans created another opportunity, again on Johnson’s side of the field. Playing a ball down the U.S.’ left flank, Cuba then centered the ball to Arichell Hernandez, who had ghosted into the box unmarked. The pass found Hernandez only 10 yards from goal and the midfielder’s shot forced Horvath to make another save to keep the game tied at 0-0.

That chance proved to be the last of the half and the two sides headed to the locker room with a scoreless draw. At the break, Klinsmann made three changes to his side, inserting Timothy Chandler, Steve Birnbaum, and Wondolowski in place of DeAndre Yedlin, John Brooks, and Christian Pulisic, respectively.

Only moments into the second stanza, the U.S. nearly got on the scoreboard. A long crossfield pass from Green found Altidore near the far post. The Toronto FC man headed the ball across the face of goal to Wood, but Sanchez got in front of Wood’s effort for the save.

In the 53rd minute, the U.S. created a scramble when Chandler won the endline and floated a service into the box. Sanchez knocked the service down, but it fell to Green, who hit a hard shot from close range. A Cuban defender sacrificed his body on the play, blocking the shot and once again denying the Americans.

Then, five minutes later, the Cubans came inches from turning the tables. After a failed American attack, Maykel Reyes nearly hit the U.S. on the counter. Taking the ball down the U.S.’ left side, Johnson couldn’t recover and Birnbaum was slow to slide. In space, Reyes tried his luck and his near-post effort caromed off the inside of the post and across the face of the American net. Cuba managed a second effort, but Horvath finally cleaned up the mess.

That scare finally seemed to be enough to wake up the U.S.

On the next sequence, Green worked a bit of space, again on the left flank, and forced Sanchez into a diving save. Wondolowski, crashing the net, put the rebound into the top shelf to give the Americans a 1-0 advantage with 30 minutes to play.

Cuba, down but not out, came right back at the U.S. in the 65th minute. Again attacking down the Americans’ left side, Cuba served the ball into the box where it found Alberto Gomez on the back post for an open header. Fortunately for the U.S., Gomez’ effort went off the post and the Americans managed to keep their narrow advantage.

Five minutes later, Wondolowski once again made his impact felt and it again involved Green. Getting in behind down the right flank, Wondolowski put the ball on a platter for Green with a perfect pass across the face of goal. Green finished with ease from a yard out to double the Americans’ lead.

The game then seemed to settle into a predictable rhythm until controversy erupted in the 81st minute. Birnbaum took a cleat to the head and crumbled to the ground. The center official, however, failed to call a foul on the play and Cuba went in on the American goal, nearly getting a goal back.

The game then entered a long stoppage as Birnbaum lay on the ground with blood gushing from his forehead and the American trainers wrapping his head in gauze.

The final 10 minutes of play passed without incident with the Americans earning a 2-0 win.

The U.S. next plays against New Zealand on October 11 in Washington D.C.