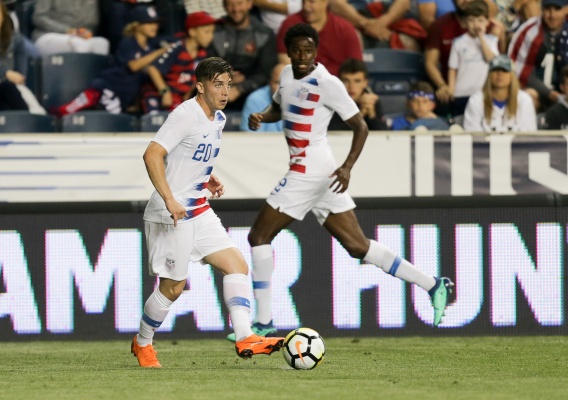 With tumultuous year over, Gooch eyes promotion and USMNT return

Lynden Gooch has been through a lot the past two seasons playing for a club that was in turmoil. But new ownership and a new manager have brough optimism for both Gooch and Sunderland supporters. Now the Santa Cruz native is hoping for promotion and a return to the USMNT
BY Brian Sciaretta Posted
September 19, 2018
6:00 PM
THERE IS NO question that 2018 has been one of the most unusual years in the history of the United States national team. The federation has a new president, the national team has a general manager, and an interim head coach will soon give way to a permanent head coach to build towards 2022.

But at the core of all of the structural overhaul is a new core of players trying to emerge on the American soccer landscape. Over the past 11 months since the team’s failure to qualify for the World Cup, young players have had an unprecedented time to break into the team as the veteran core has remained out of the picture.

Gooch, 22, has been on the peripheral of the player pool for a few years and was called up for the team’s first game after qualifying against Portugal. He was also part of the roster for the friendlies earlier in the summer.

But it is an interesting time for Gooch at the club level. Two seasons ago, Gooch made his Premier League debut with Sunderland but the club stumbled badly and suffered two consecutive season where it suffered relegation.

Now in the third tier League One, Gooch is being relied heavily to be part of the mix to get the team back into the Championship. That responsibility has taken a priority for him right now because that is the long-term key to his national team involvement.

“For me, personally, it's something I am really trying not to think about because it I know how difficult it will be to get called up playing in the league I am playing in,” Gooch told ASN from England. “At the same time I am trying to enjoy myself and play as many games as I can because at my age, I need to be playing week in and week out. At the end of the day, this club is massive. It's the biggest club in League One and it's bigger than most of the clubs in the Championship. It is a Premier League club with our facilities. Hopefully, if we can get promoted, then the national team will be back in the cards.”

The two tough seasons and responsibility of getting Sunderland back to a higher league is one that weighs more personally on Gooch than it does for most other players. The Santa Cruz, Calif. native has been affiliated with the club over half of his life. He began making trips in the summer to play for the club’s youth teams at 10 and then signed his first professional contract at age 22.

It is that attachment that made him want to stay at the club despite a drop to the third tier, instead of seeking a transfer with one year remaining on his contract.

“I knew there would be interest elsewhere but this is the club I've been with a really long time and I would do anything to get the club back where it belongs,” Gooch explained. “The manager really made me feel that I would be an integral part of the team from day one.

“It's been really hard,” he added on the last two seasons. “The past two years have been some of the hardest of my life, let alone in my career being involved with two successive relegations. The club obviously means a lot to me. Without the club, I wouldn't be a professional footballer. They really invested in me and worked to give the best opportunity to have a career in the game. So the club means a lot to me and I hope we can finish the season on a happy note.”

Finding a happy end to the season is going to be hard. Gooch has played in League One before during a brief loan to Doncaster in 2016. He describes the league as not much different from the Championship in that it ultracompetitive and every game is tough (He said: “I think the lower leagues in England are kind of misinterpreted because of how much competitions there is. Everyone is fighting for their lives.”)

The expectation is that Sunderland will be in contention for one of the three spots to earn promotion at the end of the season. Following the team’s relegation, there was major upheaval in the organization. Stewart Donald headed up a new ownership group for the club and Jack Ross was brought in as the team’s new manager.

With that change, Gooch says there has been a lot more positivity within the team. The team got off to a strong start but has only earned two points from its three most recent games. Despite that setback, the team is still near the top of the table in fourth place and its loyal supporters are happy to be watching winning soccer again. Gooch has been among the team’s best players with a goal and four assists. In the opening weekend of the season, Gooch scored a dramatic stoppage time winner against Charleton.

Gooch’s versatility has also been a huge asset to the team. Throughout his career, he has bounced around positions with many different positions. This year he has also settled into a new position yet but unlike previous seasons, he is firmly entrenched in the starting lineup.

“I've been playing as a right wingback in a 3-5-2,” Gooch said. “It's been something that is interesting. I've never played as a wingback before. I've been enjoying it. I am just happy to be playing week in and week out and I think the manager has seen that I can play in that position and really offer the team something. It's been nice and refreshing to check another position off because I've played quite a lot for this club.

“That has been quite tough in the beginning because I can play a so many different positions and every manager has a different thought process as to where I could be playing and what's best for me,” he added. “So it's hard for me to lock down one positions. But this is working. So as long as that's happening, I am happy to be playing where I'm playing.”

With that success, Gooch is hoping that will eventually translate into becoming a part of the new core for the United States national team. Even when he is not called up, he is aware of the team’s progress and sees a lot of potential with the new direction.

The past two years have been rocky for Gooch being part of a team that lacked direction but for the first time in years, things are looking up for him at the club level – and that should only boost his chances with the national team at the start of the cycle.

“The team has been doing well,” Gooch said of the new direction. “Every camp the team has shown its ability to compete against anyone. We're putting in good performances and we're a young group. It is refreshing for the fans to see the young players doing well.”

“Of course I want to play with the national team as much as I can. There is no doubt about that. I've always been proud of the four occasions I've been able to play with them. It's an exciting time. There are new players and there will be a new manager. It's a young group and it's something I want to be a part of.”