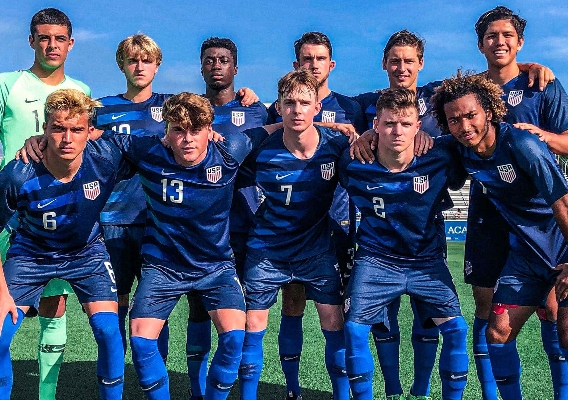 With qualifiers five months out, what could the U.S U-20 team look like?

While it seems like the 2019 U-20 World Cup was just over, we're already at another important period for the 2021 U-20 cycle as there is really just one more camp ahead of this summer's World Cup qualifying. ASN's Brian Sciaretta wrote about where that team stands.
BY Brian Sciaretta Posted
February 13, 2020
6:55 PM

FOR GOOD REASON, there is a lot of talk about the United States national team and the U.S. U-23 team. The full national team has high profile friendlies, the Nations League final rounds, and the start of World Cup qualifying all happening in the next seven months. Meanwhile the U.S. U-23 team will start its Olympic qualifying tournament in just a little more than a month.

Lost in all of this is the U.S. U-20 team which will have a March camp in Portugal where it will face France and the hosts, Portugal. Followed by that, in June it will travel to Honduras to take part in its World Cup qualifying tournament.

This year’s U-20 cycle is vastly different. In years past, the team would start a cycle with numerous camps before a core emerged ahead of World Cup qualifying – typically only a few months before the World Cup. This year, new manager Anthony Hudson has to know his core just months into his cycle because qualifying is so early. Then if the team qualifies for the World Cup in Indonesia, there will be a year-long gap between qualifying and the World Cup.

So it is not too early to talk about what the team looks like now. In the past U-20 World Cup qualifying in CONCACAF has a 20-player roster (18 players plus two goalkeepers).

The March window likely reveal a lot more, but Hudson probably knows a good chunk of his team. And as he told ASN earlier this month, he is preparing as if Gio Reyna and Ulysses Llanez won’t be there. But on the positive side, with qualifying taking place this summer, club releases should be easier to obtain.

So with that in mind, here is a potential roster

The skinny: David Ochoa is the likely starter. The back-up will probably go to either Damian Las or Chituru Odunze.

The skinny: Right back looks pretty good right now. Ian Hoffmann has been very reliable at this age group for several years now and Julian Araujo had a very good year in 2019 with the Galaxy’s and the last U-20 team. At left back, Leon Flach was a big winner at the January camp and Travian Sousa has been steadily improving in Germany.

Central defense is a bit up in the air. Top prospect Owen Otasowie can play both defensive midfield and central defense but is probably more needed in the back for the U-20 team. Meanwhile Leonardo Sepulveda and Jacob Akanyirige both were sharp in January camp. Central defense isn’t the team’s best position but these three could be the early leaders with Julian Araujo also able to cover in the middle.

The skinny: The more defensive and with drawn midfield roles are led by Johnny Cardoso and Taylor Booth. Booth has been a leader of the 2001-born class for quite some time and Cardoso has been coming on late where he is playing for the first team at Internacional. Meanwhile, new Columbus homegrown Aiden Morris is boosted after a solid January camp.

The No. 8/10 positions are all in pretty good shape. Thomas Roberts has looked strong for FC Dallas in preseason and has also been a good player at this age group. Cole Bassett is familiar working with Hudson in Colorado and scored both goals in a 2-0 win over Mexico last month. Indiana Vassilev at Aston Villa and Matko Miljevic at Argentinos Juniors are also earning impressive first team minutes.

The skinny: Even without Uly Llanez, the wing positions are strong at this age group. Cam Harper is quietly emerging as one of the more intriguing prospects of this age group and Konrad de la Fuente should build off of playing at the 2019 U-20 World Cup where he was a starter. Charlie Kelman is a strong center forward and should earn a transfer away from Southend United this summer. Ricardo Pepi would actually be playing up a U-20 cycle if he makes this team, but he is still a solid prospect at this level.

Of course, there are other forwards knocking at the door. Matthew Hoppe and Quincy Butler are just two known examples. Gianluca Busio is young but should also be in the mix for a roster spot.