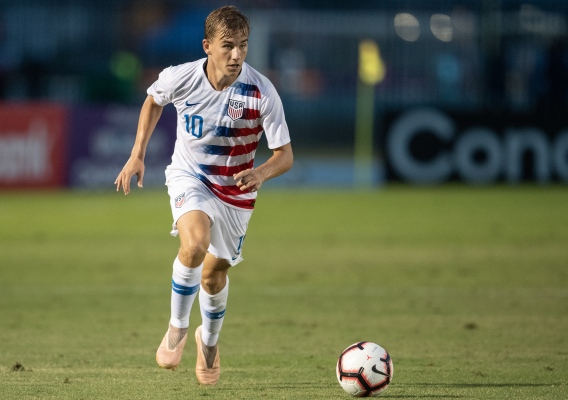 With knockouts in sight, Pomykal eager to step up in Poland & beyond

One of the best players on the U.S. U-20 team so far in Poland has been Paxton Pomykal. ASN's Brian Sciaretta spoke with the Texan from Poland about the tournament, the team, his development, and his future.
BY Brian Sciaretta Posted
May 29, 2019
1:55 PM
THE UNITED STATES U-20 team has a big game on Thursday against Qatar at the 2019 U-20 World Cup that will determine whether it will progress to the tournament’s knockout stages. The Americans narrowly lost their opener to Ukraine last week but rebounded with a solid 2-0 win over Nigeria.

Midfielder Paxton Pomykal, 19, has been one of the team’s best players - not just at the World Cup, but since the qualifying tournament. But a perilous road lies ahead for the team as Qatar can be tricky and a result there might mean a matchup with tournament favorites France in the Round of 16.

“I feel like we're going in confident but at the same time we know that like everybody here battled their way to get here and that they all deserve to be here the same as us,” Pomykal told ASN from Poland. “We can't be going into any game complacent and knowing that it's just going to be easy. Obviously, there's the world's talent is here so we have to go in and be prepared.”

Pomykal has also been one of the most team's most transformative players this cycle. Last season, Pomykal only played sparingly for FC Dallas and typically his appearances were late-game cameos. But when he went to the CONCACAF U-20 championships, he elevated his game en route to the title.

Brandon Servania picks up his first goal of the FIFA U-20 World Cup and levels the score. pic.twitter.com/rdQicMCvvb

Then after qualifying, FC Dallas made a coaching change when Oscar Pareja left to take the Tijuana gig in Mexico. He was replaced by Luchi Gonzalez, who was the team’s long-time academy director. With Gonzalez familiar with so many of Dallas’ young players, Pomykal has thrived at the start of the 2019 season.

“Do I think I'm 50 times the player I was last year? I don't think so,” Pomykal explained. “I think that a lot of it had to do with opportunities and the way things went in Dallas last year. Yeah as soon as I got a run of games at qualifiers I kind of started to get my stride, built some confidence, and then kind of carried that into this season and I feel really good right now on the field. It’s hard being subbed in every third or fourth game for 5-10 minutes and trying to make an impact.”

“Luchi plays a lot of young kids and I think that's our philosophy,” he added. “But it’s his coaching style that I think that fits my game a bit better - a high pressing , possession-oriented team. That's kind of like the way I would like to play and we play that way here at the national team as well. And no knock on the way we played with Oscar I mean it was very successful but it's not as much of how I would want to play but I'd be happy to do it the same - more sit back conservative and then counter.”

But the U.S. U-20 staff also worked hard with Pomykal to get him to open up as a player and become more of a difference maker. Head coach Tab Ramos, a former attacking player himself, specifically met with Pomykal to urge him to take the game to opponents.

In the end, Pomykal’s response has been one of the better American player development stories so far in 2019.

“After speaking with Omid Namazi, who was his coach at the U-18s, he told me: ‘this is the guy. He's the best player.' Then he came to the U-20s and maybe in the negative Jersey guy we are, I was like: 'I need more. There is more there. There is more in the tank. You're really good but can you do more? Can you do stuff that you can barely do? Can you do things where sometimes you're going to make mistakes because you're trying so hard? Make the plays that win games. Go at people. When you have the ball go at defenders in the box and get the defenders on their heels. Don't control the ball and play it sideways so the defenders can take a step towards you. Everything you do, make it forward so that they're maybe taking a step backwards.'”

“I had that conversation with Paxton,” Ramos went on. “I think if you watch World Cup qualifying, he did a lot of that…Now when you watch him play for the first team at Dallas, he does the same. The one thing I love about him he just has this confidence about him.”

Pomykal agreed that it was a matter of the coaching staff urging him to be more confident and fearless when he was on the field.

“I had conversations with the coaching staff in the past - specifically around a couple of camps before qualifiers,” Pomykal explained. “I think that's when my mentality changed a little bit and with Luchi as well. I think I was being a little conservative - not just at national team but the way I play at FC Dallas when you're coming on only playing the 5-10 minutes. You want to make an impact but at the same time you don't want to make a mistake because you want to get back on and that's kind of the way I was playing around that time.”

But in addition to the upcoming games in Poland, the future beyond the U-20 World Cup is perhaps even more interesting for Pomykal. The U-20 World Cup is one of the most scouted tournaments for youth soccer and FC Dallas could also soon be on the receiving end of bids for a player it developed through its own academy.

In addition, FC Dallas will also be in a race for the playoffs and Pomykal, along with others on the current U-20 team, could find himself a big part of the upcoming U-23 team which will attempt to qualify for the 2020 Olympics. There is also the possibility that United States national team manager Gregg Berhalter might call-up Pomykal to the full national team.

The U-20 World Cup has been an important part of many young American players. Matt Miazga first garnered interest from Chelsea at the 2015 tournament. Josh Sargent burst onto the scene in 2017 and landed his Werder Bremen deal shortly after. Tyler Adams became widely known to American fans in 2017 and Erik Palmer-Brown earned a contract with Manchester City largely because of his U-20 performances. Even DeAndre Yedlin used his 2013 performance (combined with a starting role with Seattle) to make the 2014 World Cup team and sign with Tottenham.

When asked about scouts in Poland, Pomykal is somewhat dismissive about it being a motivating factor but noted that he is aware there will be more eyes on him and his teammates.

“I mean every single game these days is televised,” Pomykal said. “For us MLS guys, it's not like we play in a league that's not televised. Every single game we play anybody around the world can tune in and watch. Obviously, I know that there's going to be people there watching but it shouldn't really make a difference to anybody here knowing that they're there because you never know who's watching in any game.”

It is turning into a potentially big year for Pomykal - and when all is said and done Poland might just only be the start.