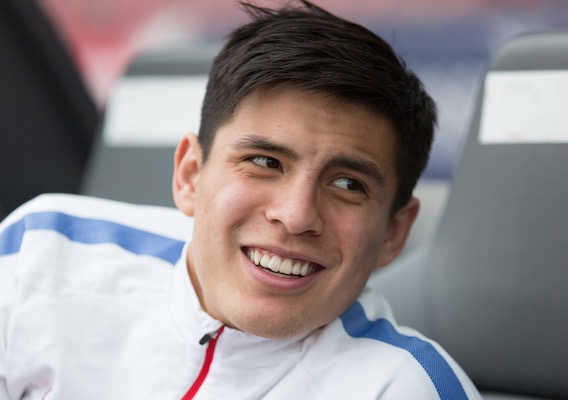 With Injury Behind Him, Rubio Rubin Now Locked In

The FC Utrecht attacker suffered a sophomore slump in 2015-16, and a serious ankle injury limited him to fewer than 400 minutes of playing time. But the Oregon native is ready for the coming season.
BY Brian Sciaretta Posted
July 28, 2016
9:35 AM

THE ROAD for a young American soccer player abroad is often rocky—both on and off the field. The competition for playing time is fierce and bouts of culture shock and homesickness often occur. Sometimes when a player appears to have made it, he hits a wall and struggles to recover.

Rubio Rubin, 20, has been viewed as one of the top U.S. prospects for several years. He was a star for the U.S. U-20 World Cup team in 2015 and as an 18-year-old in his first professional season for Utrecht in the Netherlands, he even managed to log more than 2,000 minutes—a number few American teenagers reach either in MLS or abroad. These achievements paved the way for three U.S. national team caps, with his first coming in November 2014 in a 2-1 loss to Colombia in London.

While it seemed like the sky was the limit that fall, Rubin hit a wall in his second year. Competition for playing time ramped up at Utrecht and it was made far worse when he suffered a right ankle injury that required surgery and a pin. Sidelined for six months, Rubin struggled for playing time. He logged fewer than 400 minutes his second season.

“The injury was the one of the toughest things I've gone through in my career so far,” Rubin told American Soccer Now. “I was out for six months. After that it was, 'How long is it going to take me to get back to fitness?' I really didn't get with the first team until six, seven months and then I was riding the bench for a while. Having to sit on the bench week-in and week-out without even getting a minute after an injury, that was hard.”

In the offseason, Rubin understood what he had to do. He returned back home to his native Oregon and did not take any time off. Instead he worked out extensively with an intense regimen at Portland’s Twist Sport Conditioning Center for fitness. He also played with a local team to hone his technique and rebuild strength in his right foot.

“I went back home without even taking a vacation, and I just worked hard,” Rubin recalled. “Instead of taking four weeks off I took this summer to improve in some spots and have that mentality. I was in a cast for six weeks so it took a lot of strength out of my right ankle. It felt different so I went back home to work on my explosiveness and my quickness and strength. I also spent time on my first touch and my technique.

"I did a little bit of finishing too—you have to day that as a striker. I tried to improve things. That was my main focus.”

The work appears to be paying dividends for Rubin. So far in preseason he has been a regular starter for Utrecht, playing mostly as a supporting striker in a 4-4-2 formation (his preferred position). Things are very much up in the air right now at Utrecht as the club’s top striker, Sebastien Haller, is rumored to be making a move to the English Premier League. That could lead to Utrecht acquiring new forwards or fill the vacancy from within.

With the Eredivisie season fast approaching, Rubin should have a sense of where he stands very soon. This weekend Utrecht will take on Union Berlin in its final preseason friendly. On August 6 it will host defending champions PSV Eindhoven in the season opener.

“So far this preseason I've done a good job to show the coach I deserve to start or to play,” Rubin said. “I want to play every game and be a key player. I think this has to be my season. It’s now or never, pretty much. I want to set that pressure on me as well. I want to score goals and help the team win. That should be my mentally and just be 100% focused in doing well on the field but doing the best I can off the field. I want to take on the season head on and go all out.”

Rubin’s progress will likely impact the U.S. national team, which has suffered through a dry spell with forwards recently. Looking at current pool, Clint Dempsey and Chris Wondolowski are long in the tooth while others like Terrence Boyd and Aron Johannsson are only now recovering from long-term injuries. Meanwhile, Jozy Altidore has been injured frequently and Jordan Morris is still only a first-year professional. Within the last few years, only Bobby Wood has established himself within the team.

During his recovery, Rubin was in contact with Klinsmann, and the coach offered him encouragement. Klinsmann has been bullish on Rubin after calling him up shortly into his first professional season and starting him in a high-profile friendly against Colombia.

According to Klinsmann, Rubin is facing a challenging stage of his career. For the German coach, it has been a huge challenge for American players to make the transition from being a top youth player into an effective professional at a younger age.

“You want them to be hungry for the next step,” Klinsmann said during Copa America Centenario. “You want them to have a fight that takes them to the next level. We struggle traditionally with our 18-23 year old generation....We always tell them: talent is not even 50% of what you've got to do. The other 50% is more important than your talent. It's what you make out of it.”

“I think it’s 100% true,” Rubin said of Klinsmann’s remarks. “Young Americans, we kind of struggle at times and we kind of doubt ourselves. We always get talked down on. People say we’re not good enough as Americans. People say you play basketball or American football, but you don’t really play soccer. So you hear that a lot. A lot of people in Europe don’t think Americans are there yet. So the hardest part is trying to find that confidence, truly believing in yourself - going out and playing to the best of your abilities and enjoying your football.

"After my injury, it was really hard for me to find my confidence. Jurgen has a point and putting in the work on and off the field, hitting the gym—it makes sense."

Another hard part about the injury for Rubin wasn’t just the time he missed with Utrecht, but it was also the time he missed away from the international game. He was unable to take part in the U-23 team’s Olympic qualification which ended in a second consecutive failure to qualify for the games—adding to his frustrating year.

Rubin is now too old for any youth national teams and his next goal is making a return to the full team as it builds toward the 2018 World Cup in Russia. As it stands right now, there is an opening for him but only if he succeeds at Utrecht.

“I’ve been with national team before and it’s an honor,” Rubin said. “I want to well with Utrecht to get another callup from Klinsmann. I just have to prove to him and to the team I deserve a call-up. Both things are going to be on my mind. Whenever I see a guy jump over me, it’s hard. I want to be the guy that goes in. I guess it’s good to have that pressure on my shoulders.

"It helps me strive for great things.”