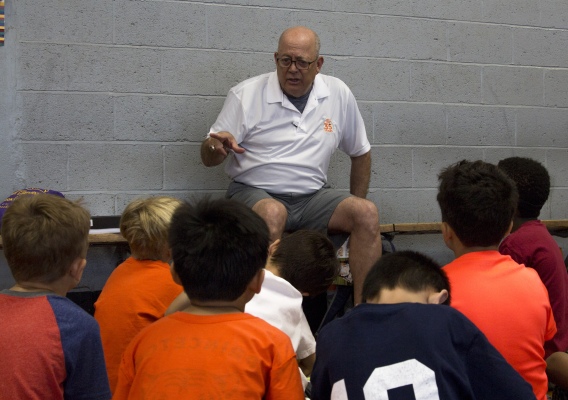 As one of the most successful high school coaches of all-time at Newark's St. Benedict's Prep, Rick Jacobs coached a lot of talented players. But now with Benedict's alums taking powerful coaching and front office roles, he gives insight into their past.
BY Brian Sciaretta Posted
December 05, 2018
4:00 AM
NEW YORK - When Gregg Berhalter was announced as the new head coach of the U.S. national team on Tuesday at a press conference in New York, Rick Jacobs stood in the back behind the media. As the former soccer coach of St. Benedict’s Prep in Newark, he has seen players from that program not just move into the professional ranks, but now take high profile jobs in influential ranks.

A 1991 graduate, Berhalter will be responsible for reviving a team that has gone through a brutal stretch in recent years. In addition to Berhalter, the Benedicts program has also produced Tab Ramos who is the head coach of the U.S. U-20 team and the federation’s youth technical director. Ramos has overseen the progress of many of the top young American players and his U-20 teams have won CONCACAF twice in a row and have advanced to two straight U-20 World Cup quarterfinals. Then there is Claudio Reyna, the former U.S. national team captain, who is in charge of soccer operations for New York City FC.

As the head coach from 1985-2010, Jacobs led six of his St. Benedict’s soccer teams to national titles and presided over a 131-game winning streak. The early part of his tenure came at a time when New Jersey was a hotbed of soccer and produced many of the player responsible for the sports growth in the modern era of the American game.

Jacobs attended the press conference as a guest of Berhalter and admits it was a thrilling moment to see one of his former players take on such a huge role. ASN caught up with Jacobs after the press conference and spoke with him about Berhalter, the massive influence Benedict’s alums now have in American soccer, and why New Jersey was so important to the start of the modern-era of soccer in this country.

Brian Sciaretta for ASN: There is no secret that St. Benedict’s Prep had great players but now Gregg Berhalter has been hired as the head coach of the U.S. national team. Tab Ramos has been very successful as the head coach of U-20 team and the federation’s youth technical director. Claudio Reyna is now the director of football operations for New York City FC. Are you surprised that Benedict’s alums are not very important people higher up in American soccer?

Jacobs: I think the simple answer is that it doesn't surprise me at all. Look, great soccer players don't always make great coaches. The road is littered with failures of guys who were great players but who could not connect with guys who were on the bench, guys who were struggling. When I coached at Benedicts it might be a great story, if it was true, if I was an excellent player who entered into a successful coaching career. But the fact of the matter is that wasn't the case at all. I was pretty average.

But when you look at somebody like Tab. Part of it for me, in my humble opinion, is when you look at somebody who was as great as Tab, it's not always easy to be a leader. You're not always able to convey how you see the game because although you worked incredibly hard at it, there is a sixth sense in what was given to you. Tab is an example of a guy who was always brilliant. To watch Tab now develop and mature into what I can tell you is a much different coach three to five years ago. I think he would even tell you that. He's a guy who has worked at his craft and is now bearing the fruits of that. He’s learned his lessons well.

You look at somebody like Claudio who was and is remarkable. I would watch him play from the sidelines and I was like: 'this is a treat. I'll look back and say that I had a front row seat to that.' When Claudio came back and started to get involved with U.S. Soccer on the technical side, some of the early conversations were like: 'do you ever want to be the national team head coach with all the experience you've had?' But because Claudio is so thoughtful, he said that would be so disrespectful because I would need to invest all kinds of time into coaching and licenses and start to look at things like a coach, not a player. Now he has taken a different tact and it’s awesome in terms of what he's doing at NYCFC.

Then you look at somebody like Gregg. Gregg and Claudio were teammates at Benedict’s. Gregg was a very good player but he typically played for us as a traditional stopper/sweeper. He didn't have quite the pace some of the forwards we played against had. But his ability to read an angle and understand where the ball was going was great, he was just analytical that way.

Am I surprised now that he finds himself in this position after North Carolina, the Olympics, the national teams, then in Europe? It doesn't surprise me in that way. You have to know his pedigree, his parents - he comes from really good stock. It's a different journey but I am not surprised where he is.

ASN: US Soccer has gone through some really tough times lately. Berhalter is going to be walking into a tough situation where a lot is asked of him and the fanbase is a bit demoralized. How do you think he will be able to handle that added responsibility?

He mentioned it briefly and given more time I think he would have dug into it, but I think time will tell it. But in my opinion, I think he's going to develop a championship culture. He's going to be able to have guys start to consider how important character is to their team, each other, the coaching staff. I think he's going to galvanize this group in a really fun and exciting way.

ASN: You seem to maintain a strong relationship with your former players. How often do you speak with them?

Jacobs: Tab was a supporter of my time at Benedict's but I did not coach him. Tab left just as I got to Benedict's. But he is responsible for me being there because Father Edwin, the headmaster at Benedict's, saw Tab as an unbelievable talent and believed that Benedict's and where it was in the middle of Newark, could attract all kinds of kids from around the world to play. Tab did not have the supporting cast we had during my 25 years there. But Tab, not realizing it, was the Pied Piper of the program.

I talk to Tab once in a while at events and I respect everything he's done. With Claudio, I became really close to his mom and dad. I wouldn't say we speak weekly but we've supported each other celebrations and tragedies and if need be, we'd be there for each other.

I was close to Gregg's mom and dad. When I was working for the Union, I would always see Gregg whenever he came to town. We've been texting each other fairly regularly, especially now that this was getting hotter. I was letting know how proud I was for him.

I think the country is in for a real treat because he comes at a time when US Soccer desperately needs what Gregg has to offer.

ASN: After Benedict’s and college, Berhalter left for Europe when not many Americans did that. He went on to captain two European teams. He has a lot of experiences to draw from.

Jacobs: I think that's what makes him a great candidate. He can draw a little from here and a little from there. It is interesting

When people ask how I helped develop Claudio, I'm like: 'don't be silly.' Claudio is the product of great parents and a rich history of the game. It's similar to Gregg.

Nobody should forget Benedict's is a 150 year old school in the middle of Newark. If somebody like Gregg is going to make a decision to come here from Tenefly, NJ - soccer can be a hook but you have to find other stuff. His mom and dad allowed him to do that. When it wasn't a popular decision in his house, they let him leave school early for Europe. I think this is a guy who had an unbelievable journey.

When people talk about his resume or it being too early, I am like: just wait.

ASN: What made Jersey such a hotbed and important area for American soccer in the late 80's and 90's? Not just the Benedict's players but also guys like Tony Meola, John Harkes, Peter Vermes. So much of the start of the modern-era of American soccer came from the area. Why was that?

Jacobs: Some of it is the nature of New Jersey. Sometimes stuff happens when adults, programs, kids and families take risks are in the same area at the same time. I don't want to underestimate the value timing. A place like New Jersey and the Newark area has always gotten tremendous amount immigrants from all over - over the course of decades. Harkes was Scottish, Meola was Italian, Tab is Uruguayan, Claudio is Argentinian and Portuguese. Gregg's grandparents and their stories about the success and businesses they were in Long Island. These are hard-working people. Could it have happened somewhere else? Sure. Peter, was able to roll in with those guys.

There were just a handful of clubs for those guys to play in and at the time, it didn't hurt. All of those guys together, were able to push each other.

That was a golden age of players who are now turning into exactly what U.S. Soccer has wanted and that is great Americans players after their playing careers are finding their way into front offices, national team management, MLS sidelines. That starts to complete the circle of why I think the next 8-12 years are going to be great. It’s easy to throw stones from the sidelines about what is wrong. I am not a believer in that.

ASN: There is so much talk about the national team needing an identity. But I think that back during the days of Ramos, Harkes, Meola, Reyna, is that the U.S. team had an identity. No one worked harder than those guys and the U.s. team had that reputation. They didn't even take friendlies off. They were confident in their own abilities but played with such a chip on their shoulders because they thought the rest of the world looked down on them. That identity disappeared.

Jacobs: Guys like Claudio, Tab, Gregg, Meola, and Harkes, there was no such thing as a friendly. It didn't exist. They were given the game with respect. I don't think there is a bigger compliment you can give a soccer player. If you were given the game like Gregg, Claudio, Harkes, Tab, Vermes, they were polished at a higher level but they never needed to be told to step up. It's all they knew. They only knew 100% engagement. Whether it was a training session or a game that wasn't even part of a competition.