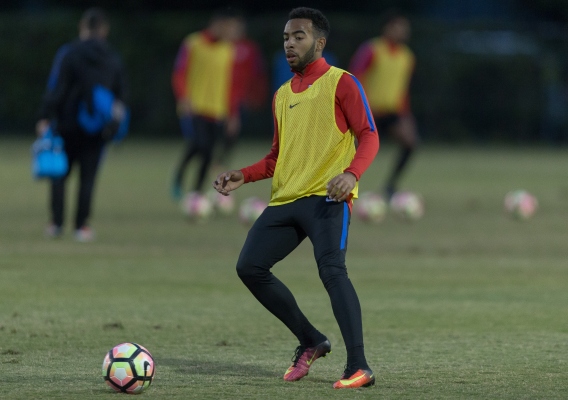 There is a lot that needs to be discussed today including the Red Bulls Achilles Heel, two young Americans on the the move, the U.S. U-18's are rolling in the Czech Republic, and the ongoing mess in Columbus.
BY Brian Sciaretta Posted
August 23, 2018
6:00 AM
There is a lot of midweek news to breakdown from both domestic and abroad – ranging from good, bad, and ugly.


There was a lot at stake last night for both New York City and the New York Red Bulls last night when the two rivals met in the Bronx.

The game was not great but it was intense. Typically games at Yankee Stadium are subpar with the narrow field and the filled in infield portion. But the atmosphere makes it the best rivalry in the league.

Both goals were scored by two of the best forwards in the history of the league in Bradley Wright-Phillips and David Villa. But I was at the game and have some observations.

1) Where was the Red Bulls intensity to start the second half? At that point, Chris Armas’ team was up a man and up a goal. The Red Bulls actually let New York City carry the play at that point.

2) Up two goals, why can’t the Red Bulls break a bunker? This is why the team fell to Chivas in the Champions League. In 11 v. 11 matchups against good opponents, the Red Bulls have a good style. Why can this team make adjustments to beat teams that bunker it in? The team looks completely out of ideas when it is in a situation where it has a lot of possession?

4) NYCFC showed a lot of heart in pulling out the draw and defending well when down to nine players for the final 23 minutes.

5) If these teams face each other in the playoffs, it is going to be great for the league, the New York area, and its soccer fans.


As I reported on twitter last night, I’ve heard Portland Timbers midfielder Eryk Williamson will be heading to C.D. Santa Clara on loan for the entire 2018/2019 Portugese season with Portland holding an option to recall the former University of Maryland standout in January.

Williamson, 21, has been terrific this year for T2 in the USL but has been unable to break into the first team under new manager Giovani Savarese.

Santa Clara was recently promoted to the top tier in Portugal and played Braga to an impressive 3-3 draw in its most recent game. It will be a good opportunity for Williamson to test himself in a league that boasts some very good teams.

Based in the Azores, Williamson will be on an airplane a lot to travel for games but will also live in one of the most beautiful places on earth. Not a bad setup.


What is Lynden Gooch’s level? He’s played in the Premier League but played less in the Championship. Now in League One, he is dominating for Sunderland where he has either scored or assisted in each of the club’s first four games (one goal, three assists).

But a lot of his assists and chances come from plays Gooch also creates through forcing turnovers.


Lynden Gooch has either scored or assisted in every one of Sunderland’s first four games to start the League One season. Here is his assist today #USMNT (via @WeAreWearside) pic.twitter.com/WUxEzmmfIV

He’s better than League One. The club was completely dysfunctional in the Championship so there were factors out of his control there. He is a tough player to read but it would not be surprising if this is the only season he plays in the League One. Either he gets the team promoted or he gets sold.


Antonee Robinson, 20, has been one of the best surprises in American soccer over the past two years. He’s recovered well from a brutal microfracture surgery to earn a spot on the U.S. national team where he is a starter – and likely a starter for the Olympic team as well. He was instrumental in helping Bolton avoid relegation last season and he should get a chance eventually with Everton.

This season, he is continuing to impress at Wigan which is newly promoted but is off to a strong start in the Championship season. Every game there are several moments when Robinson’s speed is an important factor in Wigan’s offense. Yesterday was no exception as Wigan pounded Stoke City 3-0.

Meanwhile, Stoke City look abysmal and a shell of the teams that used to finish midtable in the Premier League. For U.S. international Geoff Cameron, it is sad. Fortunately for him, he will be on the move sooner than later and wherever he goes, it will be a happier place.

Yesterday, Anthony Precourt revealed the logo of what the team will look like should it move to Austin.


MLS Austin now has a name and a badge, and even its own color. Will it have Columbus' soccer team? #SaveTheCrew https://t.co/GyGZDvAtTU

The logo was panned for its lack of originality and blandness. It’s easy to see why.

Who knows if Austin would be successful as an MLS city but the enthusiasm for the team just does not seem to be there. Everything seems forced – both in stripping the team from Columbus, forcing it into a questionable market, as well as the grass roots appeal in Austin.


Several U.K media outlets are now reporting that Tottenam and United States national team central defender Cameron Carter-Vickers will join Swansea on a season-long loan. Swansea was recently relegated out of the Premier League but is looking to make a quick return to the top flight.

This will be the third different Championship team that Carter-Vickers has played for inside of a year. Last year he started with Sheffield United but played the second half of the season with Ipswich Town.

With young players, you like to see them step up every year after they breakthrough at a particular level. Carter-Vickers established himself in the Championship but Swansea is a little bit different in that this is the best opportunity Carter-Vickers has had towards playing in a promotional race. While Sheffield Untied flirted with a push for the playoffs at the start of the season, it was a midtable team.

Swansea will be a step up in intensity for Carter-Vickers but if he does well again, it should be his last season in the second tier if he wants to reach his potential.


The United States U-18 team is rolling in the Czech Republic at the Vaclav Jezek Youth Tournament with a 2-1 win over the United Arab Emirates and a 5-0 pounding on Bulgaria.

At the tournament, there have been a lot of standouts. ASN has learned that Sacramento FC forward Roberto Hategan, who scored both goals against the UAE, continues to be a standout at this age level. FC Dallas’ Thomas Roberts was very good against Bulgaria. Ulysses Llanez has been perhaps the best player on the team where he has been the key playmaker.


The U-18 #USMNT began its Vaclav Jezek Youth Tournament run with a 2-1 victory vs. UAE today. Roberto Hategan scored both ???????? goals. pic.twitter.com/dSJVsa64wO

This tournament has also marked the debut for Folarin Balogun who was the leading scorer on Arsenal’s U-18 team last year. Born in New York he is eligible for three national teams (USA, England, Nigeria) but played for England’s U-17 team at the European Championships over the summer so he would need to file a one-time switch to represent the United States in an official youth competition.

Against Bulgaria, Balogun scored his first goal in the final tally of the rout.