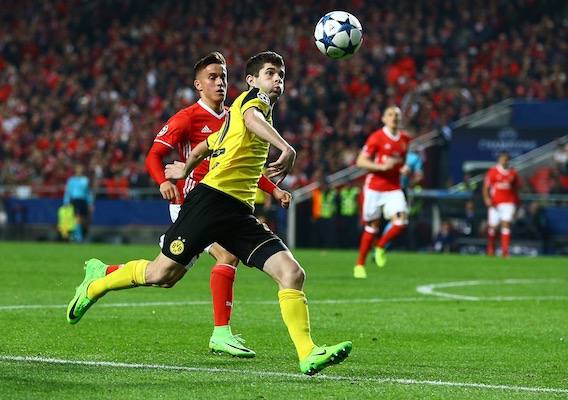 The United States under-20 men's national team made a bit of history en route to qualifying for the 2017 World Cup in South Korea. Now, the big question: Who will make the squad that represents the U.S.?
BY Brian Sciaretta Posted
March 06, 2017
6:55 PM

TWO DAYS after qualifying for the 2017 World Cup, the United States U-20 men's national team defeated Honduras, via shootout, on Sunday afternoon to claim its first-ever CONCACAF title. The victory, however, might have been costly as three starters were injured in a game where the referee once again lost control.

Head coach Tab Ramos started the same lineup that posted an impressive win over Mexico last week and his selections once again proved to be effective as the U.S. generally controlled possession. While the United States did not score in this game, it did have more chances than it had against Mexico.

The first real chance came in the ninth minute when a Brooks Lennon corner kick found Justen Glad, whose header forced a great save from Honduran keeper Javier Delgado. In the 27th minute, Delgado once again denied the U.S. with fantastic save on a Lennon free kick.

The United States lost Eryk Williamson in the first half due to an injury and Glad also had to come out.

The rest of the second half was ugly. Even though the Yanks controlled the game, the teams began to tire late and Honduras started to create some opportunities. Team captain Erik Palmer-Brown made perhaps the best defensive play of the tournament when Honduras’ Darixon Vuelto broke into the penalty area into a dangerous position. The Sporting Kansas City product denied Vuelto’s shot from ever getting to American keeper Jonathan Klinsmann.

Minutes later, Palmer-Brown was on the wrong end of another poor tackle that went without a card. With Ramos having made all of his substitutes, Palmer-Brown managed to hobble on one leg for the remaining 10 minutes. The farcical officiating continued as American forward Emmanuel Sabbi took an elbow to the head that was missed.

Fortunately for the U.S., the game skipped extra time and went straight to penalties after 90 minutes.

From the spot, the U.S. team was clinical. Lennon, Coy Craft, Emmanuel Sabbi, and Luca de la Torre each converted. Honduras was the first to miss—in the fourth round—when Rembrandt Flores lifted his shot over the bar. Then, to start the fifth round, Danny Acosta clinched the title when he converted his kick with ease.

Without a doubt, injuries to Americans overshadowed this win. The officiating was another ugly sign that CONCACAF games can be so brutal simply because the refereeing often lets the games get out of control and violent.

There was not a single card handed out in this game yet American players were on the wrong end of multiple bad tackles and elbows. The result is that two of Ramos' best players—Glad and Palmer-Brown—are injured at the start of the MLS season. (Never mind that both missed the entire preseason.) Normally players would go back to their clubs with momentum heading toward the World Cup; not this time

Even with top-notch refereeing, injuries can happen in any game. CONCACAF refs, however, lose control and create dangerous environments. Sunday’s game was inexcusable.

Palmer-Brown was on another level

As the United States celebrated, Palmer-Brown was named the Golden Ball winner as the tournament’s best player.

That decision was a no-brainer as the Sporting Kansas City product dominated every game from the No. 6 spot—despite his lack of familiarity with the position. Moving forward, his best position will continue to be central defense but his ability to play a different position shows a high level of soccer IQ.

The loan to Porto B last year proved beneficial to him and Sporting Kansas City would be wise to get him on the field as soon as possible—assuming the injury he suffered allows.

There's a good chance that even with this team winning the CONCACAF title there could be considerable turnover between this roster and the one Ramos takes to the 2017 World Cup in South Korea, set to begin May 20.

The qualifying tournament took place in the middle of the European season and European teams are reluctant to release their players for it. But with the World Cup coming after most European seasons are completed, many more players become available.

While not all players will make it, there are seven European-based players likely in the mix for the U.S. U-20 World Cup team: Cameron Carter-Vickers, Nick Taitague, Gedion Zelalem, Mukewelle Akale, Weston McKennie, Joshua Perez, and Haji Wright. Christian Pulisic is the best U-20 player available but his involvement is unlikely due to his role with the senior team. Several Yanks improved their standing, including:

Tyler Adams—One of the youngest players on the U.S. side, Adams was very effective controlling the midfield and shielding the backline.

Marlon Fossey—The Fulham product was a standout at right back and he continuously improved as the tournament went on. His stamina was on another level and in the last minute of the last game he was still going strong.

Brooks Lennon—A Liverpool academy product now on loan at Real Salt Lake, Lennon was a big part of the U.S. team’s offensive production. With both U.S. center forwards struggling, Lennon stepped up to help with production.

Cameron Carter-Vickers and Gedion Zelalem are likely candidates to play in the U-20 World Cup, and both solve problems currently confronting Ramos. Carter-Vickers will improve the central defense—although Tommy Redding and Justen Glad are both solid. Zelalem is a central midfielder who can help with possession—although the U.S. showed it can hold the ball. Even Weston McKennie, who has captained Schalke’s U-19 team, might not be needed as Adams and Palmer-Brown excelled in that area of the field.

The big problem for the U.S. was the central forward position, where Jeremy Ebobisse and Emmanuel Sabbi combined for just one goal in six games. Both players had many chances and simply could not get it done.

The result is that others could force their way into the team. Haji Wright has not seemed to be part of Ramos’ plans but he might get another look. Another option could be Atlanta’s Brandon Vasquez.

Wingers Joshua Perez and Mukwelle Akale also could make a case to be on the World Cup team. Sebastian Saucedo is a player who prefers to be in the middle of the field but Ramos sees him out wide. Jonathan Lewis was effective on the field for the U-20 team but his overall lack of playing time means that he needs to play well early in the season for New York City FC to keep his place.

Finally, left back Danny Acosta had some positive moments but also showed some vulnerabilities as he adjusts to a relatively new position (he is naturally a central midfielder). Marcello Borges was the team’s starting left back all cycle but was injured in January. If Borges returns, he could reclaim that spot.