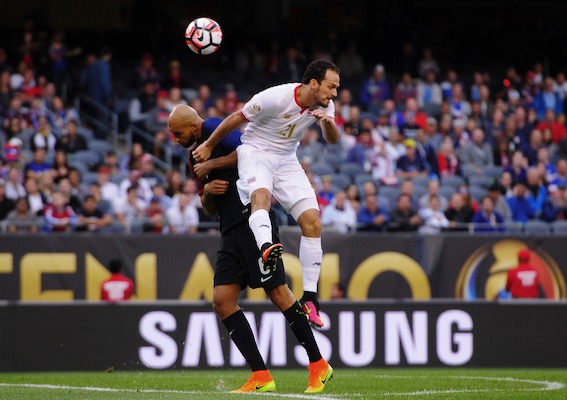 Why Are So Many MLS Clubs Signing Costa Ricans?

SOCCER CLUBS, like many businesses, try to capitalize on trends. And as the 2017 Major League Soccer season nears, a clear pattern has emerged in terms of offseason signings: Costa Ricans.

Why so many Costa Ricans, and why now?

Gavin Wilkinson, Portland’s general manager and president of soccer, said the answer is multilayered but the dominant reason is quite simple.

“I think they view themselves as an export country relative to players, so therefore [the clubs have] opened the door and allowed us to go in and watch trainings,” Wilkinson said. “We’ve actually been introduced to players by the club, and it makes it very seamless, very open, very transparent. They’re very business-like off the field, and there are some good relationships created. From that, it makes it professional—easy in many ways.”

Wilkinson made reference to Saprissa, where Guzman previously played. Before the holding midfielder put pen to paper, Wilkinson said the process was as easy as giving Saprissa’s president, Juan Carlos Rojas, a call. They inquired as to the 26-year-old’s availability, a price was agreed upon, and for Wilkinson the transaction was “honorable.”

“Without a doubt, I see Costa Rica being a country that works very closely with MLS,” Clavijo said. “The quality of the ownerships, the quality in terms of how we see that country growing and getting better, it’s there. Some generations are better than others, but I think this is a very good generation of players.”

The Ticos are currently enjoying a “golden generation” of sorts.

The national team stormed to the quarterfinal round of the 2014 World Cup, it currently sits atop the Hexagonal round of World Cup qualifying, and many of its top players are playing for notable clubs abroad. Goalkeeper Keylor Navas is with Real Madrid, strikers Joel Campbell and Bryan Ruiz both play for Sporting CP, and midfielder Celso Borges is with Deportivo La Coruña, to name just a few.

The key, Wilkinson explained, is how the advent of Targeted Allocated Money has made the Costa Rican market open in ways never quite seen before. And with international spots so precious in MLS, Clavijo said, teams are confidently investing in Costa Ricans.

“The success of Costa Rican teams in their participation in the Champions League and with MLS teams playing against them, that’s a big part of it,” Anderson said. “There’s no better way to scout players than playing directly against those players and seeing how they do in a competitive environment against your own.

“It’s a good way to measure up the talent.”

That avenue, Anderson said, is something that Vancouver hasn’t experienced firsthand yet, but scouting paid major dividends with the Whitecaps’ two Costa Ricans: center back Kendall Waston and midfielder Christian Bolaños.

Anderson said that Bolaños had been on Vancouver’s radar screen “for a number of years,” and they tried to sign him before he left for Al-Gharafa of the Qatari league in 2015. Those conversations didn’t quite pan out, but when he returned to North America, talks began again and a deal fell into place ahead of the 2016 season.

With Waston, one of Vancouver’s scouts stumbled onto the eventual 2015 MLS Best XI honoree while scouting another Saprissa player.

This phenomenon isn’t exactly new: Ticos have long been around, it’s just the density and frequency that’s spiking.

“They’ve been in the league for many, many years, almost from the beginning,” Clavijo said. “All of them have worked extremely well, so you keep going in the same direction. Now when you look at qualifying for the World Cup and at CONCACAF, Costa Rica is one of the three best countries in the region. You pay more attention than usually you do.”

Clavijo pointed to 1999, back when Mauricio Wright starred for San Jose and Roy Myers played for the New York/New Jersey MetroStars. The trend, of course, has continued well into the 21st century, with several Costa Ricans shining.

Striker Álvaro Saborío was integral to Real Salt Lake’s dominance near the turn of the decade, then there’s Ronald Matarrita, New York City FC’s current left back. It’s just that now, as salaries are increasing throughout MLS, these TAM-level players are opting to stay stateside instead of heading overseas to, say, Scandinavia.

“We’re just tapping into this market and saying, ‘If these players have value,” Wilkinson said, “can we bank it and can we also be aware of the trend and make sure this is an opportunity for MLS?”

Will this trend continue? Opinions—at least from Clavijo, Anderson, and Wilkinson—vary, but they’re all positive.

Clavijo said MLS’ growth could lead to Costa Ricans of a higher caliber entering the league. Anderson believes his Ticos are just one part of the grander equation.

“Each club has their own approach to how they’re going to populate their rosters and some clubs have chosen to go the route of the big-name DPs,” Anderson said. “We’re not going to focus on that. We’re focused on developing players … so we’re working to push those players up into our first-team environment. At the same time it’s adding key international players like Waston and Bolaños.”

Wilkinson thinks the heyday is unfolding: “I think you’re seeing the growth now, to be honest. I think you’re at the front end of it. With the addition of Targeted Allocated Money, it’s making this market affordable for MLS. It means the better players in Costa Rica are good prospects for MLS, relative to the investment.”

Regardless of the long-terms prospects, it’s clear that MLS will have a little more Costa Rican flavor in 2017.

Jonathan lives in the Boston area and covers youth, college, and professional sports for several platforms. This is his first piece for American Soccer Now and you can follow him on Twitter.