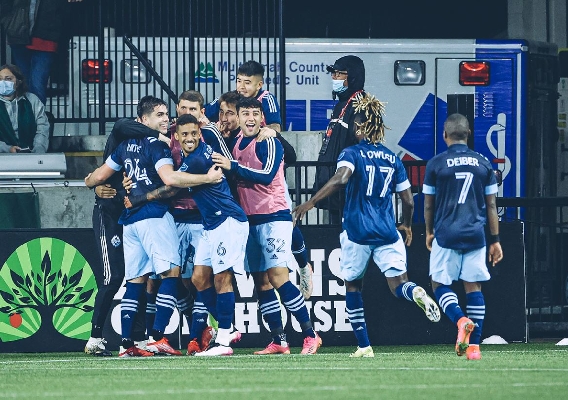 Brian White is the most in-form MLS player at the moment and he's leading a Whitecaps surge. The Union's defense is struggling while Atlanta's offense is a big concern. In the west, Colorado continues to punch above its weight. In the East, New England has all the tools - with an in-form Matt Turner. ASN's Brian Sciaretta breaks down his throughts.
BY Brian Sciaretta Posted
October 21, 2021
12:50 PM

THERE WAS A near full slate of games on Wednesday night in MLS and the playoffs are drawing closer. Some teams are making playoff pushes, others are fading, others are playing for seedings, while others are just looking forward to the season being over.

Here are some thoughts on the games.

It is understandable, that people might not be paying attention to the Vancouver Whitecaps. It has been years since the team has been relevant in the league in terms of being interesting. Even when Alphonso Davies featured for the club, the team wasn’t as interesting as the other Canadian or Cascadian.

But with anything in life, perception follows reality. The reality is that the Whitecaps are interesting but the perception isn’t there yet. This team has a “never say die” old San Jose Quakes vibe from the Lenhart days.

On Wednesday night, Brian White came into the game in the 61st minute with Vancouver down 2-0 on the road in Portland. Vancouver ended up winning 3-2 and White scored in the 75th minute to equalize the game.

White, 25, now has 11 goals on the season and has been the league’s most underrated player. Lately, however, he seems to be getting the attention he deserves.

This goal was terrific. Bruno Gaspar somehow not only got to a ball that should have gone out of bounds, he also managed to cross it into a dangerous spot. White, meanwhile, was able to generate a ton of power on a cross that was floated, and not driven.

With the big come from behind win on the road, Vancouver now crossed into the playoff positions into seventh place. For a team that has had to deal with Canadian Covid restrictions, long spells on the road, and an underdog status, the club is remarkably likable and fun to watch.

As for White, he now has a goal every 125.30 minutes of his career. How did the Red Bulls let him go for so little?

One team that is surely frustrated with its result on Wednesday night was the Philadelphia Union which could have posted an impressive win away in Minnesota. Instead, it fell 3-2 to the Loons and the loss was entirely preventable. Philadelphia should not just have gotten a result, it should have won this game fairly comfortably.

All three goals the Philadelphia Union conceded were avoidable and the first two were stunning blunders. The first was Jose Martinez trying to dribble out of the back and turning it over in a dangerous position. The second was a horrific backpass from Olivier Mbaizo that was easily intercepted by Emanuel Reynoso who moved in on goal. The third goal was a ball that should have been cleared.

It’s rare to see a Jim Curtin-coached Philadelphia team beat themselves in recent years. Tonight, they beat themselves. Winnable game for Philly, undone by a lack of focus and poor mistakes #DOOP

This is rare for a Jim Curtin coached-team so it’s easy to give the Union a pass for what has been a nice season following significant departures and a lack of designated players. Still, with allowing five poor goals in three games, turning it around is the team’s biggest challenge.

“I chalk up tonight to turnovers that I don’t think we’ll see again,” Curtin said. “That’s the hope, and we’ll try to eliminate them."

The win was important for Minnesota United to move into the playoff picture but the table remains extremely tight in the west. A draw would have put them below the line

Philadelphia will still make the playoffs, but a win in this game would have moved it into second place.

Were there concerns that U.S. national team goalkeeper Matt Turner had been struggling (relatively) lately? Sure, although he’s come up wit big saves in all of the recent games. Wednesday’s 3-2 away win over DC United, however, was a strong indication that any such slump was short-lived.

New England finished this game with 55% possession but it DC United peppered the best team in the league in this game with nine shots on target. DC United had the better chances but New England had a 3-1 lead going into stoppage time to essentially not make this one a nail-biter.

Turner made a series of huge saves in this one to essentially give his team all the opportunities it needed to score goals. DC United became frustrated and New England had the difference makers offensively – in Adam Buksa, Carles Gil, and Gustavo Bou who all scored.

Turner from all the angles. pic.twitter.com/SAlXAvQdpB

The playoffs are anyone’s game. One mistake can overturn an otherwise record-breaking season, but anyone should like New England’s chance right now. They have the players who can make special plays, they have the role players, and they have the goalkeeper.

As for DC United, it has been an improved season and the team has gradually adapted to Hernan Losada’s system. This was a game they should have won and otherwise played well. They could be a tough out in the post season.

Atlanta United’s offense has begun to sputter and it should be a concern. Yesterday Atlanta played NYCFC to a 1-1 draw at home and while Ezequiel Barco and Josef Martinez didn’t start, it should have had a better offensive output.

In this game, Atlanta didn’t put the game out of reach and left itself vulnerable to a late equalizer – which came in the form of a wonder free kick from Gudmundur Thórarinsson. Atlanta out-possessed and outshot NYCFC, but once again could not dominate despite having the ability to do so.

“Something happened after we scored our goal where suddenly everybody wants to do a little extra touch, extra dribble, extra passing, extra whatever, and that cost us tonight because in those moments where we are dominating the game, we have to make sure that we score goals,” Pineda said.

Atlanta United is still in decent shape to make the post season, but the team is playing worse now than a month ago.

As for NYCFC, it has left itself vulnerable towards being overtaken by the New York Red Bulls, who were idle on Wednesday.

It’s been a bad and disappointing season for Columbus this year but the playoffs are still a possibility and a win this weekend over the Red Bulls would go a long way towards helping their case. If the team comes up short, chances are that it will look back on Wednesday’s night’s 1-1 draw against Nashville as a reason why they didn’t qualify for the post season.

On Wednesday night, Columbus took the lead in the 75th minute via a goal from Lukas Zelarayan but held onto it for just two minutes when Hani Mukhtar equalized.

The backheel from Loba
The feed from Ríos
The finesse from ??ukhtar
The scenes from @TheBacklineSC pic.twitter.com/FujS8mlKo7

It’s all about results now for Columbus which is just three points out of the playoff places with four games remaining. It has a favorable schedule with three of the remaining four games being held at home. Also, aside from a 3-0 loss to Philadelphia, the team has generally played well over its last five games.

This was a tough setback but if Columbus keeps playing the way it has been playing, it has a good shot of qualifying for the post season. The game against the Red Bulls on Saturday is everything.

As for Nashville, 16 draws in 30 games is rather astonishing. They are a tough team to break down.

Seattle’s visit to Colorado was one of the best matchups on the evening and it was a pretty good game that finished in a 1-1 draw. It took a late goal from Cristian Roldan to cancel out a Dominique Badji opener for Colorado.

Colorado is punching above their weight and will make the playoffs while having a modest payroll relative to the league. Robin Frasier should get consideration for the coach of the year. His team is tactically smart and disciplined and that is why the team has succeeded this year.

In this game, Colorado was able to push Seattle to the brink before settling for a draw.

From a U.S. national team perspective, Roldan played a great game and brought life into Seattle’s attack with smart runs and hard-nosed play. Acosta also played well in Colorado despite filling in at fullback.

Josh Atencio looks like he could be an interesting player for the future and the young central midfielder has had a strong breakout season. One of the most improved players in the league is Austin Trusty. The Colorado defender has been a mainstay in the backline. As a big, strong, left footed defender he checks a lot of boxes for what some European teams might be after if they can meet Colorado’s asking price.

There really wasn’t much to say about Chicago’s 4-3 win over Cincinnati. It was exciting with a slew of late goals but both teams are poor and looking to next season under interim management. But the touch on former U.S. youth international Brandon Vazquez’s goal for Cincinnati was a play of beauty.