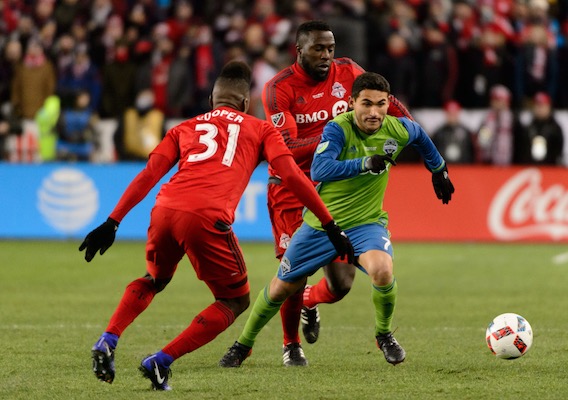 Which Players Deserve a Shot in the 2017 Gold Cup?

The U.S. stabilized its World Cup qualifying effort in March, which means that this summer's Gold Cup can involve a bit of roster experimentation. ASN Brian's Sciaretta handicaps the field for you here.
BY Brian Sciaretta Posted
April 07, 2017
3:00 PM

THE UNITED STATES MEN’S NATIONAL TEAM did what it had to do in the recent international break, securing four points from World Cup qualifiers against Honduras and Panama. It wasn’t always pretty but Bruce Arena’s team got the job done.

Still, things will have to get better as the Americans march toward Russia

The first four months of Arena’s tenure were solely focused on getting points from the March games and there really wasn’t much of an eye toward the future. The away draw against Panama qualifies as a success because five clear starters—DeAndre Yedlin, Geoff Cameron, John Brooks, Fabian Johnson, and Bobby Wood—were all injured. Several key backups were also missing and that forced Arena to play third- and fourth-string options at certain positions.

Given that, the Yanks are not in dire need of a massive overhaul. In fact, a potential first-team starting XI with everyone healthy and fit looks very strong at the moment. But Arena has made it known that if the United States’ World Cup qualifying standing improves after the June qualifiers, the Gold Cup could be used to experiment a little.

The Gold Cup won’t be a rookie camp. It’s an important tournament that has ramifications for the 2021 Confederations Cup—a tournament U.S. Soccer values. It’s also an opportunity for Arena to build some cohesion among first-choice regulars.

Assuming the June qualifiers against Trinidad & Tobago and Mexico go well, who could Arena look at to build up depth in the player pool and make a case for Russia? There are options worth exploring that could yield huge dividends.

Arena has shown time and again that he is not afraid to play young players—it was a hallmark of his first tenure as the national team coach. Landon Donovan, DaMarcus Beasley, Jonathan Spector, Bobby Convey and others all saw action in World Cup qualifiers when they were teenagers.

Looking at this summer, there are some important things to consider. Most European clubs are in preseason in July during the Gold Cup. Does Arena want to pull a young player away from his club during preseason, which is an important time to make a case for playing time to start the season? This is an important concern and some players might not play in the Gold Cup for this reason alone.

Also, the U-20 World Cup will be held from late May until early June. While not impossible, it is certainly unlike to see a young player play in both tournaments in one summer. To date, that has only been done one time for the United States when Michael Bradley (then at Heerenveen, in the Netherlands) played in both the 2007 Gold Cup and that year’s U-20 World Cup. Given that, a Gold Cup invite is unlikely for U-20 players like Cameron Carter-Vickers and Erik Palmer-Brown.

Here are some names that deserve consideration for this summer’s Gold Cup.

The FC Dallas central midfielder has seen time with the U.S. national team over the past year but former coach Jurgen Klinsmann insisted on playing Acosta at fullback—not his best position. His 15 minutes off the bench this week against Panama was his debut in central midfield for the United States.

Acosta, 21, was very good for FC Dallas in 2016 and he has been nothing short of outstanding to start 2017. The Gold Cup would be a good opportunity for him to take a bigger role on the team and see if he could push players like Jermaine Jones and Michael Bradley.

Arriola is another player who has been involved with the U.S. national team the past year but who looks ready for an expanded role. There are very few natural wingers in the U.S. player pool right now and Arriola offers a skill set that is at a premium. He has also played well for the national team whenever given the chance – even scoring twice during Klinsmann’s tenure. The Gold Cup would be a good test to see him get extended minutes.

After struggling for Premier League minutes with Bournemouth this past fall, Hyndman, 20, went on loan to Glasgow Rangers in January and has been stellar. While the level of play in Scotland has been on a sharp decline the past decade, Hyndman looks like one of the best players in the entire league. Hyndman is a creative midfielder who plays in a box-to-box role and he looks ready for a chance.

Arena said he wanted the team to improve in its passing in attacking positions and that is Hyndman’s specialty. With Sebastian Lletget on the shelf with a long-term injury, Hyndman seems like a logical choice to get a shot. A major concern will be pulling him away from his club preseason—wherever that might be after his Rangers loan expires.

After being cut from the 2015 U-20 World Cup team, Roldan has proven his skeptics wrong, establishing himself as one of the better young midfielders in Major League Soccer. In 2016 he started 34 league games, amassing more than 3,200 minutes, and helped the Seattle Sounders win the league title.

Roldan, 21, was left off the January camp roster although Arena mentioned that he wants to give the midfielder a look at some point in 2017. The Gold Cup seems like the ideal opportunity, as Roldan is eligible for both Guatemala and El Salvador—two federations that would love to have him.

Twenty-six-year-old forward Dom Dwyer became an American citizen in March, and it will be fascinating to see how, or if, the MLS veteran slots into the U.S. player pool. Dwyer has scored 51 goals over the past three seasons—an impressive output.

The U.S. strike force may appear fairly deep but it’s an injury-prone group. Jozy Altidore has missed several major tournaments (2014 World Cup, 2015 Gold Cup, 2016 Confederations Cup) with various maladies; Bobby Wood missed the March qualifiers and once lost a two-year stretch with a knee injury; Clint Dempsey is 34 and is still dealing with the after-effects of an irregular heartbeat; and Jordan Morris has endure his share of injuries.

Further down the depth chart, Aron Johannsson and Terrence Boyd have also spent a lot of time away injured. Healthier options, like Juan Agudelo and Chris Wondolowski, have never seized the moment.

Therefore it would be a mistake to say there is not a need for Dwyer or that he shouldn’t be considered as an option. The Gold Cup seems tailor-made for him.

The New Jersey native has two caps to his name but has never really been given a serious look at the senior level. Klinsmann cap-tied Miazga in a 2015 World Cup qualifier against Antigua & Barbuda and then ran him out in a friendly vs. Puerto Rico. Miazga, 21, made a splash in early 2016 when he sealed a transfer to Chelsea. But playing time was limited with the Premier League giants, and he was loaned to Dutch side Vitesse.

Miazga is now in a good rhythm, starting for Vitesse and contributing to the club’s push toward the Dutch Cup.

The Santa Cruz, Calif., native made his U.S. national team debut in November, coming off the bench in an ugly 4-0 loss to Costa Rica. While it was not an ideal time to be introduced to the international game, that brief appearance cap-tied Gooch to the United States. Earlier in the season, Gooch made his Premier League debut for Sunderland but then missed a lot of time with injuries.

A versatile player who can play forward or anywhere in the midfield, Gooch is finally healthy again but Sunderland is in the middle of another relegation fight and unlikely to give their young American many minutes. Next year Gooch will probably be playing in the English Championship – a level where he can and should play a lot. But should he miss Sunderland’s preseason for the Gold Cup? It’s a tough call.

While Walker Zimmerman has already broken into the national team and impressed Arena, Hedges has yet to do so after pulling out of January camp early due to injury. Hedges is the captain of perhaps the best team in MLS and won the 2016 MLS Defender of the Year award (after being the runner up in 2015). He has been the best American at that position over the past two years.

There are many American central defenders in the mix for the national team—including John Brooks, Omar Gonzalez, Geoff Cameron, Zimmerman, Matt Besler, Steve Birnbuam, Tim Ream, and Chad Marshall—but few things are settled other than Brooks being a starter whenever he’s healthy. Hedges has an extremely impressive resume and he deserves more than his one cap (only a few minutes in a 2016 January camp friendly at right back) because he probably can help the U.S. immediately.

That said, FC Dallas would probably object to losing both Zimmerman and Hedges for the month of July. Arena may have to choose between the two center backs.

That's what Brian thinks—now we want to hear your take. Give us some names of players who should, and should not, be included in the 2017 Gold Cup roster.