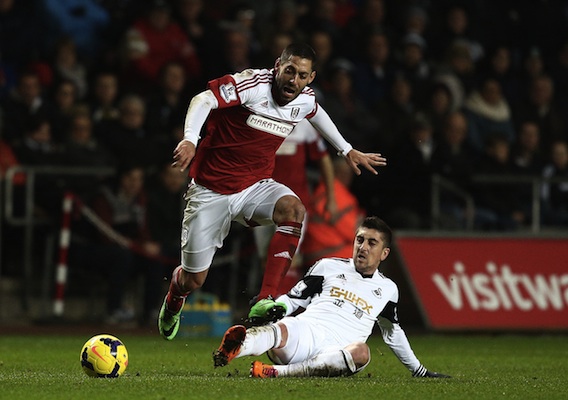 What They're Saying About U.S. Captain Clint Dempsey

During his first run at Fulham, Dempsey delivered grit and goals and became an American soccer star. He returned to the club in January for a two-month loan, and it hasn't been pretty.
BY Laura Greene Posted
February 17, 2014
12:23 PM
THOMAS WOLFE WROTE IT: You can't go home again. In Clint Dempsey’s case, those words are ringing true right about now. You know the backstory: The striker left the Premier League last summer, shocking soccer fans everywhere by signing with Major League Soccer's Seattle Sounders. Due to injuries and fitness, Dempsey did not make much of an impact in Seattle. He returned to England—and his previous employers, Fulham—in January for a two-month loan designed to help him regain fitness and find the momentum he seemed to lose when he relocated to the Pacific Northwest. At least, that was the idea. United States men's national team coach Jurgen Klinsmann loved the idea of the move, and in October 2013 he named Dempsey—along with international teammates Landon Donovan and Graham Zusi—as players who should look overseas during the MLS offseason. “Our priorities are set so that the first one is if you get a chance to go on loan to Europe, do it. It is very crucial for us that the players understand that everything they do now today has an influence on Brazil 2014 next summer. They can't take it easy.” Donovan and Zusi did not go abroad; Dempsey did. But it’s fair to say that things have not worked out as the U.S. captain might have hoped. In order to tell the full story let’s take things back, for a moment, to Dempsey’s first stint in England. AFTER JOINING FULHAM IN 2007 from New England Revolution, Dempsey spent five-and-a-half seasons at Craven Cottage before signing for Spurs in August 2012. In that time, he was a resounding success. In 2008-09 Fulham finished the season in seventh, its highest-ever league standing. In 2009-10, Dempsey played a huge part in guiding Fulham to the Europa League Final against Atletico Madrid, where it fell just short. Dempsey was also voted the club’s Player of the Year for two successive campaigns (2010-11, 2011-12). By the time he left the club, the Nacogdoches, Texas, native had scored 60 goals for the Cottagers. 50 of those strikes came in the Premier League, which made him the highest-scoring American in the competition’s history. He was much loved by the Fulham supporters, yet Dempsey’s departure left a bitter taste in the mouths of the club’s fans. As the Guardian’s David Hytner wrote in December 2013: “Dempsey left Fulham for Tottenham in August of last year under acrimonious circumstances. He had been pursued by Liverpool and he made it plain that he no longer wanted to play for Fulham. Tottenham nipped in to take him for £6m on transfer deadline day and they trebled his wages.” Dempsey lasted one season at White Hart Lane, where he scored seven top-flight goals for the side, then managed by Andre Villas-Boas. It wasn’t long before his move back to the U.S. with Seattle Sounders was made official on August 4, 2013. Dempsey struggled to make an impact at CenturyLink Field where, upon returning to his homeland, he could only find the back of the net once—a calf injury limiting his time on the pitch to just nine games.

When rumors started circulating about a potential return to Fulham, which was bought by Jacksonville Jaguars’ owner Shahid Khan in July 2013, some of the club’s fans were less than impressed. “I hope it doesn't happen,” said FFCcravencottage on club messageboard Viva El Fulham on December 16, 2013. “I'm sure Khan would be pleased to have an American playing for Fulham. I'm not saying that if he did come back that I wouldn't want him to do well, because I obviously put Fulham above my dislike of Dempsey.”

Northernwhite replied, “If it was for the rest of the season, I could potentially see the benefits but he'll be here for a maximum of 2 months and will not have had a full pre-season… Not overly excited about his return for only 6-8 games maximum, most of which he won't be match fit.” Others were a little more understanding. On Friendsoffulham.com, contributor Cmg wrote on December 20, “Personally, as someone who has made a mistake or two in life, I will be happy to forgive the seemingly impolite departure of a player who did a great deal for this club over a five year period.” RaySmith added, “All people should be concerned with is—will Dempsey give his all during games? Which, as far as I'm concerned, he always has done.” Shortly before Dempsey’s loan move was confirmed in December, then-manager Rene Meulensteen reacted to the rumors on the club’s official website: “It would be a real boost for us. Hopefully that will all work out," he said. "Clint spent so many years playing in the Premier League and we all know where his strengths are. He can come in from the left or play as a second striker depending on who you’re playing against. It speaks volumes for him that he wants to come back here. Initially it’s for January and February.” When the switch was made official, Dempsey spoke about “coming home” to Fulhamfc.com: Ineligible to make an appearance for the side until the winter transfer window was officially opened on January 1, many were surprised to see Dempsey omitted from the Cottager’s matchday squad to face West Ham on New Year’s Day.

Clint Dempsey return to Fulham will have to wait. He's not in the 18 today vs. West Ham

The 30-year-old did finally get on the pitch on January 11, albeit in less-than-fortunate circumstances, as Fulham was trounced 4-1 by Sunderland on home turf. Two days later, in the Daily Star, Meulensteen backed Dempsey to find form: “Clint’s a fit boy and that comes pretty quickly. The more minutes and games he gets under his belt the quicker that will all come. It won’t take long for him to be right back up there.” In Fulham’s next league outing, a 2-0 defeat against Arsenal on January 18, Dempsey completed 90 minutes, yet received little praise.

Clint Dempsey somehow uninvolved with both offense and defense today for @FulhamFC. No edge, little desire. In form or not, this is vexing

@AlexiLalas He was lazy. Looked like he was on holiday. Only thing missing from his game was a deckchair.

Two more Premier League defeats followed, against Swansea and Southampton, in which Fulham was outscored 5-0. On January 28, following the Swansea loss, Kyle Bonn wrote on prosoccertalk.nbcsports.com: “The scariest part of it all is that the Texas native moves around the pitch like he’s running underwater. He has no drive, no pace, and no confidence.” After a run of four games without a win and with Fulham rooted to the bottom of the table, Dempsey tried to remain upbeat, telling USAToday: “It's been tough, but also it's been good for me, trying to get back to fitness and feeling good, coming off an injury toward the end of the season with the national team. It's good to get some games, some minutes over here, but unfortunately the results haven't been going our way. But I've still got a month left and hopefully we can start getting some points.” For Fulham’s next game, away to Manchester United on February 9, Dempsey did not even make the bench. Fulham won a hard-earned point n that contest.

The next tie, against Liverpool at Craven Cottage on February 12, a Dempsey-less Fulham put up its fiercest fight yet, almost doing enough to draw the game, before losing out to a penalty awarded in injury time. Is it a coincidence that, with Dempsey in the squad Fulham struggle whereas without him, the players seem up for the fight? Following the Liverpool loss, these Fulham fans did not mince their words on Friendsoffulham.net: “Clint hasn't become any type of scapegoat, he's just been absolute utter tosh since returning to Fulham, and a shadow of his former self. No disrespect to the guy, I appreciate every thing he's done for Fulham, but he won't be helping us out this time around, that I can assure you of,” typed Admin on February 12. “I really can't understand why we took him in the first place,” added The Equalizer. “It was a two-month loan of a player who wasn't match fit at the time. Totally pointless, and he's more than proved that with his lack of effort on the pitch.” On Valentine’s Day, things took a turn for the worse when it was announced that Fulham’s manager had been sacked after just 75 days in the job and swiftly replaced by former Bayern Munich, Wolfsburg, and Schalke boss Felix Magath. Confusion then set in when conflicting reports came out of Craven Cottage, suggesting that Meulensteen had not been fired but simply “replaced.” It brings back memories of what happened when Meulensteen himself took over from Martin Jol on December 1, having first been brought in as his assistant.

Clint Dempsey might have been better off in Klinsmann's January camp than the circus he seems to have wandered into at Fulham.

It’s hard to predict whether Magath, famous for being a hard-line disciplinarian, will have any time for Dempsey—whose loan spell ends at the end of the month. Yet Sounders coach Sigi Schmid had this to say in a MLSsoccer.com article posted on February 15: “No, it doesn't affect it [the loan] at all. You don't know how Felix Magath is going to approach it in this period of time right now with the team.” In the comments section below the piece, however, others saw it differently: Portlandpadre wrote, “Fulham has one game left the rest of the loan period. He hasn't made 18 in last two. No reason not to come home, unless he doesn't' feel like coming back.” Ricardo Salazar added, “Given his form over the last few months, I doubt that he'd be very critical for the season opener. Hype fizzles fast when you cant back it up.” And, as ClayC1969 put it bluntly, “I strongly suspect that Magath's first question for Deuce will be if he wants an aisle or window on his way back to Seattle.” Seattle Sounders 2014 MLS Season will kick off on March 8, with a home tie against Sporting Kansas City. This is Laura Greene's fourth On the Record piece for ASN. Share your thoughts on Dempsey's return to London below.