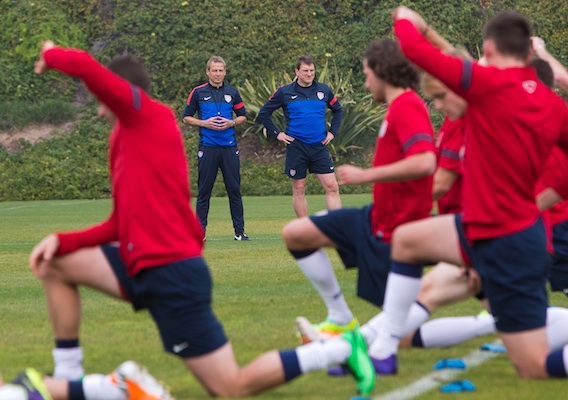 What Jurgen Klinsmann Said, and What We Heard

On the pressure to make the World Cup

What Jurgen Klinsmann Said: “Everyone knows the clock is ticking and that they need to impress in those games with their club, and the only way you can impress is if you play from the beginning on. So the players have a sense of urgency now. With whomever I communicate, whether it’s a text message or on the phone, I hear from the players that know they have to step it up. We have players who shoot us an email or a text real quick asking if there’s something additional they can do, which they should. We give them the input right away.” What We Heard: "If you're playing in North America and your first name isn't "Joe," "Edgar," or "Herculez," you can go ahead and book that summer trip to the Seychelles. These are my guys."

On expectations for this group

What Klinsmann Said: “What we expect is that they show a really strong performance against a Mexican team that is now basically coming back on track. They went the difficult route against New Zealand to qualify as the fourth-place team in CONCACAF. They got their lessons in 2013, very harsh lessons that they had, many coaching changes, and now they want to get back on track. There’s nothing better than doing that against their main rival the United States. So we really have to be on our toes. We’ll make sure everybody is on board, and they’ll have a point to prove because we are only a couple weeks away from deciding on the 23 guys that go to Brazil.”

CREATE YOUR OWN U.S. STARTING XI FOR MEXICO MATCH What We Heard: "Brad Evans is going to get 45 minutes to show me he is a viable option at right back. If he can't, he's out. Michael Parkhurst is in the exact same position. Omar looks like he's sleepwalking out there for L.A. He needs to step it up—otherwise, he might be watching from the sidelines as Clarence starts against Ghana. Maurice needs to show he is ready to dominate in the midfield. He has fallen behind a lot of guys, and it's going to take something special for him to reclaim his spot. Chris—he needs to score two goals per game, every game, between now and May."

On the challenge facing his players

On Michael Bradley's return to the team

What Klinsmann Said: “It’s just great seeing Michael Bradley there on the field showing everybody how good of a player he is. He had to be stitched up a bit after that clash, but he had a good performance. It’s very important to us that our leaders in our group are really getting a rhythm and getting games in. Seeing Michael back on the field and the others as well is really important.” What We Heard: "Don't get me started. He should have been in Cyprus with the rest of us."

What Klinsmann Said: "All of our three MLS teams lost against Mexican opponents. That was a big bummer for us and gives us a lot of questions to be answered on how can we avoid that next time." What We Heard: "My top guys are abandoning Europe to play in MLS and the league can't get past Tijuana and Cruz A-Fricking-Zul? Last year I had guys playing for Schalke and Tottenham and Roma. What the hell happened? I think I'm going to take the helicopter out for a spin just to clear my head. Catalina maybe. Or Borrego Springs."

On Julian Green's one-time switch to join the U.S.

What Klinsmann Said: “Julian is very ambitious. He knows about his qualities. He knows about the club where he trains every day with Arjen Robben, with Franck Ribery, with big players who are on the big stage for a long period of time. I think he has the confidence to come in and say, ‘If the coach gives me the chance to play there, I want to show him that I want to go to Brazil.’” What We Heard: "I've got 8-10 guys who should be playing in top European leagues and they choose to play in MLS instead. I don't get it. Julian may just be a kid, but he is a Champions League player and he plays for Bayern Munich. He'll be in Sao Paolo, even if it's just to send a message to the rest of the guys. Don't settle! Ever! "

On Maurice Edu's return to the national team

“We’re looking for Mo to show us that sense of urgency. We’re looking forward to having Mo back with us because once he’s in a rhythm, once he is fit and really zoomed in, then he’s a very good player.” What We Heard: "Mo needs to have the game of his life against Mexico. It's up to him." That's what John Godfrey heard. What did you hear? Tell us below.