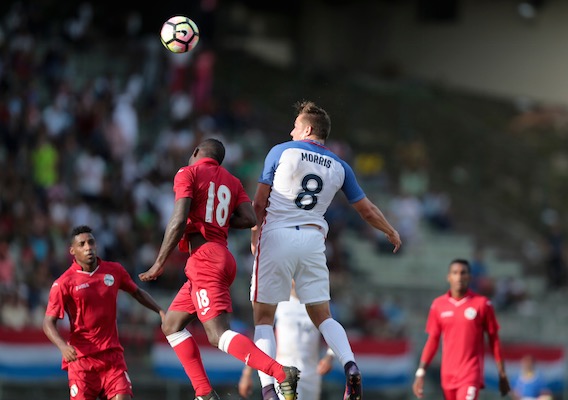 What Can the U.S. Learn From Cuba Win? Not Much

Chris Wondolowski and Julian Green scored second-half goals to give the Yanks a 2-0 win over Cuba, but poor playing conditions made for a dull match that likely didn't help Jurgen Klinsmann much.
BY Brian Sciaretta Posted
October 08, 2016
6:30 AM

IN A GAME that required some luck and little skill, the United States defeated Cuba 2-0 in Havana in the first of two October friendlies. In what was a brutal game to watch, it is a stretch to say anything significantly was gained out of the game. The ball didn’t roll in a straight line and dribbling, let alone passing, was pointless.

This game was emblematic of all that is wrong in CONCACAF in that a team can be allowed to play in such an awful field (absent any weather concerns) and talent is neutralized. It’s a stretch to come up with real talking points from the game but here are my thoughts.

There was a moment when Christian Pulisic had the ball in the first half and with no one around him, took one dribble and it rolled out of bounds for a turnover. Pulisic has played in CONCACAF road games before at the youth levels but this was a good reminder for him and other talented young American players like Lynden Gooch, John Brooks, and Julian Green that in this area of the world, conditions beyond your control are not going to allow you to play soccer the way you play it every day in Germany and England. Sometimes, a basic dribble can be complicated.

The United States still has to fight its way through games like these and Cuba was flat out unlucky not to score on multiple occasions—hitting the post twice. If this was a World Cup qualifier, that would have been a major problem but at times it seemed as if American players were primarily concerned with not getting injured.

It is also too bad too that Cuba is such a poor opponent. You have to wonder where their program would be if it wasn’t hit with waves of defections every time it plays road games. Heck, even Ozzie Alonso could have made a difference today.

Julian Green was easily the best American player Friday, scoring the finale and setting up the opener with a hard shot that resulted in a rebound that fell right to Chris Wondolowski. Even beyond those plays, he was always looking to be creative and aggressive.

The good news for Green is that this performance keeps is name in the conversation with the national team. It reminds people of why he was such a big prospect three years ago in Germany before his awful loan to Hamburg.

The bad news, however, is that Green is still not playing for Bayern Munich and likely will not play much, if at all, as long as he is there. The bottom line is that young players need to play and that sitting on the bench does not help them develop. Training with a top-caliber team like Bayern has its benefits but those are limited and there is no substitute for meaningful minutes. Green might still have a nice upside, but if he’s not playing, you don’t know what you’re going to get from him.

Klinsmann has defended his frequent call-ups of Wondolowski and nothing the forward does in friendlies will quell the criticism he receives. But it was nice to see the San Jose Earthquakes forward focused and contributing in the win over Cuba with a goal and an assist. U.S. fans should consider that if Klinsmann is going to call-up Wondolowski, it is beneficial to see the forward in good form and confident.

When he came on in the second half, it was the right opportunity in a game where close finishing was likely going to decide the game. His opening goal was typical Wondolowski but his pass to assist on Green’s goal was outstanding as he did not have a lot of margin for error connect with Green. It also came off a well-timed run and a nice lofted pass from Timothy Chandler.

U.S. gave away too much space

The United States did not dominate this game and in the second half Cuba had multiple good chances to score. The U.S. often gave away too much space in the midfield or on the flanks. In particular, Fabian Johnson had a bad game. Offensively he did little and defensively he allowed Cuban attackers to get behind him.

Cuba came very close to scoring but against most other teams the U.S. likely would have conceded at least one but probably two goals. Cuba is not a good team and it struggles mightily to score. Field conditions aside, the near-misses from Cuba probably left the U.S. with an uneasy feeling as it returns to the States to take on New Zealand on Tuesday in Washington, D.C.