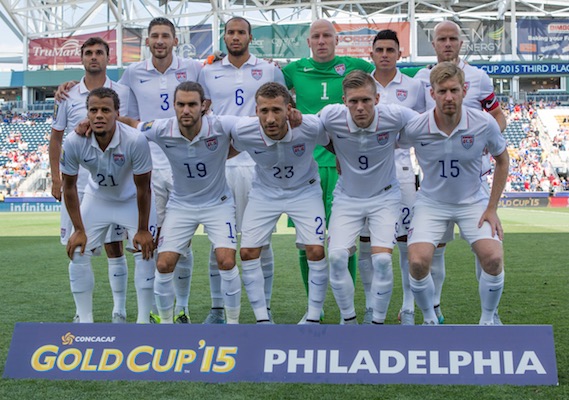 Nobody wants to be in a third-place game—especially not a team favored to win the championship. ASN's Brooke Tunstall spoke with several American players after yesterday's loss to Panama.
BY Brooke Tunstall Posted
July 26, 2015
11:00 AM

CHESTER, Pa.—While Jurgen Kllinsmann was giving his post-game press conference at PPL Park, the Panamanian players could be heard celebrating their penalty kick victory following a tie game in the consolation match of the CONCACAF Gold Cup.

Later, when the Panamanian players exited the mixed zone, happily taking questions from the Spanish-speaking media, bronze medals hanging from their necks, the few U.S. players who would address the English-speaking media seemed to take the United States national team’s worst showing at a Gold Cup in 15 years in stride, brushing aside the disappointment.

Perhaps because neither team really wanted to be playing in the consolation game in the first place, few from the U.S. team seemed bothered by the result, even if meant leaving emptyhanded.

“This game today had a weird feeling for both sides,” Klinsmann said. “We wanted to just to make sure nothing bad really happens there and let’s just get it done. I’m not blaming any players if mistakes were made.”

Most American players opted not to talk to the media in the mixed zone, including defender John Brooks, whose miserable tournament continued Saturday when he was outmaneuvered by Panama’s Roberto Nurse in the 55th minute to put the U.S. in a 1-0 hole. A year ago, after scoring the game-winning goal against Ghana in the World Cup, Brooks eagerly entertained the reporters awaiting him post-game in Natal but he refused to speak to the press during this tournament as he made gaffe upon gaffe.

Brooks would do well to learn from teammates like Ventura Alvarado, who after poor games earlier in the tournament didn’t duck reporters’ questions, or veteran teammates like Brad Guzan and DaMarcus Beasley, who struggled in peanlty kicks.

With the U.S. being again outshot—it had the fewest shots of any team, including a Canada side that didn’t score a goal in the group stage—Guzan made nine saves during the run of play and another in the shootout.

“I think it was obviously a weird atmosphere for everybody,” Guzan said. “I’m not taking anything away from [Panama] because they won the game and that’s what it’s about. I don’t think it’s our best performance by any means.”

BEASLEY OPEN FOR A RETURN

Beasley came out of international retirement to play in this Gold Cup and leading up to the Panama game U.S. Soccer indicated today’s match, which he entered at the start of extra time, would be his last.

"I said right after the game in the locker room, I said, 'Beas, I don't know if you can walk out like that. We might have to get you back in,'” Klinsmann said. "And the guys were clapping, because they love him—the locker room loves him."

"I am not going to say I'm retired again," Beasley said. "I'm sure I'll speak to Jurgen and see what he's thinking for the future. But it depends on how I'm playing. I don't feel old, I feel fit, I feel ready to play. So if Jurgen wants to give me a call again, that's a conversation we'll have."

Klinsmann said that Beasley will make the call.

"It depends on him. He made that decision a year ago, he came back for the team," Klinsmann said. "The plan was for the knockout stage. It didn't work out because of the strain but from my end I'm always open."

For the first time in a national team career that began in 2006, Guzan came into the Gold Cup as the No. 1 U.S. goalkeeper. Other than a shaky few minutes against Jamaica he played well and probably had his best game against Panama.

Tim Howard, the Everton goalkeeper who had been the U.S. No. 1 since 2007, took the past year off from international play following last summer’s World Cup but indicated recently he plans to return to the national team.

Guzan welcomes the challenge for the No. 1 spot.

"I’m hopefully coming into the best years of my life in terms of goalkeeping," Guzan said. "I feel ready. I feel confident. I’m excited about the future. I’m sure (Klinsmann will) make a decision one way or another.

"We’re friends of course but we’re competitive. We both want to play. That’s not a secret. It’s plain and simple. You don’t become a professional by wanting to become a No. 2.”

Klinsmann refused to say what Howard’s role with the team will be going forward and praised Guzan.

“I will have a phone call with Tim, probably next week, and also with Brad, and see how we want to move forward,” Klinsmann said. “Brad kept us in the game with a couple of tremendous saves. We allowed defensively too many chances. There’s no doubt about it.”

Despite no longer playing in Major League Soccer, De Andre Yedlin is leaving Philadelphia for the MLS All-Star game this week, where his club team, Tottenham Hotspur, is playing an all-MLS roster.

“It will be fun and I’m looking forward to it,” said Yedlin, who assisted on the Clint Dempsey's 70th minute goal Saturday.

Yedlin played limited minutes for Spurs after joining the team in January and will have to have a strong preseason to earn more playing time. “I don’t know what they want my role to be but I’ll go in there and give it my best and hopefully do well.”

Yedlin and Brooks are the only two U-23 eligible players on the Gold Cup roster, meaning both are age-eligible for the 2016 Olympics. CONCACAF’s Olympic qualifying tournament begins in early October and will conflict with the senior national team’s playoff for a spot in the 2017 Confederations Cup on Oct. 9.

Yedlin said he had no preference which competition he plays in. “Wherever they need me.”

In international soccer, the next event is always around the corner. So on the same day the Americans ended their participation in the Gold Cu they learned its opponents in the semifinal round of CONCACAF World Cup qualifying, which begins in November.

The U.S. was drawn into a group featuring Trinidad & Tobago, which won Group C at this year’s Gold Cup before falling to Panama in penalties in the quarterfinals. The Soca Warriors made the 2006 World Cup but didn’t advance to the final round of World Cup qualifying four years ago.

The U.S. will also face the winner of play-ins between Guatemala and Antigua & Barbuda, as well as amatch between Aruba and St. Vincent & The Grenadines.

The U.S. will play each team in its group, home and away, with the top two teams from three semifinals will advance to the final hexagonal round that will determine CONCACAF’s entrants in the 2018 World Cup. The dates of the ties are Nov. 13 and 17; March 25 and 29, 2016; and Sept. 2 and 6, 2016. Matchups and locations will not be determined till after the third round play-in games.