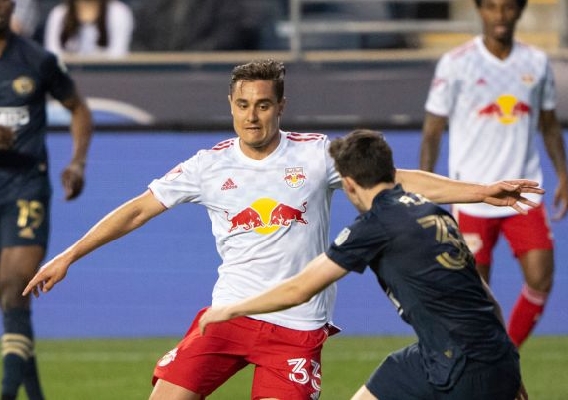 ASN's Brian Sciaretta offers up his observations from MLS week 5 including Seattle's dominance, Philadelphia's improvement, questions for the Revs, Dallas, Columbus, and Minnesota, plus the sad news of Aaron Long's injury.
BY Brian Sciaretta Posted
May 17, 2021
1:05 PM

THE FIFTH WEEK OF the MLS season didn’t have as many good games or goalazos that the season’s first few weeks had, but this weekend was just as revealing in terms of where teams and players stand.

For one, Minnesota still isn’t playing that great, but the luck is going their way. The FC Dallas attack isn’t great. LA Galaxy seems like they are for real. New England and Orlando can grind out wins.

Finally, we can all safely assume that as of right now, Cincinnati is the worst team in the league and Seattle is the best.

Here were my observations.

Minnesota and Dallas both need work

Minnesota won its second game in a row on Saturday night. That is a really nice turnaround after dropping the first four games of the season.

Despite the win, Minnesota still is a very long way from where it should be as a team. In the 1-0 win over Dallas, the team outshot Dallas 27-6 and had 15 shots inside the box and 12 outside the box. A few weeks ago while losing, the problem with Minnesota is that their attackers couldn’t beat anyone on the dribble. It looks like they recognized that problem and have decided to shoot more, dribble less.

That was pretty revealing, and a cause of concern for both teams. For Minnesota, it is playing very direct right now and is getting forward as quickly as possible and either getting off shots or crosses. 15 shots in the box and 23 crosses and scoring just once isn’t great.

For Dallas, 135 completed passes in the attacking half while having 55% possession shows that the team really struggles to get the ball forward. That’s on the midfield and it’s also on the attackers getting into dangerous areas. Jader Obrian, Andres Ricaurte, and Franco Jara need to be better.

Minnesota is playing better and they have enough talent to occasionally make moments of magic. In this game, it was a 90th minute goal from Robin Lod on a broken play in the box. The team is still obviously frustrated and not playing the way it is capable of. Still, good streaks can start with just a little bit of momentum and confidence.

It was going to be an interesting game when Philadelphia hosted the Red Bulls on Saturday night. These are two teams in a transitional period.

Philadelphia ended up walking away with a deserved 1-0 win. They were the better team and they prevailed by winning the midfield battle.

For the Red Bulls, the loss appeared not to be that bad as the substitutes all showed to be really promising: Patryck Klimala was electric off the bench. Cameron Harper has a role (and his lack of starting is due to the fact the team really doesn’t play with wingers) and he looked dangerous as well. Dru Yearwood picked up a dumb red card late in the game but, prior to that, was also promising off the bench.

It appeared to be a loss that was disappointing but also showed promise for manager Gerhard Struber in that perhaps there were other options he could use to push his starters. In this game, Caden Clark and Frankie Amaya weren’t as good as they were the previous two weeks. Set piece deliveries were disappointing and never were dangerous. The subs completely turned the game around.

Great finish from Burke and a lovely through-ball from Monteiro. #DOOP
pic.twitter.com/JoEglIkXNl

Any sense of a silver lining was ruined late in stoppage time when Aaron Long suffered what appears to be a very serious injury related to his Achilles tendon. That would be an enormous setback for the Red Bulls and a set back to the United States national team as well. Long is one of the most mobile central defenders in the league and he relies heavily on his speed. He was also playing well the past three weeks and his absence would be a huge blow to the Red Bulls. It would also be a massive set back to Long personally as he had hopes of getting sold, perhaps this summer.

For the national team, Long’s injury comes at a time when there are so many questions involving other central defenders – Chris Richards is injured, Mark McKenzie lacks consistent minutes, Tim Ream isn’t playing. An injury to John Brooks or Matt Miazga could leave the team very shorthanded at the moment.

For Philadelphia, the performance was solid and showed that the team can grind out results. Alejandro Bedoa and Leon Flach continued their strong start to the season. Anthony Fontana was still effective despite not scoring – it was important to see him be able to contribute in other ways. Jamiro Monteiro was still able to make magic at enough moments to be the difference maker.

Philadelphia is growing into life beyond Aaronson and McKenzie. This was a tough test and they passed it.

They might not be the best team in the league, but the Galaxy are by far the most improved. A heavily motivated Chicharito and the addition of Greg Vanney as head coach has done wonders. On Saturday, the Galaxy downed Austin FC 2-0 and it was won on making few mistakes and having more players who can be difference makers – like Chicharito and Lletget.

In a lot of metrics, Austin FC had the edge. But the Galaxy allowed their talent to do the work. They had 13 successful dribbles to only four for Austin FC. They won more duels 44-36. They had a narrow shot advantage 16-15 but had a bigger edge 13-8 in terms of shots inside the box.

Austin FC is actually playing well for an expansion team. This is a group with no history of playing together and the system is still developing. The Galaxy were a failed system of underperforming players the past two seasons. They are only going to improve as the system matures. For now, however, they are at least putting players in a position to individually make plays happen – and that is good enough right now.

The New England Revolution defeated the Columbus Crew 1-0 on Sunday. With the result, Columbus has been shutout in four of the five games this season.

This game was especially poor for Columbus who was without Lucas Zalarayan due to a minor injury. But without their star midfielder, Columbus managed just one shot on goal and one off the post. Even without Zelarayan, Columbus is not performing up to the sum of its parts as Gyasi Zardes, Pedro Santos, Derrick Etienne Jr. and Luis Diaz have all yet to score a goal or notch an assist on this game.

The problem for the Crew right now is they need more dynamic play from their wings – either cutting inside to shoot or to stay out wide and cross.

"A lot of our goals come from crosses, but a lot of teams know that now,” said Zardes. “A lot of teams are trying to take away our opportunity of crossing so we just have to find alternative ways to score or get into positions to even take shots. I think it's going to come."

The Crew are the defending champions and all the teams are aiming to bring their best effort against them. It is true that the team is dealing with a bunch of injuries and they will probably be okay, but the team still should be performing better than it has been.

As for the New England Revolution, they’re the best team in the Eastern Conference right now because they don’t really have a weakness at the moment. Carles Gil is having a Best XI start to the season. The Adam Buska goal was important for him personally and he did well coming off the bench. The problem is that over the last five games, the Revs have scored more than one goal just once. To contend for the Eastern Conference, there needs to be more offensive production – that requires more than just Buska getting hot.

The Atlanta – Montreal game was dull for 90 minutes but then Marcelino Moreno headed home a goal deep into stoppage time for a 1-0 Atlanta win. Played in front of the largest crowd in the world since the start of the pandemic – that’s just a great story.

Marcelino Moreno wins it in front of 40,116 fans at Atlanta United ????pic.twitter.com/QSXQtUm2Tb

For Atlanta, the team is still a long way from where it could be and its attack is still not producing, but the team is playing with more energy and heart than under Frank de Boer. They’re on the right track, but it remains to be seen how fast they are truly moving.

Seattle is the league’s best

The Seattle Sounders dispatched LAFC 2-0 on Sunday. What it comes down to right now is that Seattle has a culture of winning. It is so deep rooted into the team that when there is a newcomer, they become immersed in it quickly and become part of it. This team doesn’t know how to lose. Nicholas Lodeiro and  Stefan Frei did not play in this game. Jordan Morris has and won’t play this season.

Brian Schmetzer has overseen this from the get go and it is just remarkable to watch this team continue to win. Sure, the team spends money, but so does Cincinnati. But this is what good coaching, a good front office, and a good overall organization gets you – the Seattle Sounders. These types of cultures always start from the top.

As for LAFC, no it is not time to hit the panic button but they’re entering in a stretch where they are going to be hosting the next four games. They have to walk away from this with nine points to be a contender in the West.

Two American players who were exceptional over the weekend were Portland’s Eryk Williamson and Sporting Kansas City’s Gianluca Busio.

For Williamson, he played more of a No. 6 role in a 2-0 win over San Jose and registered two assists.

Congrats to @erykw19 on his selection to the @MLS Team of the Week! #RepDMV

As for Busio, he was strong for Sporting Kansas City in a 3-0 win over Vancouver.

If either of these players were on the U.S. U-23 team, it would have had a much better chance of qualifying for the Olympics. The team needed more attacking midfielders and there were plenty that were available.