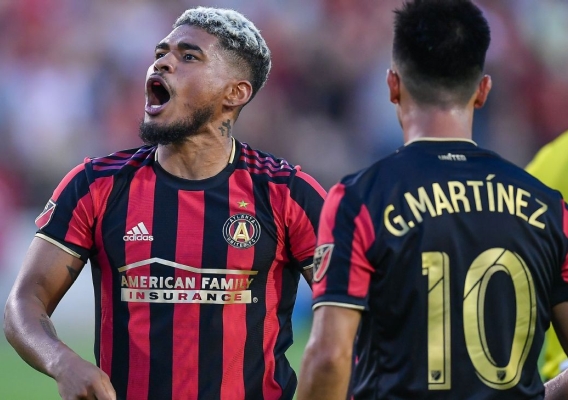 Week 22 leaves everything up for grabs in chaotic MLS action

We know the bad teams in East and we know LAFC is tops in the West, everything else makes no sense. ASN's Brian Sciaretta breaks it down
BY Brian Sciaretta Posted
August 05, 2019
7:00 AM
WEEK 22 of the 2019 MLS season is now in the history books and there is a lot known and a lot unknown about where things are headed.

For one, we know that in the Eastern Conference Chicago, Cincinnati, Orlando, and Columbus are not likely to make the playoffs. So that means that there are essentially eight teams fighting for seven playoff spots. And all eight of those teams have had a period where they look terrible.

Right now, Montreal looks the worst of those eight but before this weekend, Philadelphia had two disastrous 4-0 losses in their previous three games. This weekend, they beat DC United 5-1 at Audi Field. So this stuff is impossible to predict and just a modest run will see fortunes skyrocket.

In the West, we know that Los Angeles FC is the best team in the league by a long, long way. Everything else is a toss-up. You think that Vancouver, Colorado, and Sporting Kansas City are the worst three in the conference. That is actually correct when looking at the standings. But each of those teams won (Colorado and Sporting were impressive in their wins while Vancouver got past a poor Cincinnati team).

For both conferences, it’s going to come down to whoever is hot in the end – with most teams having between 9-11 games remaining. New York City has 13 games remaining which might actually hurt them with such a condensed schedule compared with everyone else.

So here are some trend lines.

Atlanta and Galaxy were revealing


I was in attendance for the Atlanta – Galaxy game at Mercedes-Benz Stadium. This game revealed a lot. It seems like only yesterday Zlatan had his famous hat trick against LAFC in a game that drew international headlines. But since Zlatan’s last goal of that hat trick, opposing teams are outscoring the Galaxy 8-0.

As has been said, Zlatan felt extra motivated in the LAFC game after a weeklong bout of trash talking and a matchup against a cross-town rival which was also the best team in the league. The team fed off that spark. But that is now ancient history and the Galaxy are simply being pummeled.

The away matchups against Portland and now Atlanta were one-sided. Atlanta made a few defensive mistakes that gave the Galaxy chances in the first half, but once those were straightened out, the Galaxy were steamrolled. This is beginning to look like the team that missed the playoffs last season. When Zlatan isn’t there to save them, like he wasn’t against Atlanta due to a suspension, it is ugly.

Without even getting into tactics or specifics, a big chunk of this roster needs to go.

As for Atlanta, it was one of its best performances of the year. Ezequiel Barco looked like the expensive important he was and Pity Martinez was especially effective making plays, even if his shot was off.

Miles Robinson meanwhile was outstanding in central defense and Frank de Boer was raving about him after the game. He looks like a very capable player for the U.S. U-23 team moving forward.

For Atlanta, it’s now about consistency. And perhaps the fiasco of the all-star game where the players were publicly critical of de Boer and de Boer expressed frustration will have a way of galvanizing everyone. If Atlanta can finish in first this season, Mercedes Benz Stadium is a huge asset under the new playoff format that it is entirely likely the team returns to MLS Cup.


The Red Bulls are a tough team to figure out. The team either looks poor and losses, or finds a way to scrape a win. The team never dominates and looks in command, but the team can get wins.

Two games ago, the Red Bulls were outplayed by Orlando but still won thanks to Luis Robles and spectacularly poor finishing from Orlando. Then last weekend, the team lost to Columbus at home on pretty poor defending.

Against Toronto, the Red Bulls were once again poor in possession and finishing in the first half. In the second half, the team was better but still not great. The backline did what it should do with players like Aaron Long, Tim Parker, and Kemar Lawrence. When those players are in-form, the team can deal with poor outings from Daniel Royer, Sean Davis, and others.


This save from Luís Robles pic.twitter.com/H8YWIpzW3k

But with the Red Bulls, when is this team going to take a game over in the manner it can?

As for Toronto, there is very little on this team that is dangerous beyond Alejandro Pozuelo and Jozy Altidore. Teams focus in on both of those players and if they don’t score, it’s over.

NYCFC struggle on the road

But NYCFC showed serious flaws in this game and its schedule down the stretch is not as favorable as it sounds. Yes, it has games in hand, but the condensed schedule will test its depth and it remains to be seen if the team has the depth to play well in a regular two-games per week interval.

Meanwhile, for RSL, Jefferson Savarino is one of the best players in the league. If the team can keep him, they’re in good shape. But RSL always enjoys a very nice home field advantage and teams struggle with the altitude. Next week is key for RSL who will travel to face Sporting Kansas City. If the team can get a result then, it will then return home for three straight games at Sandy. RSL will have a very good chance to climb the standings then.


This was a tough game to predict and one that left a lot of people stunned. Philadelphia was not trending in the right direction but traveled to Audi Field and walked away with a lopsided 5-1 victory. This is despite young Americans Brendan Aaronson and Auston Trusty both sitting on the bench.

Andrew Wooten looked very useful. Marco Fabian was one of the best players in the league this weekend and Alejandro Bedoya, now famously, played with a lot of emotion. Everything worked for Jim Curtin.

For DC United, things look terribly off and it has little to do with the injuries to the defensive midfielders. The latest news that Wayne Rooney is on his way out is very believable and one that will probably happen sooner than later. DC looks like a team where things might go from bad to worse quickly.