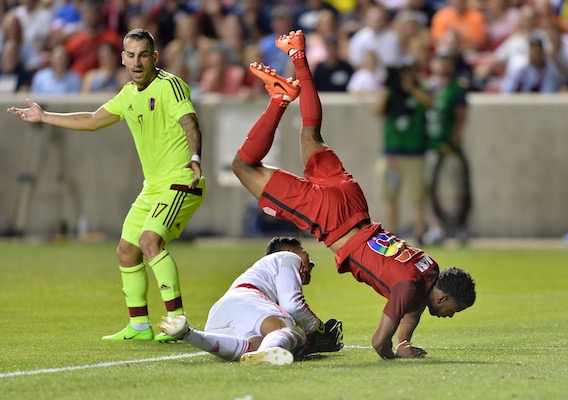 Wednesday had a lot of news, a lof of videos, and a lot of interesting stories. ASN's Brian Sciaretta is here to break it down for you
BY Brian Sciaretta Posted
January 23, 2019
9:15 PM
WEDNESDAY TURNED out to be a busy news day for American soccer for both on-field and off-field stories. The names involved were surprising in that it involved former legends like Landon Donovan and younger players like Mark McKenzie and Tim Weah.


Kellyn Acosta, 23, was recently released from the USMNT to return to his club after new manager Gregg Berhalter made cuts to his roster for the upcoming friendlies. While central midfield is tight right now with Michael Bradley, Wil Trapp, and Russell Canouse all vying for time, Acosta’s cut was eye opening.

But ASN has also learned that a seven-figure transfer bid for Acosta from an English team was rejected. By virtue of his 2017 World Cup qualifying and Gold Cup performances, the Texan actually qualifies automatically for a UK Work Permit.

The reasons for the rejection are probably many. Acosta is an important part of the plans for the Colorado Rapids and finding a replacement at this moment might be difficult. Also, FC Dallas owns a percentage of his rights from the trade last year, so Colorado would not see close to the full amount.

Either way, Acosta remains at Colorado for now.

The competition might be very low but all goals are important for young players. Weah’s confidence is soaring and he is moving extremely well on the field. It is exactly what he needed.

Andrija Novakovich, 22, scored his fifth goal in all competitions on Wednesday when his nice run and first-rate finish served as Fortuna Sittard’s 1-1 equalizer against Feyenoord in the Dutch Cup. Unfortunately for Novakovich, Fortuna Sittard lost 4-1 but the goal showed a high level of skill from the Wisconsin native.


Nice goal from Andrija Novakovich in the Dutch cup against Feyenoord. Fortuna Sittard trail 2-1 in the 75th #USMNT pic.twitter.com/DrC4TWZ5at

The most puzzling thing about Novakovich’s situation is that Reading FC, the club that owns Novakovich and is in a difficult relegation battle in the Championship, hasn’t found a use for him. It will be interesting to see what happens to Novakovich if Reading is relegated.

Landon Donovan, 37, announced his third comeback from retirement on Wednesday when he took to the radio and confirmed a Sports Illustrated report that he is going to join the San Diego Sockers of the indoor Major Arena Soccer League.

Donovan’s comebacks have gotten progressively stranger. The first comeback to the Galaxy made sense as he wanted to help his former club as it was fighting for a playoff spot while several players were injured. But last year he joined Club Leon in Liga MX in a move that was ill-fated. Now he is taking his trade indoor.

The former U.S. national team legend lives mostly in San Diego and is also part of an effort to bring an MLS team to the city.

It’s tough to draw any conclusions behind this and you don’t want to see Donovan tarnish his legacy. If he’s doing this for fun and to stay involved with the sport (since he might not have the fitness for the outdoor game anymore), it’s not a bad thing.


Caleb Stanko, 25, was a key player on the ill-fated 2013 U.S. U-20 team and has spent his entire professional career at SC Freiburg where he played in six Bundesliga games and five 2.Bunesliga games but featured mostly for the second team. Now he is returning stateside to join expansion team FC Cincinnati.

It’s a good move for Stanko who needs to finally play regular first-team soccer but it is hard to get an idea of the direction of Cincinnati. The new club doesn’t have much by way of a balanced roster and are overpaying for players like Stanko and Nick Hagglund. They have an abundance of defensive midfielders are using precious resources for redundant players.

When U.S. U-20 head coach Tab Ramos spoke to us here at ASN and even the Athletic, he opened up about how he is facing difficulties to obtain the releases of players he wants from within MLS. Historically, MLS has been among the most cooperative leagues in the world about releasing players for youth World Cups but the influx of mostly foreign coaches and technical directors into the league has brought a new mindset that doesn’t want to release players who are playing first-team minutes.

On Tuesday, new Philadelphia Union technical director Ernst Tanner admitted he is the subject of Ramos’ concern and that the player in question is Mark McKenzie – who starts for both the U.S. U-20 team and the Philadelphia Union. Tanner, who recently joined Philadelphia from Hoffenheim, explained himself.

“He could miss up to six, seven games … That has a major impact on us,” sporting director Ernst Tanner said Tuesday. “That has to be discussed with us, the player and the association. And we will do it when the right time is...I would say it is nice to play [in] that youth competition, but if you are an important player of a men’s competition, it’s for sure a bigger value.”

McKenzie is currently part of the full U.S. national team in January camp where he is the youngest player on the roster. He was a standout with the U.S. U-20 team in November during the run to the CONCACAF title

There should be a lot of sympathy for both sides. Philadelphia has been a great place for McKenzie to start his career. He is a 2000 minute per season player while still just a teenager. The club is paying his salary and is invested in him – and missing seven games could be huge. The league recently restructured its playoff format making the regular season more important (for purposes of byes and home-field advantage). At the same point, the league also has a history of respecting the youth World Cups and the desire of players to represent their countries.

As the league has matured, McKenzie’s situation will be a big test as to how highly the league values the U-20 World Cup in this era.

Duka's move to Albania is a positive reflection of the NPSL where he played in 2018 for FC Motown. A former MLS player, Duka helped carry the Morristown, N.J.-based club to the final where it eventually lost to Miami FC.

But Duka will now be looking to help Partizani win the Albanian Super Liga and qualify for the beginning stages of the UEFA Champions League. Partizani currently sits atop the league with 37 points through 18 games (which is three points clear of second place Kukesi). Despite its lead, Partizani has scored just 19 goals through 18 games so Duka will be expected to provide an offensive boost.

Duka is of Albanian heritage but has never acquired an Albanian passport. He will therefore be cleared to play once he receives a work-permit, which is expected in the next few days.


Congratulations to Dilly Duka on signing with Albanian Superliga power @fkpartizani . Dilly propelled us to the @NPSLSoccer final and was a joy to have in the club. We will be tracking this journey! #fcmotown #fkpartizani #NPSL #dillyduka pic.twitter.com/xhhWQJgGSK